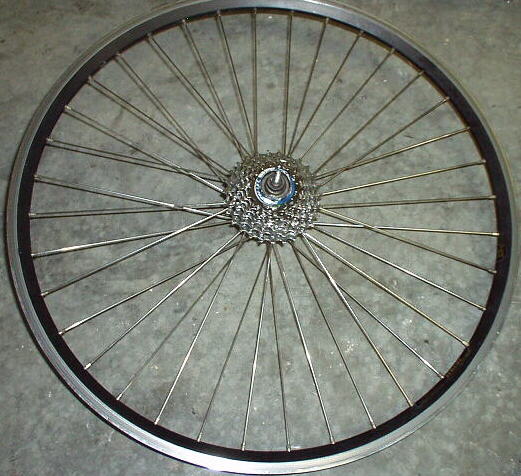 [Note: this is just one way to get a pre-2001 9-speed Campagnolo shifting system to work with a 9-speed Shimano cassette. There are other—perhaps better—solutions now including using a JTek Shiftmate or using a post-2001 9-speed Campy shifter cog (in the Ergopower lever) in conjuction with a pre-2001 Campy rear derailleur.

In ’99, I made the switch to a Campagnolo shifting system (Ergopower levers, crank, derailleurs, etc.), but wanted to retain my wheels with Shimano hubs. There were two reasons for this: (1) wheels are somewhat expensive ($200 for my set of Mavic CXP33 rims and Ultegra hubs), and (2) Campagnolo cassette freehubs are LOUD! This is one area where it is my opinion that Shimano has the edge: while coasting, my Ultegra hubs are virtually inaudible.

Fortunately, the spacing between a Shimano and Campagnolo 9-speed cassettes are similar enough that they can be adapted. In fact, according to some USENET newsgroup cycling enthusiasts, a Shimano 9-speed cassette can be used as is with Campagnolo components without any modifications whatsoever, as long as the narrower Shimano chain is used. However, perhaps because I was using a Sachs chain, shifting did not seem to be perfect, so I decided to modify the spacing of the Shimano cassette to make it more similar to Campagnolo’s.

I easily achieved this by cutting shims out of an aluminum can. Two shims add the required .3mm! Since there are 3 gaps between the 4 cogs that need to be 2.8mm, however, 6 of these shims are needed. I actually only used 5–just 1 between the smallest 2 cogs–and can report near-flawless shifting. Using 6 shims makes it difficult to install the cassette lockring. I also discarded the “built-in” shim/washer on the Shimano lockring.

See below for a step-by-step pictorial.

We are now several years down the road, any longterm observations?

I have made the mod and I am going to try it right now, I was having trouble with auto downshifting which I had been told was because of the straight Shimano cassette/chain with the Campy Ergopower/der setup.

Just read this and followed the step by step... worked like a charm! Brilliant. Still running a Campy chain, I have a Shimano one, but don't think I need to switch it til the Campy chain needs replacing. ↩Reply

Glad that the "kluge" worked. Thanks for your comment! ↩Reply

I just bought a used 1999 LiteSpeed with Campy shifters and derailleur. The wheels are Rolf Vector Pros, but were geared with a 12-23 cassette. I've ordered a Campy Veloce 9-speed 13-28 cassette because of the hills where I live.

My worry is that if there's ever a problem with the Rolf wheels, then what? Since I have some barely used Bontrager 9-speed wheels from my other bike, why not use those wheels as a backup. I had to buy them when I was on a week-long Cycle NC ride 2 years ago when my older wheels cracked near a spoke. So I don't want to not use those wheels that cost me $400, LOL.

That's when I found this page about using a Shimano cassette with Campy shifters and derailleurs. This seems like a genius hack, and I can't wait to try it out.

So I also ordered a SRAM 11-28 cassette to go on the Bontragers (the current cassette goes up to 32 and won't work with the Campy derailleur). I'm going to try your kluge (your words) on the new Shimano cassette on my Bontragers.

Thanks in advance - I'll let you know how it goes!

Hi Duane, thanks for stopping by my blog and for your comment. I hope the hack works for you! It worked for me for about a decade, after which I upgraded to a tubeless-ready wheelset and then a 2X10-speed drivetrain.

Please let me know how it goes. Good luck and happy cycling! ↩Reply