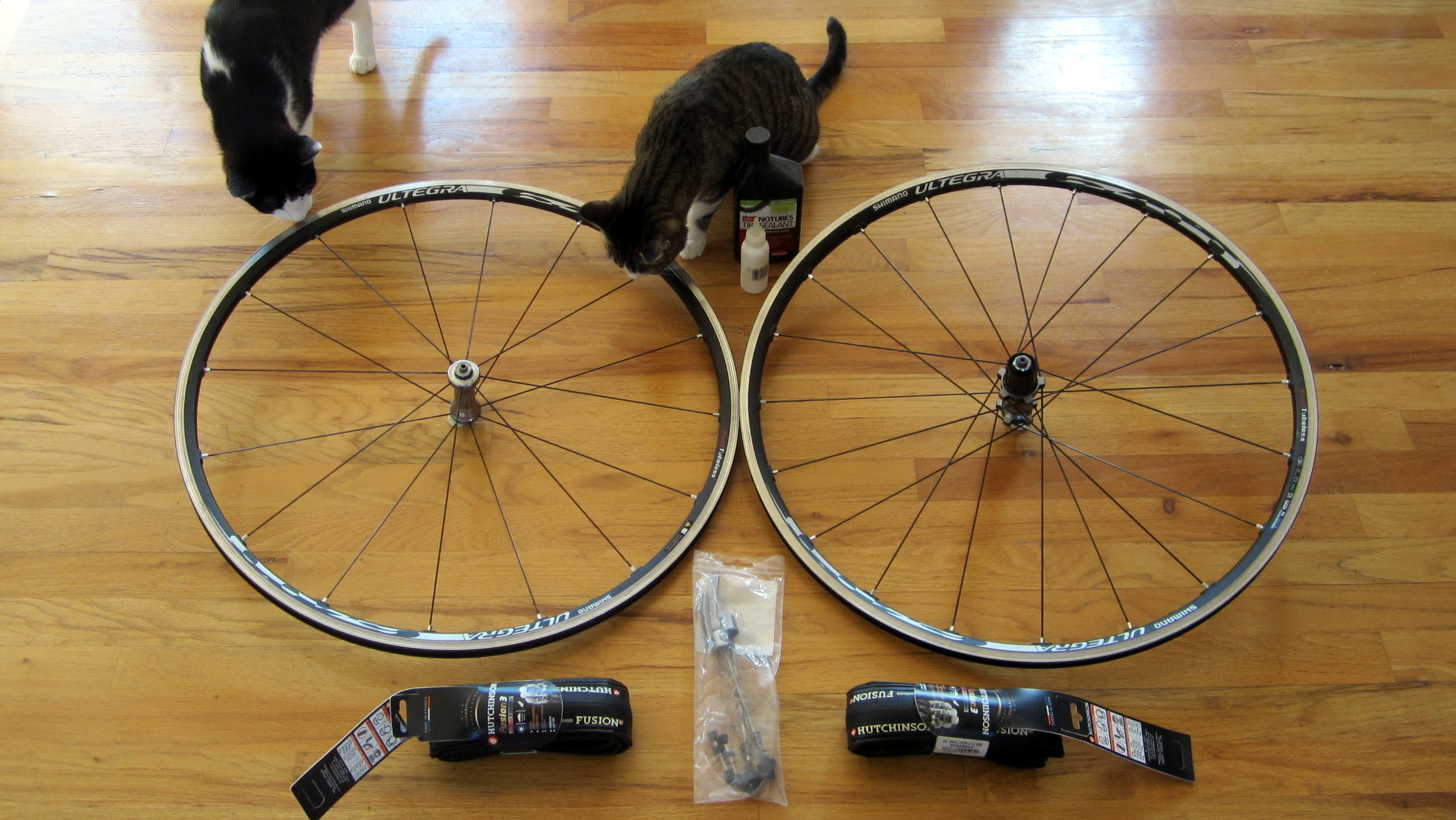 Many advancements have been made over the last decade for road bikes, such as BB30, tapered headsets, aerodynamic tubing, 11-speed cassettes, electronic shifting, and even disc brakes. But the technology I have been most excited about has been tubeless tires. Why? Well, considering that I have fixed between 150-200 flat tires in my lifetime, it is not too much of an exaggeration to say they are the bane of my existence. Tubeless tires promise to reduce the number I get in the future significantly by completely obviating pinch flats and allowing effective use of sealant.

You would think, then, I would have made the plunge into this technology sooner. Actually, I attempted to back in 2011. Before I did my first brevet of that year, I tried converting my existing Mavic CXP30 wheelset to tubeless by using Stan's NoTubes Road Tubeless Conversion Kit. Unfortunately, that was a complete failure. Maybe I didn’t use enough of Stan’s rim tape, or not enough soapy water, or wasn’t patient enough (the lack of an air compressor was another issue as I had to resort to CO2 cartridges and gas station air). Whatever the case, I could not get the tires (Hutchinson tubeless) to seal. [September 2016: I successfully converted a different wheelset. It’s a viable option.]

Ultimately, I gave up and tried using Slime ultralight tubes, which should have been in the running for Snake Oil Product of the Year: the tubes were so thin they punctured more easily than conventional ones, and the fluorescent green Slime almost never sealed the punctures. Perhaps Slime works fine for mountain bike tubes, but in high-pressure road applications, no. In fact, the Slime made it impossible to patch the tubes because the Slime would dissolve the cement or adhesive. The only benefit to the Slime was making it easy to see where the puncture was.

Anyway, so this year (after getting yet more punctures) I finally tried again, but this time using a tubeless-ready wheelset. I acquired a Shimano Ultegra tubeless wheelset from eBay, which not only are relatively affordable (~$350 lightly used) but at 1620 grams (measured weight) without skewers are nearly a whole pound lighter than the Mavic CXP30s. (See my “Canny Goes on a Diet Again” post.)

These wheels have sealed rims, rendering rim tape unnecessary. They also have a tubeless-ready rim profile that aids in easily sealing the tubeless tires when inflated:

Installing the tires was a little more difficult than the Michelin Pro3s, as they are a tighter fit. Using tire irons is absolutely essential. But with practice and better technique, installing and removing tubeless tires should only take a few more seconds than conventional ones.

Inflating them was surprisingly easy: I just used my floor pump! No CO2 or compressor was needed. After 20-60 psi or so (I forget how much), the tires made a satisfying sound indicating that they had firmly seated. Then I inflated to 90 psi, or about 15-20 psi less than I normally inflated the Michelin Pro3s to. With tubeless, there is no tube that can be pinched, so you can get away with lower pressures. In fact, the lower pressures are desirable as they afford greater comfort and, according to some, lower resistance. This is how, according to a Bike Rumor article:

The elimination of friction between the tire and the tube seems to provide a lower rolling resistance (think of how much faster tubulars are…) Tests by Specialized using their Roval wheels showed a 30% decrease in resistance. We are also able to run at much lower pressures (86-100 psi), which lets the wheel roll directly over variations in the road, instead of bouncing off of them (like when you have rock-hard 120 psi tires)…

Cyclocross magazine did some tests on this with the cross tires, and found serious increases in speed with less pressure.

There’s no weight penalty, either:

In fact, going to this setup yielded a weight savings of 18 grams per wheel. It could have been more if I didn’t inject 45 grams (1.5 ounces) of Stan’s NoTubes sealant, but why skimp on that trivial amount when that’s one of the beauties of going tubeless: having the ability to self-seal most punctures that might occur on the roads! (And if they don’t seal on the road, it is possible to insert a tube just like in the old days. I still will be carrying tubes one tube, just in case.)

What are the drawbacks of tubeless tires, then? I already touched upon that they are slightly harder to slip on the rim than conventional tires, especially when you haven’t got the leverage-the-tire-irons technique down pat.

Other drawbacks are due to use of sealant. For example, if you have to insert a tube on the trail due to a too-large puncture that the sealant can’t plug, then the goopy stuff in the tire makes flat-fixing messier. Also, Stan’s NoTubes sealant dries out over time, so it is recommended that every 3-4 months, you unmount your tires and scrape out the dried sealant (and then replenish with more sealant).

Personally I’d rather be doing this sort of maintenance in my free time in the garage, than having to change a flat in the middle of a ride on the roads.

Regarding injecting sealant, the Ultegra 6700 wheelset came with valve stems that did not have removable valve cores. So I wasn’t able to inject sealant through the valves. Instead, I had to peel back a few inches of the tire and use a 2-ouce squeeze bottle with a narrow tip to inject sealant into the gap between the tire and the rim. This was easy peasy, actually.

Will I have significantly less punctures, at least on my Cannondale 3.0, which is the only bike I have thus far equipped with this newfangled setup? Only time will tell, and you can be sure I will be reporting back later in the future about this. I am optimistic, though, as I’ve heard many good things about the sealing powers of Stan’s NoTubes.

In the meantime, I am enjoying the resilient, comfortable ride of these tires, as the lower pressures make even my “harshest aluminum frame in the world” seem plush. I am planning on converting my Cannondale F700‘s mountain bike wheels as well with a conversion kit.

I was biking home from Colorado State University and the rear tire started hissing for about five seconds but stopped. When I got to a red light I looked at the rear tire, saw a wet part, and yep, sure enough, it was wet sealant. So I experienced my first puncture after 206 miles of riding. But the sealant had sealed the hole! I biked the remaining five miles home with minimal loss of air. No flat repair necessary.

I am sold on tubeless road technology!

I completed the 4,233-mile Trans Am Bike Race without a single flat using tubeless tires. Ever since switching over to these in April 2014, I have yet to need to repair a flat tire on the road. So I continue to strongly recommend tubeless road tires.

I successfully (and rather easily) converted my lightweight Yishun 27mm Alloy Clincher road wheels to tubeless; see this article on how. It contains a video you can follow to do a similar conversion.

My Mavic Heliums are 1635 grams according to Weight Weenies. I remember when they were among the lightest wheel sets on the market. That's progress for you! Keep us up-to-date on the number of flats you get in the future with these tubeless tires. ↩ Reply