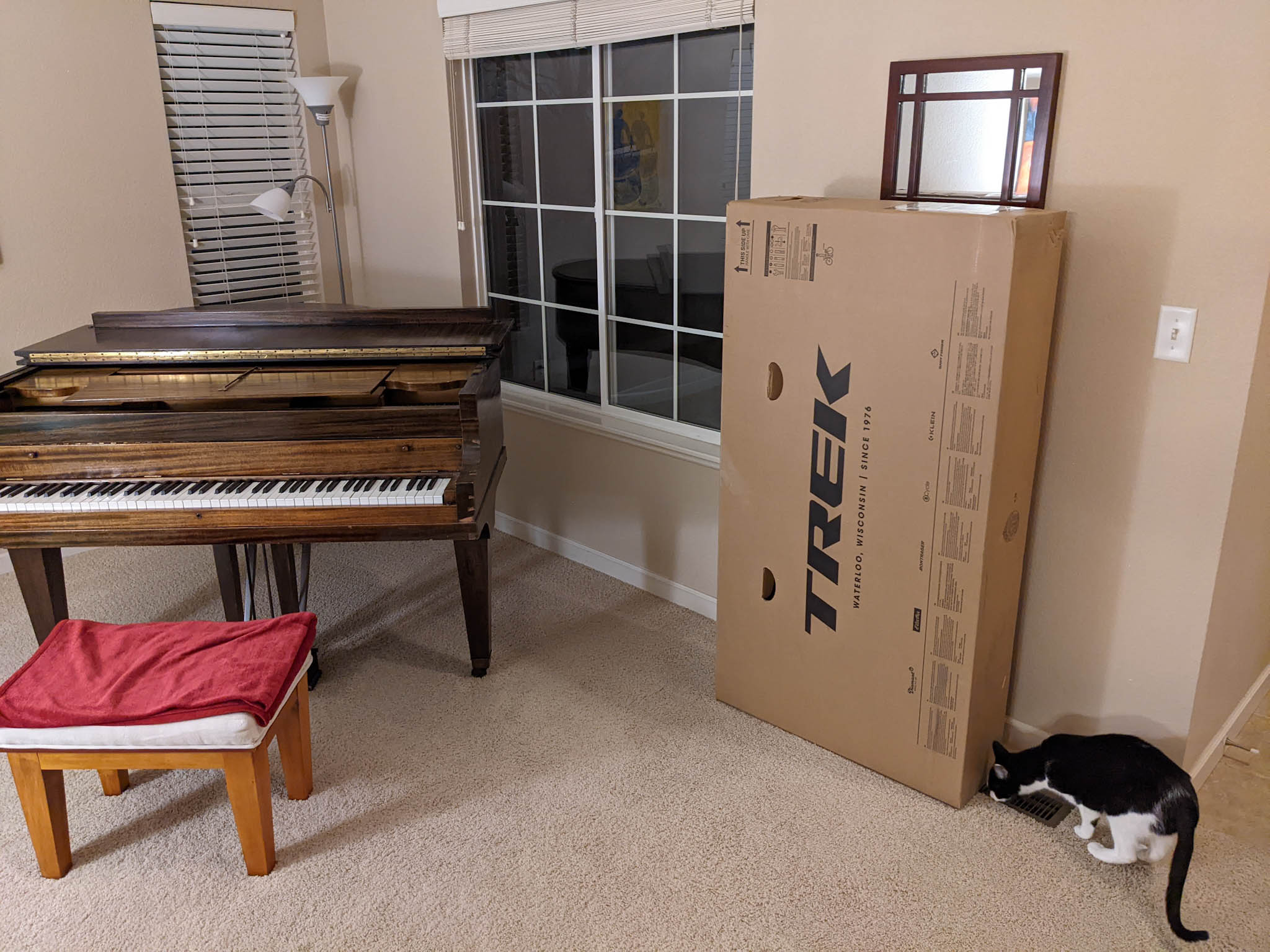 This article outlines my experience shipping a bicycle to Spain for the purpose of a move. Spanish Customs taxes shipments differently depending on the reason. If it’s for a move, the tax will be much less, but the documentation burden will be a lot more.

It would likely have been less expensive to bring over a bike to Spain with me on a plane instead of shipping it, but as I was already somewhat anxious about bringing a cat with me, I didn’t want the additional hassel of having to deal with a huge bike box. So I decided to ship it.

The cost of doing so was about $450, which is not cheap but still worth it. This is because I had six bicycles at my Colorado home and it would not be easy to sell any of them, especially the bike I wanted to ship over (the “Super Bike,” which has an integrated seat post that makes resale especially difficult). Also, I would not be able to buy a bicycle in Spain anywhere close to the Super Bike’s quality for only $450.

First, I got a free cardboard bike box from a local bicycle shop, as I had already described in a previous post:

Then I shipped the bike through bikeflights.com. Their customer service was very good, walking me through the whole process and following up and communicating with me during the weeks the bike was in transit. This was appreciated because the process turned out to be not easy.

This is all the documention Bike Flights requested, which I submitted to them in English. This is in addition to all the usual shipment details (to/from addresses, box dimensions and weights, etc.)

Regarding #4–the odd value of $96.85, Bike Flights explained when I inquired about it,

We use a $96.85 fixed value to clear used, personal items with customs. This way you are not charged market rate duties and taxes at import, since these are your personal items that you alone will be using. It’s a value that we’ve hammered out with our UPS partners for sending personal items internationally, and it’s important that the language is consistent at customs to ensure proper clearance.

They also advised me that if the item being shipped had been owned for less than six months, customs will consider this a commercial shipment and different documentation will be required. This was not a problem because I had owned everything included in the box for many years.

However, I was not able to put anything in the box that was not bicycling related. I initially wanted to stash a cat water fountain, Go Pro mounts, and a water bladder in there, but they told me to take those out so that Customs would not consider it a commercial shipment. I was allowed to include bicycle clothes, shoes, helmet, tools, and mini-pump, however.

I packed the box and UPS picked it up a few days later from my doorstep on February 2nd:

Then, per tracking number, the box arrived in Madrid Customs just two days later, on February 4th! But this is when the “fun” with UPS Spain started.

Spanish Customs first called my girlfriend, as it was her phone number that I had provided them with. (At the time, I didn’t have a Spanish phone number, which was required for Spanish Customs.) She had them email me what they needed.

They basically requested everything that Bike Flights had requested of me. So I sent them that documentation… but with all of it translated into Spanish.

I thought I was good and done until UPS Spain started emailing me a couple weeks later. That turned out to be a frustrating experience.

First, they requested the following:

I sent them the above, in Spanish. Apparently it wasn’t enough and they asked for yet more documentation:

De no contar con los documentos anterior se hará despacho a consumo. (If you do not have the said documents, the goods will be “dispached to consumption.”)

This is where their request got confusing, and the UPS agents were of little help in clarifying. I sent them a copy of the plane tickets to Spain, and a letter I wrote explaining I lived in the U.S. for many decades, but that I didn’t have any service bills for where I was going to be living in Spain. (In hindsight, I guess they meant they wanted service bills of where I was living in the U.S. to prove that I lived outside of Spain for more than 12 months.)

I asked specifically what documents did they have in mind. Credit card bills? Tax documents? The UPS agent was not helpful. Instead, she kept copy and pasting a lot of the above.

Ultimately, I sent a PDF file of my entire passport including the country stamps, which showed that I hadn’t traveled outside the U.S. from October 2019 through July 2021. I also sent a PDF document of all my electricity bills from the last 12 months.

That turned out to do the trick. UPS replied a couple days later,

Le informamos que ya contamos con toda la documentación para la liberación de su envío. Actualmente está a la espera de revisión por la aduana para luego ser liberado. (We inform you that we now have all the documentation for freeing up your shipment. It is currently awaiting review by Customs and then will be released.)

Finally, eight days after that confirmation… the bike box arrived at home in Galicia!

In sum, the shipment arrived exactly four weeks after I had sent it from Colorado. I also spent maybe an hour in preparing documents for Bike Flights, three or four hours in getting the bike box and packing it, and another three or four hours dealing with UPS Spain and preparing all the documentation outlined above in Spanish. I also wrote about a dozen emails to Bike Flights and UPS Spain.

Due to some domestic travel and other things to take care of, I didn’t get around to putting the bike together for a couple more weeks. At the time of this writing, I still haven’t even ridden the bicycle in my new country, but I am certainly looking forward to doing that soon.

Thanks for the write-up! I'm literally going through the same thing right now. I'm located in Valencia, and I want to ship my bike from Oregon.

However, as you have alluded to above, I got smacked by the Spanish Bearocrocey and a hefty bill of 700 bucks!

With no guarantee of an arrival date!

I'm glad I found this (recently published) write-up as I have changed my mind, I'm gonna leave my bike-packing bike back home in Oregon and just ride my Roadie for the meantime...!

Yes, it can be a bureaucratic nightmare to ship a bike to Spain, as you have discovered. I think if I were to bring over another bicycle, I would check one onto a flight with me instead.

Have fun riding your road bike in Valencia! ↩ Reply