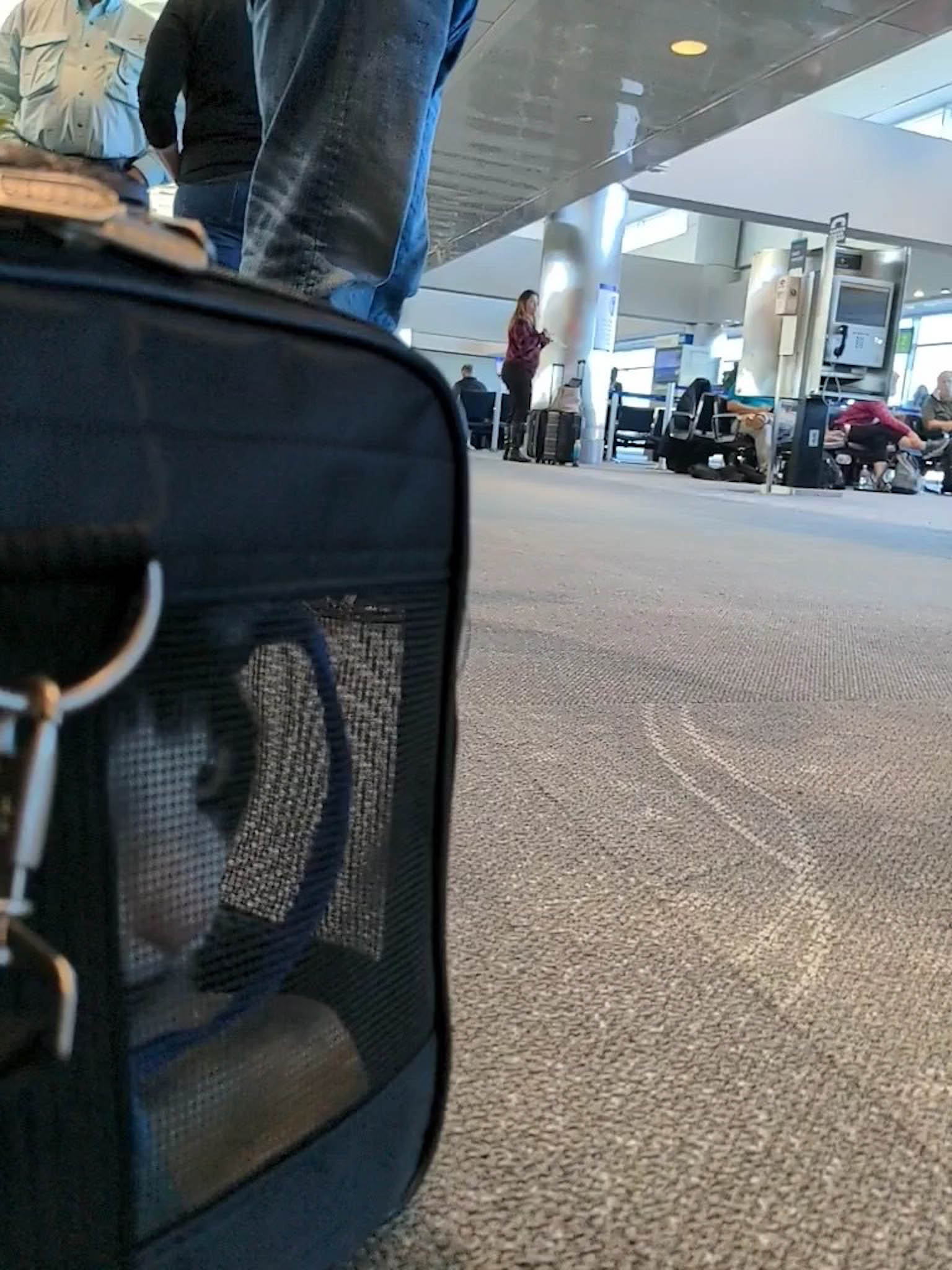 Being a minimalist made moving to another country less intimidating than it otherwise could have been. So did retaining my house in Colorado as a vacation home, as it meant there was markedly less stuff I had to sell or otherwise dispose of. I knew from a two-month “practice run” last year that all I really needed to bring was a laptop bag and carry-on suitcase. Such is the life of someone who is effectively a digital nomad.

But one thing that I was apprehensive about was taking my cat. Oreo, you see, is a bona fide homebody. He even protests and panics for his life during once-a-year, eight-minute drives to the vet for an annual checkup. How in the world was he going to handle a day-long journey to another country necesitating multiple flights?

Fortunately, even though I had zero experience doing this prior, plenty of other people did. This included the woman who was cutting my hair and whose dream job was to be a caretaker on the “Cats Islands” of Greece. Her partner, she told me, rescues cats and flies with them all the time. Talking with her made flying with only one cat seem easier than making a dessert from cake mix. If only!

There still was the whole process of executing the move. It can be summarized as follows:

More about this online certification process, and its requirements, is at the USDA’s official site for pet health certificates for Spain.

Since Oreo would be flying with me in the cabin, the cat carrier had to fit underneath the seat of the airplanes we would be going on. A soft carrier made the most sense since the space beneath the seats on airlines are all different. Being made from fabric, the carrier can be scrunched down a little to fit beneath the seat.

Due to Amazon reviews and reputation, I purchased a Sherpa Original Deluxe pet carrier. The Amazon listing said that it was “approved for use on most airlines and included in Sherpa’s Guaranteed On Board program.”

It turned out that the Guaranteed On Board program is only guaranteed for domestic flights.

More concerning was that Delta said this for international flights:

The soft- or hard-sided kennels must be leak-proof and have ventilation openings on three sides (four sides for international travel).

Unfortunately, I only saw the above after receiving the cat carrier—and the Sherpa Original Deluxe only has ventilation openings on three sides. So I wrote Worldwise, the Sherpa’s parent company, about this, asking if I would be forbidden from using it on Delta. They replied,

The mesh on 4 sides requirement is a newer addition to Delta’s international pet carrier policy. I would contact Delta directly to clarify the specifics of their policy, but I would think that if you’re able to open the top zipper without your pet escaping, that it could count as an additional side of ventilation.

I believe only Delta has the 4 mesh panel requirement so you should be fine with United. They’re one of the more accommodating airlines to in-cabin pets.

Ultimately, I flew on United so I did not have to worry about the four-side ventilation requirement. I did bring a lot of safety pins, however, in case the zippers failed (they didn’t)!

Things for the Flight

For Oreo, I packed the following:

February 4th was move day. I gave the cat carrier about six whiffs of the calming spray before putting Oreo in there. My friend Matt picked Oreo and I up and drove us to the Denver International Airport.

Here is Oreo patiently waiting for the first flight:

The first flight to Newark, New Jersey was about 3.5 hours long. Because I spent the whole night before doing last-minute cleaning of my Colorado home, I was plenty tired and slept all but a few minutes of the flight.

During those few minutes I thought I smelt some urine. Oreo also was being very talkative—fortunately there was no one sitting next to us. I thought to myself, “Oh no, I’m going to have to change those pee pads at the airport,” and went back to sleep.

Inside the Newark International Airport, I found a pet relief station that even had bins of kitty litter. However, Oreo refused to use it despite giving him two opportunities to.

Actually, after the first flight Oreo was very mellow. Here he is on a counter at the Newark airport, waiting while I ate a dinner comprised of a $60 filet mignon that was ordered and paid for by a random traveler. It hadn’t arrived by time he had to board his flight, so he generously offered to me.

On the 7.5-hour flight to Spain, Oreo was exceptionally calm. I guess he was accustomed to this by now. Once again, I slept throughout the entire flight.

When we got to Madrid, I quickly got through customs. There was no one else who had anything to declare so I did not have to wait in line. The customs agent looked at the health certificate, recorded some things in a book, successfully scanned Oreo for the microchip, and we were on our way.

Unfortunately, despite rushing… we couldn’t make it to our third and last flight in time. This is because the second flight was delayed, mostly because of a wing de-icing procedure. Fortunately, Iberia had another flight to Santiago de Compostela just three hours later and they had room for us. (I think, but am not sure, that Iberia only allows one pet on each flight–which is why they need to pre-authorize the pet. So we were lucky no one else was traveling with a pet.)

At the Madrid airport, I couldn’t find a pet relief station, so I went to a small family bathroom–basically a small private bathroom with a lockable door–instead and set up the kitty litter box for Oreo. However, he refused to use it and also wouldn’t eat or drink. I was amazed by the fortitude of his bladder!

It was a relief to get on the third and last flight, as that one was only a little over an hour long and by that point I knew there was nothing going to stop us now. Oreo was very popular with the ladies sitting around us on this flight. In fact, after we landed in Santiago where my girlfriend Andrea picked us up, we stepped into an elevator that those ladies were and they cheerfully exclaimed, “¡Oréo!”

Once we arrived home in Spain, the first thing we did was put some food and water out for Oreo. He took to the food immediately, having not eaten for nearly 24 hours.

Unfortunately, the first evening he refused to use the kitty litter box that Andrea had gotten for him, mainly because it had litter of the silica type that he was not used to. The next day we were concerned enough that we found a 24-hour market that was open on Sundays that sold some “regular” (clay) kitty litter. We loaded it up in the box and Oreo used it immediately. What a relief it must have been for him! It was only later that I read that cats can “hold it in” for 24-48 hours if necessary, and Oreo is proof of that.

In conclusion, flying with a cat was not so bad. But I’m sure that Oreo is glad that he will probably never have to do that ever again.