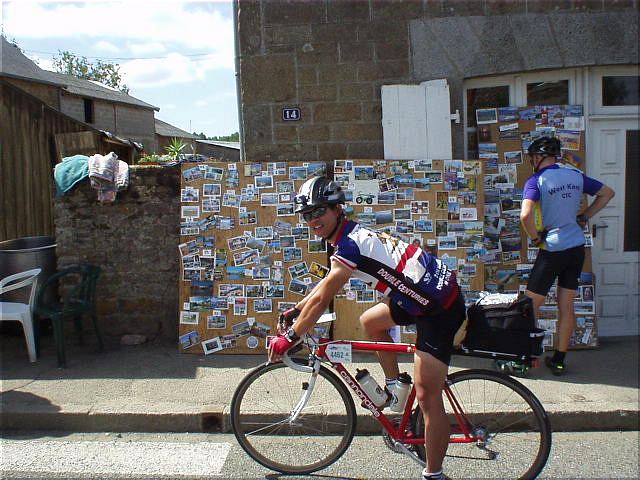 Paris-Brest-Paris is the granddaddy of all ultra-cycling rides as it is the oldest amateur cycling race in the world. A 765-mile continuous bicycle race that was first held in 1891, it is older than the Tour de France and modern Olympics. Sometime after college, riding in it became a major dream of mine, one that was fulfilled in August 2003.

I completed it in under 85 hours, or three days and four nights with a total of 12 hours of sleep (5 hours with 35 miles to go), often in random fields underneath a tree. It was a marvelous way to tour the countryside of France, such as Brittany.

Here is a collection of multimedia to recreate the experience.

These were first presented at a 2004 Annual Dinner at the request of the MG Owners Club.

[Note: links below no longer work. I keep them here as something of a time capsule. Anyone remember when Alta Vista was one of the foremost search engines?]

How I Qualified for PBP

Thanks to Mike Jacobsen for the data below. He was following PBP online and entering the time splits into an Excel spreadsheet, which turned out to be a really good thing because the data was no longer available after the race!

Below are some miscellaneous notes about the race not included in the PowerPoint presentation.