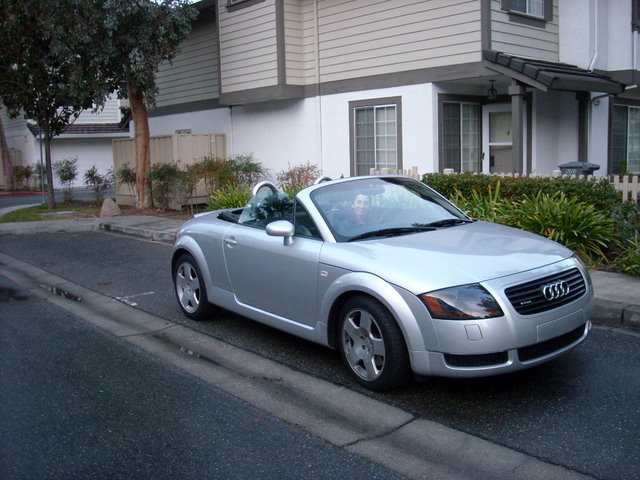 PS I got a deal for mine as well. One owner, who treated the car like gold and put less than 8k miles on it for the 3 years he owned it! :) ↩ Reply

Hey I just got a tt as well. An 04 hard top in yellow. Mine also says 99.59h cuz it maxed out but I don't know how to reset it! I know it's on the wiper bar but when I press the reset button everything goes away and doesn't reset it. Or tell me the mpg. Can someone plz help? ↩ Reply

Congrats on your '04! To reset the hour counter, press (hold down) the same reset button for 1-2 seconds. It will then reset to 0. Same goes for the other functions -- e.g., to reset the average MPG, toggle the switch at the end of the wiper bar to the average MPG screen, then hold down the reset button. ↩ Reply

How does the latest iteration of this roadster look like? I hope the current models are much better at handling the wind noise and buffeting issues. The problem was so overwhelming on my drop top that I had no other option but to mount an additional wind deflector. But after the retrofit, my cabin is hush and the roof-down cruises are truly delightful thanks to the BackBlade windblocker. ↩ Reply

Hi JS. The latest iteration (third generation) of the TT Roadster looks very similar to the first generation, more so than the second generation! They look so similar that I think I will save $40k and hang on to my current TT for at least a few more years. :)

But I think wind buffeting the my first generation TT Roadster is pretty good---at least with the rear wind screen and both windows rolled up. With the windows rolled down, the rear wind screen does not make much of a difference. Wind buffeting is far better than my former MGBs, and a bit better than the Alfa Romeo Spider and BMW Z3 Roadster I used to own.

Sounds like you have a good solution, though. The BackBlade windblockers look pretty nice! ↩ Reply

Wind buffeting is kind of a norm on roadsters. Some have a lot, some have less. Well, coming to wind deflectors... I have a Windblox windblocker on my ride and it's pretty good at tackling the buffeting. I must say more than 90% of the buffeting and turbulence have been cut down by this equipment. ↩ Reply

Yeah, I too agree with you on that. Backblade windblocker is quintessential equipment when it comes to tackling wind noise and turbulence. In fact this accessory was suggested by my car technician after having had to put up with the overwhelming slap of wind on my noggin. ↩ Reply