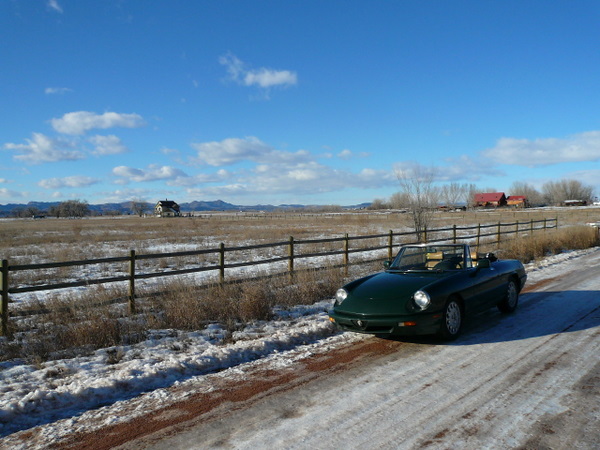 This year I am spending the holiday and new year in California, so it was time to say goodbye to Fort Collins for the last time in 2007. How did I do so? With a brief jaunt along some back roads near my home, just north of Fort Collins and south of Wellington. Larimer County land, I think.

Of course, even with still some patches of snow on neighborhood roads which are not plowed (except in extreme cases), I was still driving with Elaina‘s top down as I had been for most of the December (actually, the entire year). We haven’t received any rain since mid-October, and it had snowed only three times up until I left.

Meanwhile, I can attest there is nothing resembling snow (and much less, mountains) in Stockton, CA. But it’s not all bad. I have some family and friends here, and this morning I was even running in a T-shirt and shorts. My hands were cold because I wasn’t wearing gloves, but otherwise it was very comfortable.

Stay tuned as I write about adventures from the ‘hood (soon).