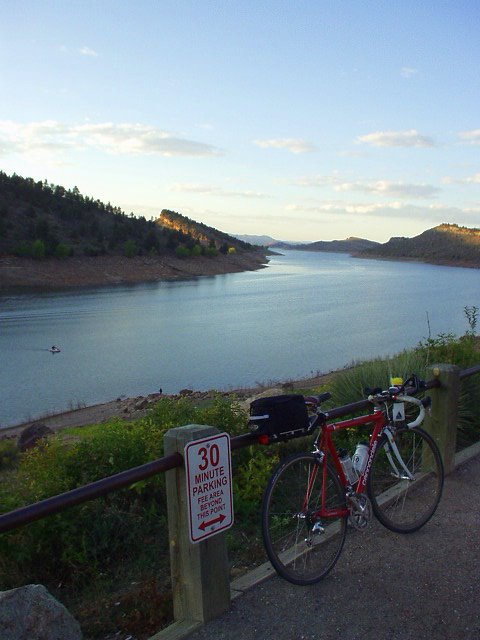 Earlier in the year I reported how the bicycle-crazy city of Fort Collins seems to have some sort of cycling event every week. Well, add yet another one. A major one: the National Collegiate Cycling Championships!

This is great news for a city which has already hosted the United States Masters Swimming 10k Open Water Championships in 2006, going end-to-end in the Horsetooth Reservoir (crazy!). The Coloradoan explains,

The 2008 and 2009 national collegiate cycling championships are coming to Fort Collins, bringing with it 500 racers each May to the city selected because of its bike-friendly attitude and scenic courses.

The Colorado State University’s cycling club, boosted by local enthusiasts and business leaders, worked to secure the event, which will include competitions in a time trial, road race and a downtown criterium. USA Cycling is sponsoring the championships, which will take place May 9-11 of each year.

The interesting thing is USA Cycling is actually “dumbing” down the course:

For the most part, the courses are the ones used by the Fort Collins Cycling Festival, although Taylor said they had to modify the courses to eliminate some of the hills, especially in Rist Canyon.

While cyclists from, say, Florida, are as fit an any from Fort Collins, they just aren’t used to riding down hills, Taylor said.

USA Cycling was “worried it was too challenging for people who had never ridden up a mountain, let alone down one,” he said. “In Florida, their idea of a hill is an overpass.”

“Too challenging?” Those wimps! Okay, so I can confirm that some of the hills west of here (particularly Rist Canyon) ARE challenging, but still…

Hopefully, those flat-land wusses can at least change their own flat tire. But if not, Fort Collins again will have them covered. This is because in the same issue of the Coloradoan, there was another article about the Fort Collins Bike Co-Op:

The Fort Collins Bike Co-op will pay $5 a year to lease prime downtown real estate, thanks to City Council.

The council recently approved the lease agreement at the old Fort Collins Creamery, 222 LaPorte Ave., for the volunteer-based nonprofit organization that refurbishes donated, abandoned and recovered bikes and gives them to low-income families.

Pretty cool. I’ve never gone into the Bike Co-op for help, but it’s been in Fort Collins for a little while, and have only heard good things about it. Sounds like a great service to help people spare the air from some greenhouse gases, get some exercise, and experience the joy of cycling.

The final good news for the Fort has to do with proposed Fort Collins Velodrome. It still seems to be on track (ha, an unintended pun!) to be built sometime in the next 2-4 years. It’s a little ironic that Fort Collins was able to get the National Collegiate Cycling Championships without it, because attracting a national competitive cycling event was one of the reasons given by the FC Velodrome Association for it.

Well, there’s hope for some track championships in Fort Collins sometime after 2010.