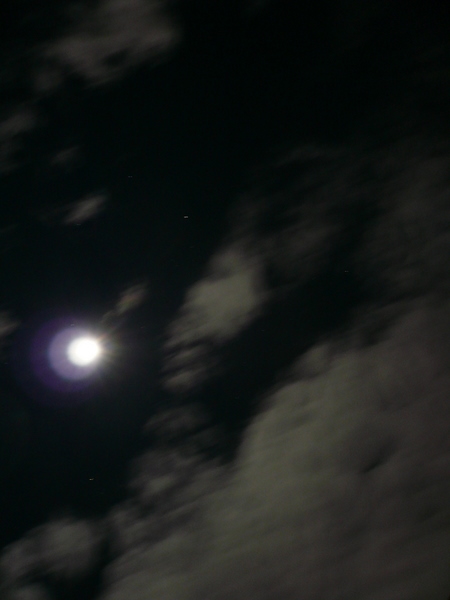 Today—as per annual tradition—I celebrated the Winter Solstice at my church which is the Great Outdoors. But unlike in previous years, this was not just a solitary bonding with Mother Nature or an introspective exercise on top of some mountain. This is because today’s ritual was held with others from the Fort Collins Trailrunners.

Never mind that it does get chilly here after the sun goes down. Also never mind that where we ran (Horsetooth Mountain Park) is very hilly, there was still snow on the trails, and the Trailrunners are a Bunch of Lunatic Runners (read: fast!) No one was complaining. In fact there were a whopping SEVEN of us who came out to “run under a full moon” (a turnout of 2-3X our normal size), although Pete and Heather opted to hike instead of run, since Pete had already run 29 miles this morning. :O

In contrast, we ran “only” 7.5 miles. “We” included Alex, Dan, John, Mackenzie, and Steve. Alex and Dan did the 5-day, 106-mile TransRockies Challenge a couple of months ago; John had recently placed 2nd in his age group in a Christmas run; Steve has had top-10 or top-5 overall finishes in many races; and Mackenzie has qualified for Boston a bunch of times and is one of the most kick-ass runners of the fairer sex I’ve run with.

It soon became apparent that my, oh, five-miles-a-week “training” ever since the Boulder 100 had not prepared me that well for this. I never got dropped, but was at my limit quite a few times especially since—may I reiterate—the hills were Steep. We ran the Horsetooth Trail 8-Mile Race course and, obviously, it was dark. But it was not completely so, since there was the full moon out and many of us had brought headlamps. There was enough light that we all avoided doing a face plant, although a few of us (most of all, me) slipped or tripped a couple of times.

As we approached 7,000 feet in elevation halfway through, the full moon glowed above us with city lights of Fort Collins below. It was an amazing sight I wish I had brought my camera for. The temperatures may have been only 15 degrees but after the first mile none of us were cold and I think all of us really enjoyed running with each other.

Here’s to the days getting longer now, and a brilliant nighttime run on one of my favorite days of the year.