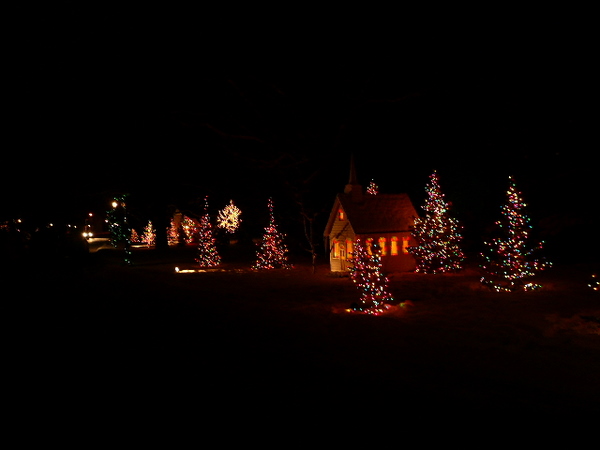 “It’s not that cold,” proclaimed my friend Nick, holding up his hands which he had already taken out of his gloves as we were running around like reindeer well after darkness had already set in last Thursday. [Note: yes, I’m a week behind in posts.]

Funny, those are words I am often accused of using inappropriately. In fact, just the other day Tori had mocked me for telling her that “it wasn’t that cold” after I had already sent her a photo of me x-country skiing in the neighborhood wearing gloves and a fleece headband. But on this day I was certainly thinking otherwise. At least for the first ten minutes. Then it really wasn’t that cold!

Or maybe it was. At least my camera thought so. It has a old Fiat-like habit of not working when it is too cold. And already after snapping a few photos of x-mas lights at Woodward Governor, it ceased to function. Kaput. At least until the two dozen of us (or so) from the Fort Collins Running Club had returned to the warm home of Allison and Art, who once again were graciously hosting this annual run.

Which explains why I have no photos to share aside from the one at the top. Oh, and this one!

But like last year (which was actually warm enough for me to drive over with Goldie‘s top down), this run of about four miles was a lot of fun—even if we (or at least, I) spent a whole lot less time admiring the lights. Instead, we enjoyed the company of the other folks. For example, there was Peggy and Pam, who told me about their Boston Marathon experience this year (a very wet one!) And Alene, who (like me) seems to have fully recovered from the also very wet Boulder 100 experience, so much so that she’s actually going to run a 48-hour race in Arizona on New Year’s Eve. Yes, 48 hours. Did I mention during the Boulder 100, she was ahead of me the entire time, went about 11 miles farther, and had a smile on her face the entire time (at least during the time I was actually still in the race.) Go, Alene!

Of course, there was also my friend Nick, and at the post-run potluck, Dana and Alistair. It was great to see and talk with Ron, Cathy, Allison, Art, Ping, Collins, and Jen again too. There were many others there too, but despite lingering there a while, I couldn’t make the rounds to talk with everyone. Well, next time.

In conclusion, despite the (ahem) cold temperatures and lack of photos, the X-mas Lights Run was once again a great event. I may have to bring a different camera next time, though.