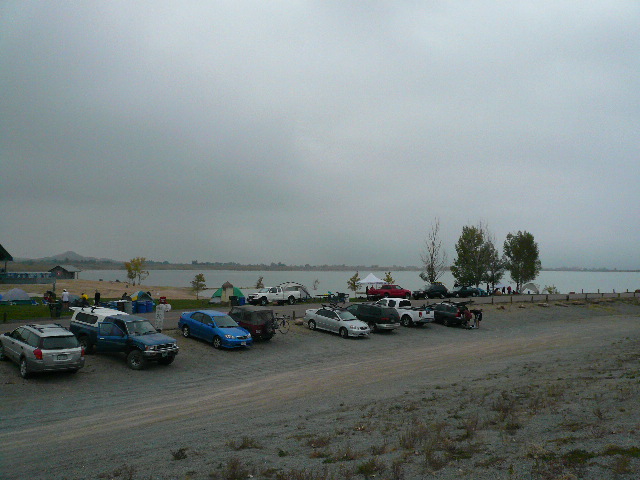 I’m done with the Boulder 100… or actually, since I stopped “early” (midnight), the 24 Hours of Boulder. The weather was cold and wet, my legs were not recovered from last week’s St. George Marathon, and I was not having fun. Still, I did manage to run 64.4 miles—or over 100 kilometers. Good enough.

Here are some excerpts from an email I wrote to a friend. My recovery season begins today, so no more running for me (say, over 5 miles/week) for the rest of the year. Exercise-wise, I’ll just be doing strength training and some occasional indoor rock climbing and yoga the next couple of months—nothing very time-consuming and just for health and fun.

I’m home… actually, got home last night at 2:00 a.m., but after taking a 30-minute shower to thaw, I was too exhausted to write. I spent most of today with my legs propped up, reading a book.

Anyhow, I only made it to Mile 64, stopping at midnight (after 15 hours). I wasn’t injured (not even a single blister, just unbelievably sore muscles), but just couldn’t handle being so utterly exhausted while being super cold and wet any more. It was raining all day (it still is… very unusual!), and my pace had slowed to a crawl—it took me 4:35 hours to go the last 14 miles (that is 19:40/mile pace). And that was “running,” not walking. I tried walking, but that seemed to require more energy to keep up even my meager pace. I was only slowing down, and I decided I was not going to spend another 15 hours trying to finish another 36 miles when I was so cold, wet and downright miserable.

Overall, I’m satisfied with the results. Though I didn’t achieve my primary objective (or rather, the second objective, since the first objective was to participate without injuring myself), it still was a personal best for distance (64 miles, or just over 100 kilometers) and length (15 hours). I also PR’d for 50 miles (10 hours 15 minutes) despite being handicapped by doing the St. George marathon last weekend.

Just don’t ask me if I’ll try to run 100 miles again. I’m convinced that ultras are much unhealthier and far less fun than marathon and shorter distances (or, say, century rides and triathlons), so I suspect the only reasons to continue doing them are for ego purposes.

October 16, 2007 Tue: Well, I can walk again, and I’m already thinking about doing a 100-mile “redemption” run (2008). I guess my ego is pretty big after all… it’s just too hard for me to back down from a challenge I’ve already taken up even though running 100 miles definitely qualifies as “totally unnecessary!”

Here are official results. Apparently, only six out of the 20 people who started the Boulder 100 completed the full 100 miles. Unfortunately, those six did not include me. Well, another day…

The Weather That Weekend

“In more than 30 years, I have not seen a storm like this on a game day,” said Gary Ozzello in Fort Collins, which had similar weather as the Boulder 100. See this article by the Coloradoan.

Felix! You are amazing. I hope you will break "non-training" to come to the lights run on Dec. 13.... Good job on your Boston qualifier. ↩ Reply

Congratulations on a herculean effort. I follow your blog regularly so for someone who clearly does as much endurance sport as you do it is eye opening to see how tough the 100 miler is. I'm about to run a 50 miler next month after a diet of marathons over the years, and frankly I find that daunting enough.

Thanks for putting your commentary out there and for being big enough to share your disappointment. If nothing else it will probably make you stronger for whatever else you go for next year.

If you get a chance check out Art Devany's blog where he discusses his theories of Evolutionary fitness (http://www.arthurdevany.com/). He seems somewhat anti endurance sport but some of his points about long term health risks of ultra events probably hold true. Just food for thought.

Thanks, Jim. I'm familiar with Art Devany's blog, and agree that his points about the long-term health risks about ultra events are probably valid. They're some of the reasons I am convinced that running 100 miles is simply not good for one's health. Being an endurance athlete, however, I could not turn down the challenge. My hope was I could have finished the Boulder 100, and then maybe do one or two more challenging ultras and be done with them, moving on to healthier activities. But it looks like that may be a little while longer...

Best of luck with your 50-miler! ↩ Reply

I am planning on doing the 24 hours of Boulder next year. I was wondering if there is a 50 miler in Boulder or the closest 50 mile race. I would rather not travel to another state if I can help it. ↩ Reply