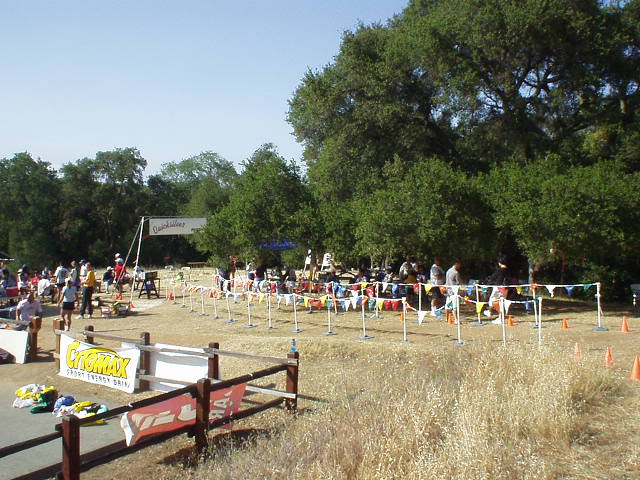 There was never any question in my mind that for this ultra-marathon that I should be running ultra-conservatively with nary a thought of time goals or personal records. After all, my longest run this year was only 20 miles, I had only averaged 11 miles/week in the last three weeks, and recently my running has been more off than Britney Spears’ singing. Clearly, this race was should have been approached as just an opportunity to do a “very fast hike” while taking in the views of oak and golden hills in the South Bay of California.

Don’t ask me why, then, was I chugging along the course from Miles 10-25 at an intensity I’d run a marathon, passing several dozen people while completely discarding the pre-race strategy of walking up each uphill and jogging like a weekend dog-walker the rest of the time. Maybe it was to release some pent-up frustration that for the first 1.5 hours of the race I was virtually forced to walk half the time behind all of the other participants who were doing so on narrow, no-passing-possible singletrack. During those first eight miles, I felt like part of a trail of ants all while being subjected to the occasional whiff of sunscreen, the loud banter of other runners chatting about the races they had just done, or the injuries they had recently suffered.

“This is really unbelievable,” I thought at Mile 27 or so, “just how good I’m feeling right now…”

Alas—quite predictably—my pace began to falter after about 50 kilometers (31 miles), but unlike my last 50+ miler, it was a steady, gradual decline in performance instead of a sudden crash-and-burn.

A couple of times per hour, I’d land on a straight right leg instead of a bent one, resulting in a very sharp pain underneath the kneecap. Despite the infrequency of this, it had the effect of goading me into running even slower, a message effectively communicated in tandem with my sore quads.

By Mile 37 I had another concern. “I have not gone to the bathroom even one time during this race,” I remarked to an aid station gal while chucking down a few cups of Cytomax, “and I’ve been drinking A LOT!”

The next four miles were almost all uphill followed by four miles of downhill on the exact same stretch, and it turned out I was actually faster going up than down (15:00/mile pace vs. 16:08).

Despite the slow and steady signs of running out of gas, with three miles to go I exhibited something similar to “horse barn syndrome,” like a horse picking up speed as he returns to his barn. But in my case the sudden speedup was actually attributable to “girl chasing syndrome,” as at that point not one but two very pretty women passed me, breaking stride as if they were just doing a 5k trail run, not a 50-miler.

I couldn’t pick up the pace enough to keep them in sight for more than five minutes, but eventually, my legs came back and I was running eight-minute-miles again instead of 16:00 ones. With the finish line in sight and the race clock reading 10 hours 30 minutes, I sprinted in as if all soreness in my legs was gone.

Twenty minutes later, I stopped by a toilet for the first time since five minutes before the race began. This means I went nearly 11 hours without taking a leak despite imbibing something between 8-10 pounds of fluids during that time.

Hmmm, so I did set a PR after all, just in respect to bladder control during awake hours!

I encountered your blog when I entered "Quicksilver" in the Google search. You were way faster than I was going in the first 50K, but I somewhat caught up with your time in the back end. Yes, those two women pass by me too. I suspect they trained well for the event. I followed them at miles 38-39 after they stopped at an aid station, but of course the next time I saw them was when they were coming back after the turnaround at mile 40.5. They said Hi to me and were very nice.

I suspect that I probably greeted you as you were running back in miles 40.5-45. It is my custom to say Hi and ask after runners on the course. I was one of the silly runners with the camelback.

Your description of the race brought me back. Very nice. I will link to it.

Thanks and have a great day!