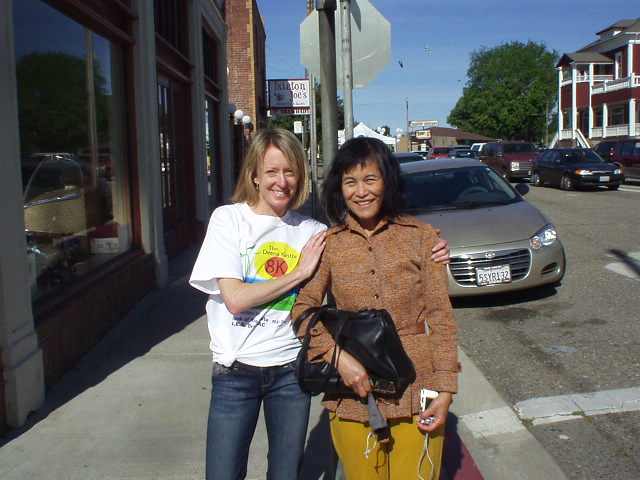 “Guess who will be in Stockton area when I am down there for my dad’s birthday?” I wrote a friend and fellow marathoner. “Deena Kastor!”

It turned out that Deena—America’s top long-distance runner—was going to be in the region as part of fundraising efforts for Tiger Bar Sports’ planned Olympic facility near Isleton, California. Isleton is a tiny Delta aquaduct town with a mix of historic and dilapidated buildings, some appearing to date back to the 19th century Gold Rush. It is sleepy beyond belief, although the new Olympic series may give it a shot of adrenaline. At least this weekend’s eight kilometer (five mile) run was sure bound to.

While my parents and I drove down to the start, my dad asked me how many runners there would be. “Seventy?” he guessed. I replied I really had no idea, but wouldn’t be surprised if as many as three-hundred attended. Deena was going to be there, after all—if not as a runner, then as a celebrity.

It turned out there were less than twenty participants.

Accordingly, it should not have been hard to pick out Deena from the “crowd” at the start of the race. At one point she was standing three feet in front of me while I was chatting with another runner, and even gave me a compliment about having broad shoulders. It’s a shame, then, that I did not realize that this was her until ten seconds before the start of the race—when the announcer pointed her out—and she had to leave before any of us finished running. Darn.

Unfortunately, this would not be the only missed opportunity of the day. The other would be the race itself.

From the gun, I was leading the race, and within a couple of minutes it was apparent only two other guys were even in contention. One of them was already breathing pretty hard, while the other seemed content to let me run out in front. Great, I thought—since they’re letting me dictate the pace, I’ll start out slowly and then pick up the pace later on and hopefully drop them.

It seemed like a good position, but—as they have not been ever since the Horsetooth Half-Marathon and during the weeks I did the Badlands 200km Brevet and FCCC Spring Warm-Up cycling events—my running legs were just not there. After 1.5 miles an 18-year-old took over the lead from me. Another two miles later, the other 30-something guy passed me up, and neither having the legs, energy, or lungs today, my pace continued to falter. As the two leaders slowly drifted away into the distance, I resigned myself to third place, neither being able to pick up my speed nor there being anyone within sight behind me.

I sprinted in the last 100 meters for a total time of 36:03. Yuck. My last five mile race was three minutes faster.

After the race I was greeted by my folks, who apparently had a chance to chat with Deena for 15 minutes while I was running. They even had a few photos taken with her. I thought this was pretty funny and very ironic considering that they’ve never really cared very much about running, whereas I do and I couldn’t even pick Deena out of a small crowd until it was too late!

At least, there were some other Olympians on hand, including Amy Acuff (three-time Olympic high jumper) and Jenny Adams (elite 100-meter hurdler). I spent a lot of time talking with them, getting their autographs and all. In fact, I spent so much time clinging onto Jenny that eventually a dude came up to me to introduce himself as her boyfriend. Heh.

So I thought they were pretty hot, and apparently I am not the only one—both of them had some really nice model shoots in magazines such as FHM (Jenny) and Playboy (Amy)! Here are photo spreads for Amy and Jenny.

I just mapped out the course online and it appears to be 5.3 miles—which was actually what I had speculated to one of the race organizers after the race. In that case, my race pace was 6:50/mile instead of 7:12/mile. That seems right and at least sounds a little better. That’s still off of my pace from last runs I’ve done of this distance, but I’m okay with that!