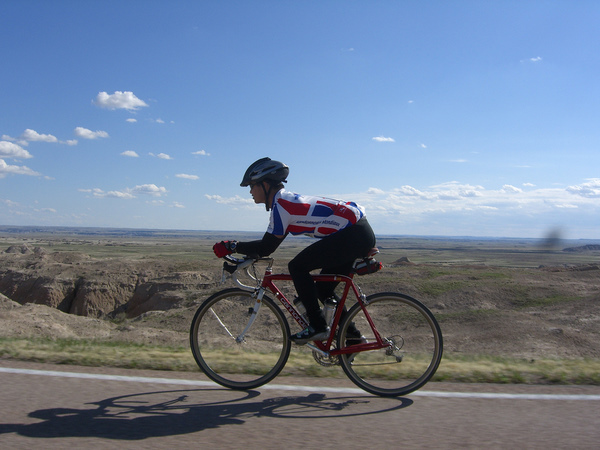 Even before I hopped onto my bicycle and commenced riding, I could tell this brevet through the Badlands of South Dakota would be unlike any other randonnée I had done.

First off, within the half hour before the start, cyclists were shaking each and every others’ hands like a delegation of international diplomats. Imagine! Granted, there were only eight of us representing the states of South Dakota, Montana, and Colorado, but such amity and cordialness among every participant before an organized ride is something I have not witnessed before.

Another wonderful thing about this 130-mile ride was the official cost: $0 despite being a certifiable brevet recognized by Randonneurs USA. Each of us were responsible for parking fees and obtaining our own food and drink at checkpoints (both of which were held at stores), but kudos goes to organizer Tim Rangitsch for helping the ride not be cost prohibitive for those who already had to spend, say, $75 in fuel just to get to and from the event.

The final distinguishing feature of this brevet was that it was held almost entirely within a national park—and a unique and scenic one at that.

Wikipedia describes the Badlands National Park in southwest South Dakota as a preserve of “sharply eroded buttes, pinnacles and spires blended with the largest protected mixed grass prairie in the United States.”

From a distance, the Badlands’ distinctive earthen formations resemble rock a la City of Rocks in southeastern Idaho. Upon closer inspection, the buttes are comprised of crumbly dirt that would quickly disintegrate trying to scale their sides like Spiderman.

But enough about the scenery. Here are some quick notes of the ride:

There were just two official checkpoints, one in the ultra-small town of Scenic, and another in Wall. However, midway through the ride, we passed by our own cars. Assuming one did not succumb to the temptation of “let’s just stop already,” this provided another opportunity to replenish on-bike supplies and refill empty stomachs with grub.

There was a strong and pervasive wind heading northeast. This meant riding into a wall of wind for hours on end heading out to Scenic and also out to Wall. But, it made for some sit-up-and-pretend-you’re-a-sailboat good time returning to the finish.

I was particularly intrigued by the Wall checkpoint. This is because it was at the famous Wall Drug. If you haven’t heard of Wall Drug, you quickly would driving through South Dakota as there are billboards everywhere for it. (In fact, there’s even a billboard for it at the South Pole, 9,333 miles away!) Its claim to fame included giving away free water to thirsty drivers during the Great Depression. Coffee also still costs just five cents. Nowadays it looks more like a souvenir shop and café than a bona fide drug store, and one can imagine Tom Joad of The Grapes of Wrath wandering in to say hello.

Despite having not biked too much this year up to this point, I felt good the entire way as a consequence of the course not having many steep or long climbs in addition to taking it easy. With an almost complete absence of stop signs, traffic lights, and cars (except for some slow-moving tourists-in-automobiles in the afternoon), the ride was serene and mellow—excellent for relaxation and introspection.

It was well worth coming up for this ride at least once, given its uniqueness of the surroundings and the brevet itself.

There’s a campground located 1/8th of a mile from the official start, the start being the Cedar Pass Lodge in Interior, SD. How convenient!

One of my Badlands pictures above was used as the featured photo of the May 25, 2022 edition of the National Motorist Association's Driving in America This Week newsletter. Thanks to Mike Jacobsen for noticing it and letting me know! ↩ Reply