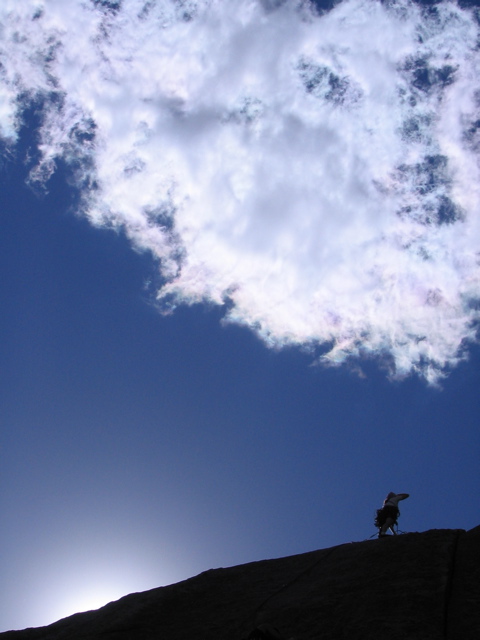 Just as I was really tiring of the drab desert scenery and was mentally ready to get the heck out of there, Tori and Chris saved me from the Southern Idaho doldrums by driving over from CA and inviting me to hang out with them for a day at the City of Rocks in Almo. What did we do most of the day? Climb some rocks, of course!

The most memorable climb for me was my first one. I had been lead climbing quite a bit in the gym this year so Tori and Chris offered to let me lead a slabby 200-footer called “Delay of Game” on the west face of Parking Lot Rock. While it was not terribly difficult, what made it a lot more challenging was that I did not bring up enough quickdraws! I think I brought up 8 (or maybe it was 10), and maybe about 50 feet from the top, I realized I was not going to have enough were I to clip into every single bolt. So I kept skipping bolts… I think at one point, I skipped two consecutive bolts. This augmented my heart rate levels a little bit since I knew that if I were to fall, I could be going down quite a ways before the rope caught me…

Fortunately I was able to keep my wits and at the top was the reward of meeting an attractive young woman named Jennie at the top who was something of a beginning rock climber. While I belayed Tori up next I learned that this woman was from Ogden, went to Weber State University, and was here as part of a rock climbing class she signed up for. Unfortunately I never got her number but this put me on a good first note with Ogden, the state of Utah, and their residents.

After this climb we went around the rock and did progressively harder and harder climbs including one where one really had to trust the feet. The last one we did, Tori did it brilliantly without falling, whereas I really struggled. I think this was a 5.10 or 5.10c.

The day ended with us eating at the only restaurant in Almo (population: maybe 20). The food was really good and virtually all of the climbers from the day were eating here. We slept in the log cabin that Tori and Chris had reservations to 100 feet away and had a good night’s sleep.

This was a wonderful way to leave Idaho on a good note after the last sour days of seeing just brown hillsides.