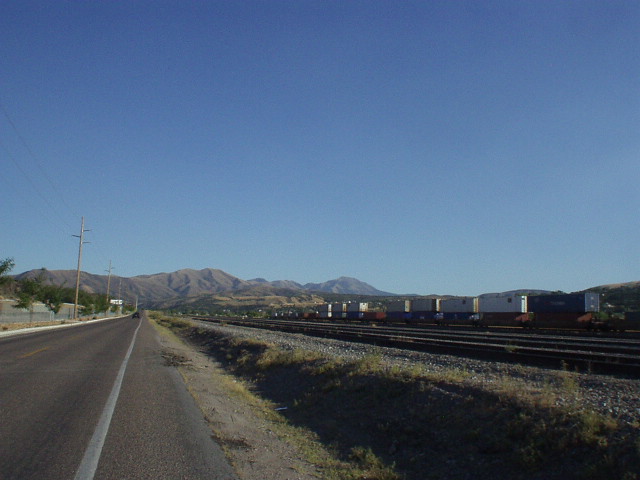 Of the two most significant small towns in southeastern Idaho—Idaho Falls and Pocatello—I enjoyed Pocatello the best. There are much more hills which almost completely encircle this town and demographically—with the students of Idaho State University comprising a significant portion of the population—it has a much younger feel to it. That said, much like Idaho Falls, the foothills of Pocatello are brown and devoid of trees; the town feels abandoned at times; and aesthetically, it looks somewhat run down. Here are more impressions:

Every time I read the local paper, the ultra politically conservative nature of the town (and perhaps the entire state of Idaho) is revealed and gives me pause. Op ed’s and articles in the Idaho State Journal like the following are abundant (this one from Monday, September 5, 2005):

When England and the U.S. continually let their borders be infiltrated by foreigners including Arabs and other Muslims, they deserve to be hit by terrorism.

When we allow mosques to flourish in all of our major cities, from the liberal mecca of Ann Arbor to Boise, we deserve to be hit by terrorism. Those mosques might as well be foreign military bases.

If Saudi Arabia continues to produce terrorists and condone imams who foster terrorism with their anti-American rhetoric, then we need to seriously consider invading them. Especially since they are now manipulating the oil prices in order to damage our economy.

I also read in the same paper that less than 1/3rd of the population in Idaho voted for John Kerry in the November election, making it the most pro-Bush state in the union.

That said, everyone I talked to (maybe a dozen people, including a couple of people at a local bike shop that I went to buy some more tubes) here seemed really friendly. And despite the complete lack of diversity here, I never witnessed or experienced any hint of racism and felt very comfortable here.

Fast food restaurants are abundant, and the only ethnic restaurants in town featured Mexican and Chinese-American food. (As I was starting to get tired of eating salads and subways all the time, I looked for a Thai or Indian restaurant in the phone book, but no dice.) I did have lunch at a place called “Hong Kong Restaurant” featuring “authentic hong kong cuisine”, and the food was great! Never mind that this was probably the first Chinese restaurant I had gone to where all of the waitresses were caucasian!

The roads are generally in bad shape but at least many of them have dedicated bike lanes and traffic is really light in this town. I rode out to Inkam one day which made for a 30-mile out-and-back ride, and though the barren unshaded scenery was not to my liking, at least there were hills.

There are, supposedly, 30-miles of greenways along Ross Park and other sections of town… never mind that they aren’t exactly “green.” Good for running, however.

The town could be split roughly into 3 commercial areas: downtown by Idaho State University (it doesn’t feel like the “downtown” of other small towns like Coeur d’Alene, Bend, or Bellingham); Old Town (this feels more like a “downtown); and the northern section of Pocatello, especially Yellowstone Ave., which has a lot of strip malls and chains like Walmart, Walgreens, Denny’s, etc. Macy’s and Dillard’s is also here.

Though wages here are very low, there are some signs of wealth, including a people driving Audi TTs, a woman driving a new Nissan 350Z roadster, and an older guy driving a new Ford GT! These cars really stand out since almost all cars here are American. Most seem to be trucks or SUVs.

While I enjoyed my time in Pocatello, I would not consider living there.

I am a local and you pretty much got it right about Pocatello. As for your last comment, that it was nice but you would never consider living here, that's why I do. Because most other people don't. Thanks for the great review. ↩ Reply

pocatello is not desert if you actually go in those mountains they are full of trees! cedar trees are all over town and it gets very green in the spring till about the first part of july, but thats how it is all over the place! ive lived all over the country and find pocatello to be the prettiest city ive been to! ↩ Reply

Pocatello has missed the mark so many times throughout history. It seems shortsightedness permeates the locals thinking. (see the first comment for a perfect example of the typical thought process) Therefore, numerous (almost all) significant historical building have been razed and no thoughtful and meaningful development has occured.

The Sheeple here have been groomed to buy and consume foreign goods and eat at corporate franchises in the strip malls of ever expanding urban sprawl. Go Chubbuck? ↩ Reply

One of my Pocatello pictures above was the featured photo in the June 15, 2022 edition of the National Motorists Association's Driving in America This Week newsletter. Thanks to Mike Jacobsen for noticing that and letting me know! ↩ Reply