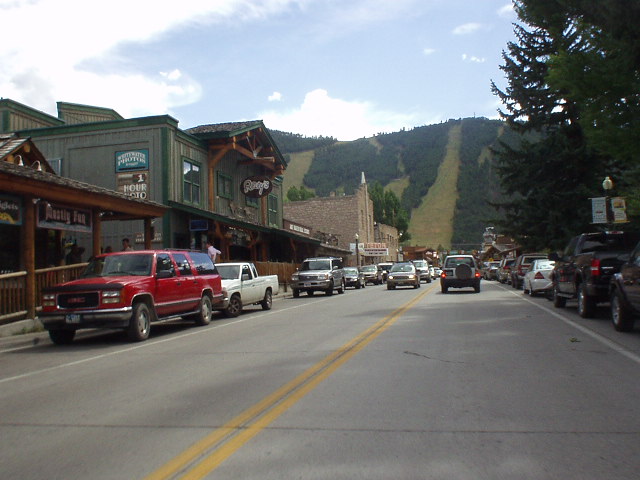 Jackson, Wyoming, is quite a tourist magnet with a lively “old west” downtown and being just south of the Grand Tetons. Luminaries who live here include Vice President Dick Cheney and other old guys with a lot of wealth. Below are more impressions I wrote in an email to a buddy shortly after my visit to Jackson:

Over the weekend I went through Yellowstone and Jackson, passing by the Grand Tetons. Jackson is a nice town all right, though definitely expensive (many homes cost $1-4 million). Condos are about on par with the Bay Area. 97% of the land in that county is protected, so the remaining 3% is really at a premium. A lot of tourists were there over the weekend, including 2 busloads of Japanese tourists.

If that’s one place you’d be interested in but would balk at the cost of living, I read in a local paper that the Idaho side of the Tetons, such as the town of Tetonia, is kind of like how Jackson was 20 years ago and is starting to become a little bit of a tourist magnet. Homes are way less (decent single-family homes are only $200,000) and supposedly some of them have views of the Tetons while still being affordable. I never went through there but I do believe that area is a lot more forested than the other parts in Idaho further south that I have spent most of my time in Idaho in.