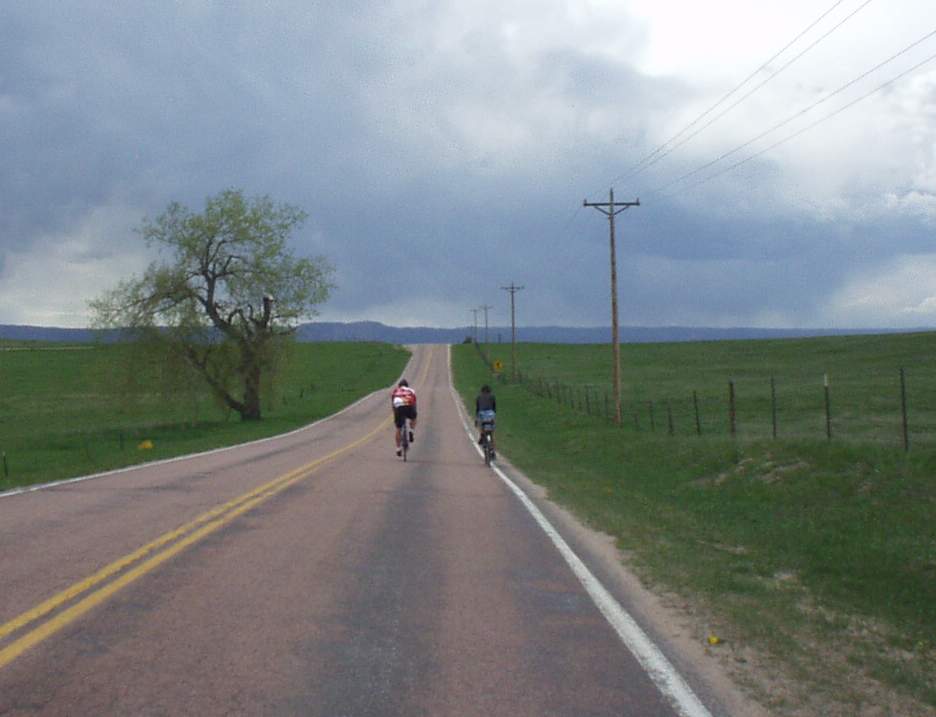 I guess I am still not a morning person. This would explain why that, I pulled into the Littleton Park & Ride with just 10 minutes to spare before the 5:00 start, and while I was putting on Canny‘s front wheel, everyone else had already rolled out of the parking lot on their bikes. “Wait for me!”

It would also explain why—just like last Saturday in the Quicksilver 50 Mile Run—my body was comatose, yawning as if I was under the influence of an Ambien sedative. Having slept only 3.5 hours each of the last two nights also did not help matters. Come to think of it, I probably wasn’t fully recovered from running the ultra last weekend either.

Yet, I fully enjoyed the Colorado scenery (green green everywhere right now) while wending through the rolling hills at a snoring pace as one of the last five randonneurs on the course for much of the morning, although there was one downside to this: I was getting so distracted by the vistas that I began missing turns.

The most egregious navigational error was in the Black Forest region at approximately 7,500 feet. Actually, I thought I was paying attention but I couldn’t find a road called “Sweet”. Not helping matters was the route sheet I was following was not entirely accurately, with several distances off by a quarter, half, or even a full mile. In any case, I was lost.

Out came the lifeline (the cell phone) to call my friend Nick, who was home and was able to do a Google Maps search to get me back on track. This was the second time I’ve had to do this in my life while participating in a ride, and there will be more times I’m sure. In any case, thanks Nick!

Getting lost a few more times kept me well arrears of the majority of the riders, so in this solitary state I commenced talking to my bike in Spanish, something that is starting to become a habit.

The latter statement alluded to the gray skies in the distance; yet, deep down, I was not really that concerned. After all, I figured the storm sequence would be like that in Fort Collins, where 1) some dark, threatening storm clouds suddenly moves in during summer afternoons after being brilliantly sunny for most of the day, 2) suddenly, it rains for five seconds!, and 3) it is brilliantly sunny again. Ok, this description may be a slight exaggeration, but the point is it is no big deal; in fact, this sequence helps cool things down and keep temperatures nice well into dinner.

Mid-afternoon in the brevet, however, I started seeing something else: long, streaking thunderbolts spanning the entire height of the sky. Unfortunately, I had forgotten the Spanish word for lightning, but Canny, being made of highly conductive aluminum, probably did not need me to relay that message to her. At least the lightning seemed to be safely in the distance, and it still was not raining…

At least until we were north of the Black Forest, and there was water blanketing the road. For many miles! “Maybe I should have put the route sheet in a plastic bag,” I said to myself, noting that water was now being sprayed directly at it from the front tire as if a nozzle was attached to it. Something to remember for next time: mountain weather can be unpredictable.

With about 15 miles to go—and feeling amazingly fresh for having ridden 13 hours already, admittedly at a really casual pace—I decided to test my legs and put the hammer down while crouching in the handlebars. Unfortunately, this didn’t last long as I started having navigational issues again, trying to make out what the route sheet was trying to convey (“Heron viewing intention? Oh, intersection!”) and got particularly confused on the bicycle greenway just a couple of miles from the finish.

But by 7:09 p.m., Canny and I had made it. Overall, it was a beautiful, laid-back-kind of day, with splendid scenery, little traffic, and few worries (aside from getting lost now and then). It was a pleasant reminder of how great it was to be back on the open road, and I even felt like my bike and I could have gone another 60 miles if necessary. That is, assuming that those extra miles didn’t take place in the early morning when I was sure to be yawning again.