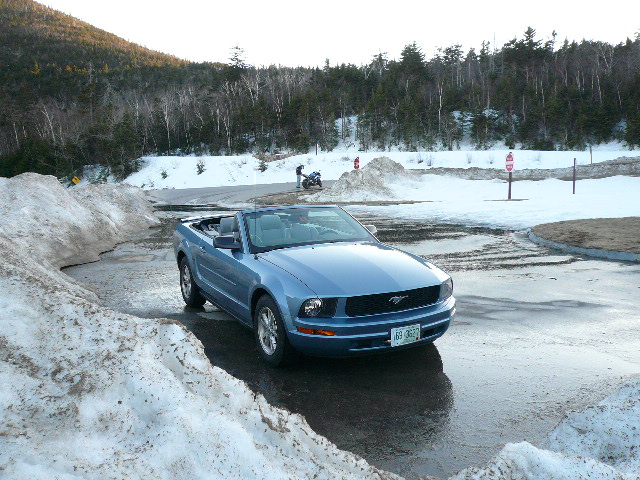 When the young woman at the Budget rental car agency at the Manchester International Airport handed me the keys to this 2008 Mustang (for the same cost as the economy car I had reserved!), I was absolutely ecstatic that this time I’d be driving something a lot more exciting than, say, the plain Jane Mitsubishi Lancer I had rented last. Nevertheless, it wasn’t exactly love at first sight.

Opening the Mustang’s super long door (guilty of car-ding violence all across America, I’m sure) and sliding in, I couldn’t help feel a little disoriented. First of all, the car was massive compared to anything I have owned or driven lately. It didn’t help that the bulging hood and lack of protruding headlight “eyes” (that Ferdinand Porsche liked as they help the driver gauge where the front corners of the car are) made it impossible to tell just where was the front of the car, and that the tall tail seemed a football field away behind me.

Sitting inside, I was reminded of the last ‘Stang I drove (a brand new GT when I was shopping for cars back in 2000), in which the driver was perched up high like he was sitting in an SUV.

The convertible top in its raised position also creates the largest blind spots in any vehicle short of a panel van. Tapping my fingers on the dash and door surfaces revealed hard, low-quality plastics. Ditto for the round climate control knobs.

Out on the open road, however, my sentiments began to change.

With the turn of the key, the engine roared to life. Wow, this was a V6? It sounded fantastic! Kudos to the Ford engineers who not only tuned the exhaust to make this 4.0-liter engine sound a lot like a V8, but for having the car instigate a reverential throttle blip whenever the key is first turned.

The high seat position was easily remedied by using the power seat controls which allowed seat height, fore-aft, and inclination adjustment. And the blind spots of the top—well, that was easily solved by putting the top down.

As long as I am critiquing this car, though, I might as well list the “things that can be improved.”

First, the back seat is a joke. I haven’t decided what rear seat is more useless—the one in the ‘Stang or that of my former Porsche 944 Turbo.

Then there is the issue of gas mileage. I wouldn’t say the gas mileage of the ‘Stang was disappointing (it still was better than my MG‘s despite having over twice the horsepower), but compare:

So the Boxster gets a lot better gas mileage despite being quicker and more powerful, and the Corvette gets about the same despite having almost twice the power!

One good thing about the V6 Mustang is that it uses regular-octane fuel. Also, its 6-cylinder engine apparently gets better EPA highway mileage than my Z3 did (26 mpg vs. 25) despite having 31 more horsepower and equal 0-60 acceleration times. (For the record, though, it seemed like I was getting 28 mpg in the Z3 on long trips, whereas I was getting 27 in the ‘Stang.)

Saving the best for last, there was a lot to love about the ‘Stang.

First and foremost is the style. It seemed to meld all the best attributes from the classic Mustangs (e.g., rear chrome “gas cap” and side scoops—even though both are fake in the 2008 version—and sharknose.

The style isn’t limited to the outside. The interior uses some hard, low-grade plastics to keep costs down, but overall the classic twin-cockpit and covered-cowl layout looks great especially with the round vents with chrome bezels, the manly shifter (an automatic in the rental car), and what has to be the world’s best-looking airbag-containing steering wheel:

It not only looks good with the metal-skinned surfaces, but feels wonderful with very supple leather. (The seats were covered with some of the nicest leather I’ve felt in a car short of a Lexus, too.) And despite housing an airbag, the center hub managed to be small and unobtrusive. (Morgan can really learn from Ford here.)

The Shaker 500 stereo system in this car was the best I’ve ever heard—and felt—as it can put out nearly 500 Watts of sound. It has these massive 10-inch woofers in the doors:

Driving-wise, the car moves with authority, even with the base V6 engine. In fact, after driving this car, the V8 just seems like a waste to me. The V6 already puts out 210 hp (more than the Mustang GT of the 1980s) and can go from 0-60 in 6.9 seconds, and that seems plenty fast already.

The 5-speed automatic transmission was the smoothest of any car I’ve driven. These include Mercedeses! A big surprise considering this is supposed to be a sporty car, not a luxury car.

The ride, on the other hand, seemed to be as harsh as a Porsche 944 Turbo. I guess that’s partly due to the live axle in back. There were times when I’d hit a bump and it seemed like the rear end was actually hopping off the road!

Steering feedback was reasonable, and the turning was fairly quick for a car this size. It was refreshing to have rear-wheel drive in a rental car, allowing for throttle steering and also surprisingly small turning radii when doing U-turns.

The windshield provides very good wind buffeting with the top down, and as typical with American cars, the heater is top-rate. With the windows rolled up and the heat on high, one can stay toasty even with the top down on a chilly New England night.

Hands down, this was the nicest rental car I’ve ever driven. I think I’m even putting it on my list of potential future cars to own—but with a stick, of course.