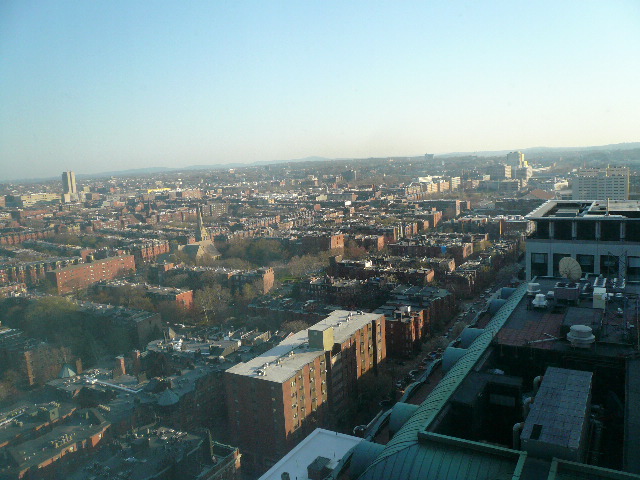 It was time to say goodbye to the wonderful ocean blue Mustang convertible that, yes, I could not help but keep praising the last few days. (Thank you, Budget Rental Cars, for lending me this vehicle for just $15/day!) This morning was my final drive with this vehicle—a car that reminds me partly of my former Atlantic metallic blue Z3 and also of the new KITT—going from Portland, Maine to Manchester, New Hampshire. I dropped off the ‘vert at the Manchester Airport and then took a free shuttle down to Boston.

Which is where I am now and will be for the next two days. I am already (after being here for only six or so hours) feeling somewhat overwhelmed by all the cars (worse traffic than San Francisco!), crowds, noise, and outrageous prices (e.g., $40 parking and $4.59/gallon for diesel near Fenway Park. Fortunately, I did not drive!). But it hasn’t been a bad day—even if I do already miss Maine, New Hampshire, and of course, the ‘Stang.

First of all, I got “stuck” sitting on the shuttle next to a cute triathlete named Michelle from Austin, TX, who came to cheer on her dad in Monday’s Boston Marathon. She will be racing in Ironman Coeur d’Alene and Arizona—which, coincidentally, are the two “official” triathlons held by the World Triathlon Association I’ve done—so we had a lot to talk about. Oh, and did I mention she was cute? So even though the shuttle ride was about 25% longer than it should have been because of the stop-and-go Boston freeway traffic, the ride was not so bad.

Then, I met up with Danny and Eddie at the Hynes Convention Center for the Boston Marathon Expo. This expo was huge! We couldn’t even hit all these booths before it closed—probably a good thing, especially for Eddie, who seemed to be using event to replenish his running wardrobe for the next couple years. He’d later joke that I was supposed to RESTRAIN him from buying anything, but hanging around him had the opposite effect—I actually bought something, a blue-and-black Boston Marathon running cap for $20. It’s overpriced in my opinion, but very good-looking—and far less expensive than what the official Boston Marathon jackets were fetching. (I think I’d rather use that $90 for a well-armored motorcycle jacket—or even a few more days with a Mustang Convertible in the future, thank you very much.)

Then we went out to dinner—but not before stopping by Fenway Park. Prior to today—being not a baseball fan—I didn’t even know that baseball season had already begun. Boo-hiss. Anyhow, we got to the park just in time for the national anthem being sung while Eddie got his picture taken giving a thumbs down roughly between the Fenway Park sign and a black, idling Bentley.

Finally, we had clam chowder and pizza at Castanero’s (something like that), which was very tasty. Much more carbs than I’m used to, and my heart is now racing as a result of that, but maybe it will help me sleep well tonight? Hopefully so because we are waking up really early tomorrow to watch the Women’s Olympic Marathon Trials in the streets of Baahston!

It's nosy of me and years too late, but having grown up in eastern Massachusetts, I absolutely cannot keep quiet about this: If we pronounced it "Baahston", it would be spelled Barston! It is properly pronounced "Bawstin", please! ↩ Reply