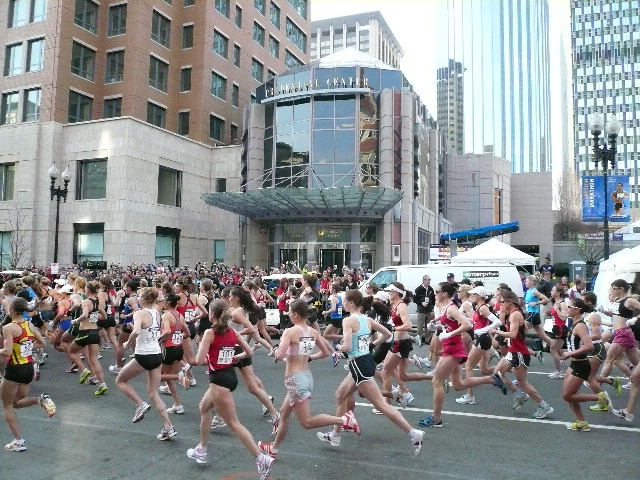 One of the motivations for running in the Boston Marathon this year was the Women’s Olympic Marathon Trials the day before. So I woke up early on Sunday morning to meet up with Eddie on Boylston Street, where the Olympic Trials shared the same finish line as the Boston Marathon.

The crowds were already amassing at 8:00 a.m., but we were still able to see the women at various parts of the looping course—particularly along Boylston and Commonwealth at areas where it was possible for spectators to shortcut the course. When the racers were over on the Cambridge side of the St. Charles River, we could also watch a huge flat-panel TV screen mounted outside the Hynes Convention Center. Here, Eddie grabbed some chairs giving us front row seats, which also were handy to stand on to peer over the crowds when the women came around again.

The race was an exciting one, with Oakland, CA’s Magdalena Lewy Boulet off the front from almost the very beginning and building up a lead of almost two minutes. After the halfway point, Deena Kastor decided enough was enough and broke away from the main pack, eventually reeling Lewy Boulet in after Mile 23 and finishing in a victorious 2:29:35.

Something like 133 women were here—all of whom who had qualified by running marathons of 2 hours and 47 minutes. Amazingly, California and Colorado swept the top five spots, with the top three going to Beijing and the next two being alternates. I came away from the race inspired, determined to put in a good effort at the Boston Marathon the next day.