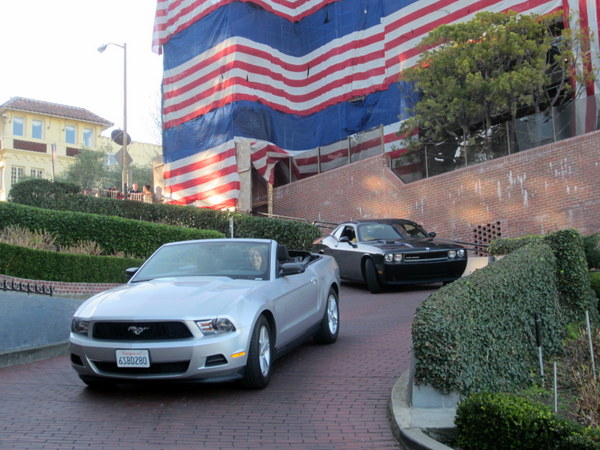 Note: Despite first writing this post in 2006, it is still current as I update it a couple times a year.

Out here in Fort Collins—where it has been perpetually sunny ever since late October—owning a top-down sports car has its rewards. In addition to being basked with ample UV radiation to ensure an adequate production of Vitamin D during the day and being able to see the stars piercing the night’s sky with their brilliant lights, the roadster driver can transport a surprising number of tall, slender objects.

No, I’m not just talking about long-legged beauties like Tyra Banks or Nicole Kidman. (They are welcome to pick me up in their limos if they’d rather.) Instead, here’s a partial list of items I’ve taken home in the Alfa: a ladder, a 7′-long 45-pound barbell, several ottomans, and a weight bench.

There comes a time, however, when a more conventional vehicle is needed to transport bulkier items. Today was one of those days due to purchasing a used coffee table set and a futon frame. These are items generally too large for a two-seat convertible but not large enough to warrant a mammoth gas-guzzling, hard-to-drive moving truck. Enter the rental car.

I motored on down to the friendly Budget rental car station, where I had a compact car reserved for me. I was prepared to make a plea for one of my favorite all-time rental cars—the Ford Focus ZX5 hatchback—when I spotted a deep purple Chrysler PT Cruiser parked just in front of the rental car office. “Hmmm, I hope I get one of those,” I thought.

Sure enough, I was offered a choice between the PT Cruiser and the Oprah-touted Pontiac G6. I’ll take the PT Cruiser, thank you. I had always loved the concept of a modern-day, hot-rod-styled breadwagon with compact car proportions, and Chrysler finally took the wraps off of the PT Cruiser around year 2000 or so. Its styling was somewhat controversial, but I had always liked the 1930ish radiator face, bold fender flairs and elegant, upward-lifting rear door. (Never mind that a friend of mine swears that its buttocks remind her too much of a hearse.) In any case, its aesthetics are far more distinctive than any other modern day hatchback that has careened down America’s roads, and to top it all off, the PT Cruiser was also designed to be delightfully utilitarian. This was, after all, brought to you by the folks who “invented” the minivan (please, no complaints by you VW Bus owners!)

Its interior is full of thoughtful touches and retro-coolness. The simple dash has body-colored panels in which round gauges and a passenger airbag are housed. The transmission (sadly, automatic) sports a 1960’s-inspired ball shifter topped by a chromed-plastic gear-selector push-button. The oversized steering wheel features a round hub (again housing an airbag) with four cylindrical spokes connecting to a large-diameter rim. This wheel would look at home aboard a steamship or hot rod if only it were made out of wood and metal instead of hard, un-leather-like-feeling plastic.

It’s the cargo-hauling features that I really appreciated on this day. First off, like all hatchbacks, the split rear seat folds down flat. In addition, these seats can be lifted up and forward for a lower, but shorter, cargo area. I think I have read that the rear seats can even be removed from the vehicle to completely turn the car into a mini breadvan, but I did not attempt to do this.

The front passenger seatback also folds flat, becoming an extension of the rear cargo area. The resulting cargo “floor” looked flat enough to possibly even sleep on (if one were inclined to go camping in this vehicle). Speaking of sleep, this cavernous space was more than long enough to haul a partly disassembled futon frame and full-size futon. (“I wouldn’t have believed it if I didn’t see it,” the futon’s seller stated.)

Perhaps just as remarkable is the rear parcel shelf behind the rear seat. In its default configuration, it serves as a cover to obscure the cargo bay from prying eyes. It can be lowered to a middle or bottom position to serve as a shelf. Or can be inverted to stick out of the cargo bay (with the rear hatch open) to serve as a shelf for tailgating parties after, say, a football game. It can also be removed entirely.

As a driving vehicle, the PT Cruiser is more ho-hum: the base four-banger is fairly anemic, but at least it achieves ok fuel economy, especially for a car with a cargo capacity rivaling small SUVs. It seemed to achieve about 26 mpg on the highway, though keep in mind I was driving 75-80 mph almost the entire way on Interstate 25 which has 75 mph speed limit (so other drivers were still passing me.)

Vehicle dynamics, while not bad, are nothing to write home about—it is about as good, but no more, as any Hyundai, or Chevrolet compact, or Dodge Neon as far as I could tell. For road feel and cornering, the rally-inspired Ford Focus takes top honors in this rental car genre, at least of the cars I have driven. All in all, though, the PT Cruiser has a lot going for it with its style and practicality. I may keep this in mind if—or when—I am ever in the market for a front-wheel-drive vehicle, for days to play in the snow.

[Note: the next two paragraphs was written in February 2006, so it is very outdated.]

Actually, my favorite as-of-2006 rental car award goes to a vehicle that won’t garner any styling or performance accolades, but goes to one that almost wins it by default: by virtue of having a manual transmission, hand-cranked sunroof, and achieving approximately 50 mpg on the highway from its 1.2-liter 4-cylinder gasoline engine. Never mind that this car was right-hand drive, being rented in England. I drove it about 1000 miles, only having a brush or two with curbs and heading down lanes in the wrong direction only once or twice. (There also was an episode where I had to check the owner’s manual to figure out how to put the car in reverse, as it had a funky lock-out feature on the shifter that had to be lifted up in order to engage the reverse gear.) It was a Vauxhall Corsa, manufactured by GM of Europe.

In the U.S., however, possibly tied as a favorite with the PT Cruiser, is the Ford Focus. I’m not a fan of the ZX4 4-door sedan’s styling, but the Euro-inspired aesthetics of the 3-door ZX3 and 5-door ZX4 hatchbacks is a knockout. I first spotted the ZX4 in England years before it was introduced to the U.S., so admittedly some of my delight at the angular styling comes from an imbedded association with memories of all the other great little European cars over there. The Focus also gets quite a bit better gas mileage than the PT Cruiser and feels more spirited, both in acceleration, road feel, and turning prowess.

Below is a list ranking the rental cars I have driven. Although I first wrote this article in February 2006, I will keep this list up-to-date as I drive more rentals.

Of the moving trucks I have rented, I have only rented two. One was a U-Haul Ford that, thankfully, I only had to drive six or seven miles as it was downright frightening. The other was a Ryder Isuzu that I drove 135 miles (to go to and from Denver to pick up a used leather sofa set), which was much better. Both were diesels, the latter achieving 12 mpg or so. I try to avoid renting moving trucks as much as possible as they are extremely cumbersome and expensive.