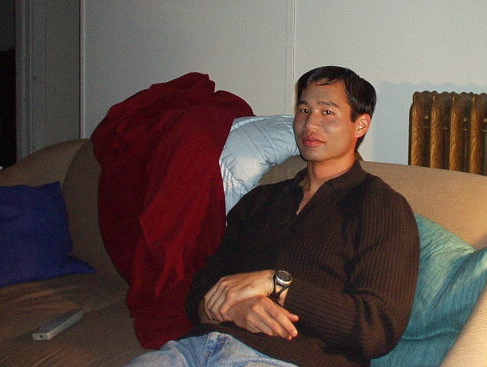 Has there a time when you have visited a loved one and you got the feeling that you brought a little bit of bad luck along with you?

In my case, I had been visiting Carolyn in Montclair, New Jersey, for just a couple of hours when things started to go wrong.

First, we were lounging on the couch as I was trying to show her some holiday photos on my iBook. One particular curiosity I was trying to show her was my dad, who was wearing a bright red, snowflake patterned Christmas shirt that he was extremely proud of. (So proud that he insisted that he was going to buy me one, but I kindly declined the offer.) Now, I am not sure if the shirt’s exceedingly loud and vibrant colors had anything to do with it, but then all of a sudden my iBook’s LCD display started flickering and froze up, indicating that the laptop had just undergone the dreaded G3 iBook video-chip-on-logic-board solder failure. (The otherwise delightful computer ultimately met its premature and utter death four weeks later.)

So the rest of the weekend we were entirely reliant on Carolyn’s computer to reach out to the cyber-world. Except, oddly enough, the cable Internet service unexpectedly went out. For two days! Give us credit, however, for not succumbing to Internet addiction withdrawal.

Ill-routed electrons were not the only issues from that first day. Shortly after the iBook contracted its first maladies, we heard a soft creak. Then a crack. Then what could have been a snapping of some twigs, except the noise was right under us. The couch!

Apparently, by merely sitting on it, I broke the sofa.

Now, before you think this is something quite unusual, let me assure you that I have several times seen chairs breaking right before my eyes. Never mind that all of these chairs were broken by a guy named Mr. Ubaldo. Mr. Ubaldo was a roaming piano teacher who would come over to our house to teach piano lessons when I was a kid. Actually, I use the word “teach” quite liberally here. More often, he would be doing something else—for example, working on his taxes—while I was hunting and pecking my way through the keyboard. That is, when he was not napping. I believe that he was doing the latter at least one of the times a chair collapsed from right under him.

Before you get suspicious, NO, my brothers and I did NOT sabotoge him! (I seem to remember that one or more of us—I will plead the 5th Amendment before providing names—may have fired a water pistol at him from an upstairs window as he was walking away from the house to his car, but furniture-rigging was beyond the scope of our tormenting.) That is not to say that we didn’t find humor in the situation; indeed, we got quite a few laughs out of it:

“Mom, Dad, can you believe what Mr. U-Bald-O did today? He was just sitting on the chair and it completely collapsed under him! HA HA!”

“NO FUNNY,” my dad would scold us. Then my mom, matter-of-factly: “He could have sued us!”

My brothers and I, ignoring such warnings: “Haha, the chair couldn’t even support his weight!”

Anyhow, here I was, in Carolyn’s living room, and it was not a tiny chair that couldn’t support my weight, but an entire sofa. (Before you ask, “what happened? Has Felix joined the ranks of the morbidly obese? I thought he was an over-exercising maniac,” let me assure you, if anything, I have lost weight—sadly, some upper body mass.)

What was particularly troublesome was this sofa was supposed to be my bed for the next few nights. (Fortunately, sweetie Carolyn had a Plan B for this: an inflatable—and rather comfortable—air mattress.)

Amid the chaos inside, it was perhaps best to go outdoors. This is where again I seemed to have brought some bad luck with me. Carolyn assures me that the days before I came, the weather was sunny, bright, and 50-60 degrees. The day after I arrived it was overcast, dark, with a high temperature of 31. May I also mention that there was quite a bit of new snow. Now, nothing like some of the Big Apple’s biggest snowstorms, but enough to warrant busting out the thermal underwear.

Where did we go? Usually the movies, where it was nice and warm.

We had a number of them on our to-see list. Movie #1 was Brokeback Mountain (a.k.a. “the gay cowboy movie”). Movie #2 was Caché, a French thriller. #3 was Munich, a vengeful, fictional film which recalled the violent—and tragic—1972 Munich Olympics.

Ultimately, we agreed that the gay cowboy movie was the best of the three, despite being somewhat melancholy. (I think Carolyn even shed a tear or two.) It was compelling and its scenery—which I would have sworn looked just like Colorado—was absolutely gorgeous. Caché was good, too, except it was 1) quite freaky and 2) we had no idea what had gone on once it ended. Munich—a three-hour, guns-and-ammo rampage-style flick—only seemed to reinforce the senselessness of murderous acts and reminded me to boycott violent movies going forward.

From the above you may suspect that we were just being couch potatoes during my visit. On the contrary, we went to New York City one of those days. Another day, we even started a marathon! A Lost marathon, that is.

Let me tell you about the TV show Lost for a minute. The basic plot of the program is that an airplane explodes and breaks apart in the air, and comes crashing into a mysterious deserted island. (Great show to see before, say, flying back to Colorado.) Miraculously, several dozen people survive, including a doctor, a pregnant woman, a former quadriplegic who since the crash has somehow regained the use of his legs and can even walk without a limp, and a “dangerous” fugitive who, may I add, is a total hottie. They then spend the next 30 or so episodes running around the island screaming, “the Monster is coming to get us! Aggghhhh!” It’s quite addicting stuff, actually.

Finally, on the last day I was there, I decided to give Carolyn a gift: to fix her couch. After all, (1) I am a mechanical engineer and (2) I broke it. We went down to the hardware store for supplies, and upon returning to her place I was armed with two wood screws, a bracket, and a lethal-looking awl. We inverted the couch and I solidified its broken wooden support with the screws and bracket. Upon closer inspection I also noticed that 90% of the screws holding the couch together were either loose or not even installed. Good thing Carolyn is not a carpenter. So my body mass index was not way off the charts after all, you see. I used my superior mechanical skills to turn those screws and voila, solid sofa.

I realize this has turned into something of a long story, so please excuse me now. Besides, I must go do my taxes and then take a nap.