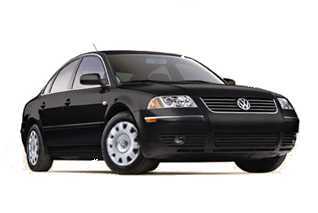 The mass populace still rely on bicycles or feet, but the roads of China are nevertheless filled with cars. Most of them are thoroughly modern, with a decidedly European flair.

Ubiquitous are Volkswagens, including Golfs, Santanas (known as the Fox in the U.S.), Polos, Boras (Jettas), and especially the new Passats. I’ve never seen so many Passats in my life! These vehicles appear the same as they do in Western countries but cost almost twice as much as they do in the U.S–e.g. US$40k for a Passat vs. $20k–which make them not the people’s car but rather vehicles for wealthy businessmen.

Audis are also abundant, especially the 100s based on a mid-80s 5000 and the new A6’s. Another luxury car I’ve seen more of in China than the U.S. are Buick Regals, which purportedly go for US$50k.

Many of the taxis and “commoner’s” cars include those made by French-maker Citroën. There are some Hondas but they seem to mainly include the U.S. style Accord.

Notably absent are SUVs, with the exception of a few Jeep Cherokees and Mitsubishi Monteros. I consider this a good thing. However, much less prevalent than even SUVs are 2-doors and sports cars (not to even mention convertibles!) This is a shame since in many parts of China there is warm weather for top-down driving many months of the year. In fact the only 2-door car I saw was a single Porsche 968 parked in front of a Mercedes dealership.

Although, check this out–a billboard advertisement for an MGF in Chongqing! Too bad I never saw an MG on the streets. But at least they must sell them somewhere in China, unlike in the U.S.