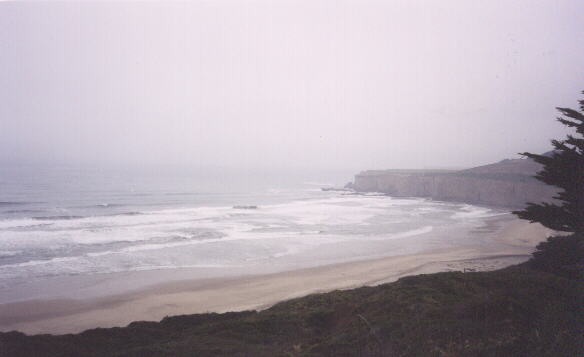 This 107-miler is actually fairly flat until Mile 45 when you go up Old La Honda Rd. Then there is another climb going up Tunitas Creek Rd., but compared to some other self-supported centuries like the Mt. Hamilton 100, this is quite a reprieve from climbing!

The company I work for had Friday off for one of those Christian holidays. Oddly, it seemed like everybody else had to work that day, except for my friend Mike, who just so happened bought a new Trek 2000 road bike just a couple days prior, and just about a month after moving down to Menlo Park from SF! I offered to show him a nice cycling route very near where he lives, and he accepted!

So at 8:50 I rode off from my home in Fremont, over the Dumbarton Bridge, and through Menlo Park. Off of Willow Rd. I had one of the closest calls with a car in my life. A woman in a Jeep Grand Cherokee was driving right alongside of me, not much faster at all, and approaching an intersection started to slowly veer to me. She didn’t turn on her turn signal but she just kept coming closer, and closer, and closer. Unfortunately just moments before I had reached for my water bottle which was in my left hand, preventing me from grabbing my left break. Instinctively, though, I yelled out “HEY… HEY!!!”… and then the Jeep just had brushed my arm. But after I yelled out the woman veered back into her lane, proceeded to drive straight instead of making a right turn, whereas I turned right at the intersection which is where she evidently was initially trying to go. “Phew, that was close!” I thought.

Actually, I was feeling very calm about it until *after* it all happened, and even then I was just feeling more relief than anger or another emotion. So I just made a U-ie at the street I turned off on and went back onto Willow Rd. in my original direction. Surprisingly, the Jeep had pulled off to the side with the window rolled down. The woman (a rather attractive one, I should add) then smiled and said, “I’m so sorry about that! I was on the phone with my pediatrian. [another reason to ban cell phones while driving!] Thanks for yelling out though!” I returned the smile, said “no problem” and we went on our merry ways.

Through some heavy construction work in Menlo Park, I arrived at Mike’s shortly after 10:00. He showed me his shiny new bike and soon we were off on our way. “You sure picked a great time of year to start biking,” I told him. “It’s the most beautiful day of the year so far.” It really was!

We then proceeded up Sand Hill Rd. (the very first climb Mike had ever done on his new bike; he did great!), then through Woodside, and then up Cañada Rd. to the Filoli Gardens, which I’ve never been to, or even knew about (weird considering how many times I’ve cycled by it during my Stanford days). $10 for entrance… definitely one place I’d have to take a tour through when I’m not in cycling clothes.

We then went down to the Pulgas Water Temple just shortly down Cañada. Usually one can go inside the gardens, use a restroom, and visit the Water Temple a little ways in… but not today. There was a sign posted saying it had just closed a week ago and won’t reopen until 2004(!) Darn, missed it by just a week. I thought back when was the last time I had been there. It was one night in August 1999, when my then-gf Carolyn came down and we drove up there in Portia. How time has changed. And it was weird to think that the soonest I could possibly be in there again is another 2 years, making it 5 years in between.

Anyway we turned around and proceeded down Edgewood Rd. It is one of the best descents in the Bay Area that I know of because (1) it is long, (2) it is steep, (3) it is wide, (4) it is smooth, and (5) it is non-technical. I wasn’t even trying to go fast especially since I knew this would be Mike’s first big descent on his bike (though he’s gone 55mph on skis before!), and yet we were easily sustaining 40mph+ speeds.

Going back up Alameda de las Pulgas, we returned to Mike’s house. 20 miles together, more than we had originally planned, but it was great!

The day wasn’t nearly over for me, as I was still determined to go to the beach. Up Old La Honda and down 84, around Pescadero it was overcast and a bit cooler than where it had been in Palo Alto. I even put on my leg tights and never took them off again. I stopped briefly at the San Gregorio General Store to look around, use their bathroom, and buy a couple of bananas. A couple of Porsche 968 owners were also there doing a little 2-man driving tour.

Then I stopped by the beach in which I had envisioned basking in the sun in the warm sand, but alas, that vision was never realized because it was entirely overcast and I was running out of time. My cell phone did start beeping then, and it was Sarah. “Hey, guess where I am… on the beach on my bike,” I said. It was then when I realized just how far I had come today!

The miles were definitely wearing on me, though, judging by how easily some riders were able to pass me going back up to La Honda via Tunitas Creek Rd. Beautiful road though, if a little rough. I descended down Kings Mountain, through Woodside, and through Stanford to snap some pictures.

By that time I was really hungry and would have stopped by the campus Jamba Juice, but didn’t have enough time as I was racing sunlight now!

Through Palo Alto, East Palo Alto, Newark, and then back into Fremont. Made it home by 7:15, meaning that I had to ride about 15 minutes in darkness without lights. No big deal. This would be the last time I would ride in Standard Time for a while though, as the shift to Daylight Saving time would occur the next week. Looking forward to riding more in extended daylight hours!