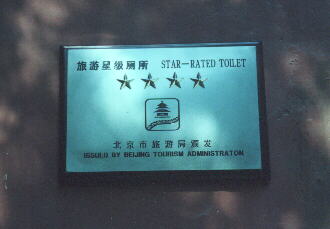 This is a list of some of the more unusual sightings from our China ’02 trip. It made the trip the all more interesting and, at times, funny!

On the second day in China, we went to the Ming Tombs, where Chinese emperors were buried. What seemed to pique the most interest of tourists there, however, was not the tombs, but rather… a restroom that was given a 4-star rating by the China Tourist Council.

My friend, Karen L., who coincidentally did a similar Ritz Tour with my former biking buddy Debby just a few weeks before I went, even wrote after I returned, “I should be working right now, but I just wanted to write I TOOK THE EXACT SAME PICTURE OF THE 4-STAR TOILET AT THE MING TOMBS”.

Dead Pigs in the Water

Each day on the Yangtze River Cruise (all 5 days), we spotted dead pigs in the water. The first one was actually only half a pig, which made us wonder where the other half went.

When we reported this to Sam, our most excellent tour guide, he just brushed this off, thinking it wasn’t a bigdeal at all. “You’re lucky not to be seeing other things,” he said, “like people floating in the water, due to floods.” Doh!

On the second day of the Yangtze River Cruise, I was taking a nice and peaceful nap to some relaxing jazz music in my cabin, whenall of a sudden, I hear a huge “thump” on the window.

Now, I am usually a really deep sleeper, and it would not have startled me, if I hadn’t looked up only to see a huge butterfly spanning the entire width of the (rather large) window! It was on there for about 30 seconds! Apparently, on deck was a Chinese kite-flying demonstration, in which a butterfly kite was being flown. It wasn’t doing so well with the high winds on the water, and of all the cabin windows it could have crashed into, it crashed into mine!

This one particularly made my dad get all excited (like overly so).

In Xian, where we would see the terra cotta soldiers, apparently the President of Greece, with body guards and all, was doing the same tour. This caused several delays for our tour group! I never saw the guy, but my dad claimed he did later that night when he went to a Chinese opera in Xian. (Martrese, Karen, and I had opted to go to a McDonalds and an Internet cafe instead to spare our ears…)

Thanks for this site. I have a new sister in law that arrived from China June 6th. I wish I could talk to her. I have been seaching for some info on line to help me understand her. She has been trying to learn English as well. ↩Reply