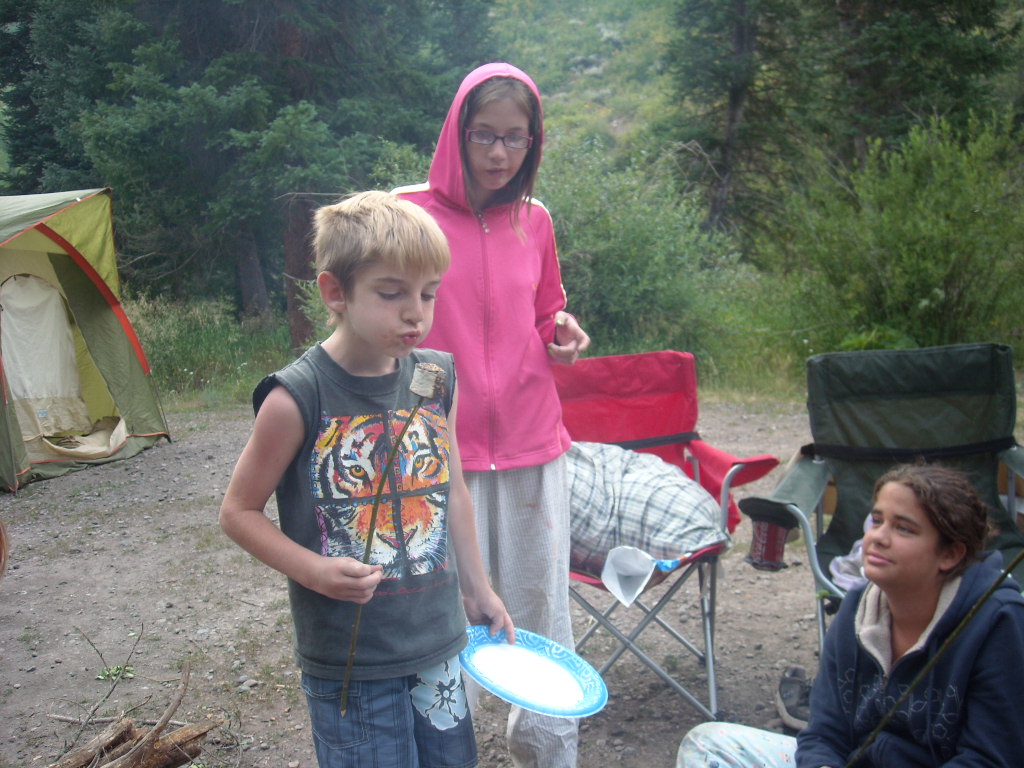 It may have just been a case of heightened expectations. It was also possible that the fish had breakfast, brunch, lunch, and a mid-afternoon snack already and were not simply hungry. In any case, it probably was Not a Good Idea for Tanya to tell me about her excellent angling skills or about all the fish she could “see” in the Curecanti Creek while we hiked on single-track 50 feet above. Because it made her all the more vulnerable to my claims that she was simply delusional.

“I don’t see any fish,” I’d say after she would stop abruptly in her tracks and shout “right there!” while pointing. I became further convinced she was loco when after an hour of fishing in the creek, we had not gotten a single bite. “I really think you are just imagining things,” I’d add after draping my arms around her shoulders to assure her that I thought she was all right despite soon needing to be checked into a funny farm.

It turned out that fishing was not the only thing that did not go as planned. For example, dinner.

Now, my pickiness as an eater ranks somewhere between that of an emaciated castaway on a deserted island and a laborer exhausted from a day of digging ditches. About as fancy as I’ve ever gotten during campsite food preparation was heating a pot of water with a solid-fuel stove and throwing some 25-cent ramen noodles into it (or “fast noodles” as my mom used to call them since they take about two minutes to cook). But Tanya had some other ideas. She was going to expand my repertoire of camping culinary craft.

“Forty-nine cent burritos are almost better than hot dogs as the ultimate campfire food,” she claimed. Accordingly, she brought two bags of frozen burritos, some of the bean-and-cheese variety and others with chicken or beef.

Unfortunately, my ramen-cooking skills didn’t translate so well into optimal burrito-roasting technique, and by the end of the night I was not exactly proclaiming (as Tanya had the last time she was roughing it) “they work great!” For one thing, spearing a frozen burrito with my pointy stick only resulted in breaking it into two halves. It seemed like the kids had similar trouble keeping burritos on their sticks as evidenced by the number of tortilla-wrapped “blocks” that soon lay beneath or at the same level as spark-emitting firewood.

Ultimately, I fashioned a fork-shaped roasting platform out of a branch and placed it a few inches above the open flame. Then, I plopped a bean-and-cheese burrito onto this and let it cook for 10 minutes. I was rather proud of my “invention” until I proclaimed the burrito (now very black on its underside) “done” and dug my teeth into it. Despite the bottom being positively charred and possibly carcinogenic, the innards were still about as cold as a bag of peas that was taken out of the freezer only five minutes ago.

“It’s amazing,” I observed, “how half of the burrito could be so burnt and yet the rest could still be frozen.” I then attempted to reheat the rest of the bean and tortilla mess on a Teflon-coated frying pan, but this only made the burnt fragments a little hotter to the touch and taste about as good as an ash-and-bean salad, or so I imagine.

By this point I think most of us lost our appetite for Mexican food as we moved on to hot dogs and gooey marshmallows. Except for Cody. Somehow he managed to relish the charred-and-frozen burritos, even remarking at one point as to “if only I had some bacon, then it would be perfect.” I almost busted a rib laughing after digesting his comment.

After our early dinner, we resumed doing one of Tanya’s favorite outdoor activities: brook fishing. Part of the motivation for this was—as I have already mentioned—neither of us caught a single fish earlier in the day even though Tanya assured me that she always catches some and rather easily too. Another bit of inspiration was provided by the Cheyenne and Mita who—while Tanya and I were off hiking together for three miles earlier in the afternoon—managed to catch five small fish in less than an hour.

So there must have been fish in the creek after all. Indeed, eventually even I saw fish in the water—whole schools of them—and it was absolutely mind boggling how so many would swim within inches of our worms but give them less attention than a bored kindergartner gives his teacher.

Oh well. At least it turned out Tanya was not delusional after all. And considering our lack of luck (or skill) in catching fish today, it was good she brought those frozen burritos.

Joking aside, Curecanti was a lovely place. Even though it was an August weekend, the remoteness of our primitive campsite that required 45-60 minutes of off-roading to get to (my PT Cruiser rental car with a modest 5.5″ of ground clearance did great) ensured tranquility away from crowds. Granite cliffs, reddish mesas and ponderosa pine guarded against the wind while creek water leisurely flowed past brush, stones and wildflowers. We did not encounter much wildlife but that just left us free to enjoy the heat of the campfire and the warmth and laughter of each other.

After the trip Tanya was already talking about how we’ll have to return again if only to prove that she can indeed fish. I’m actually already sure that she can, but I’m not quite as sold on the burrito idea. Next time I think I’ll be packing ramen instead.