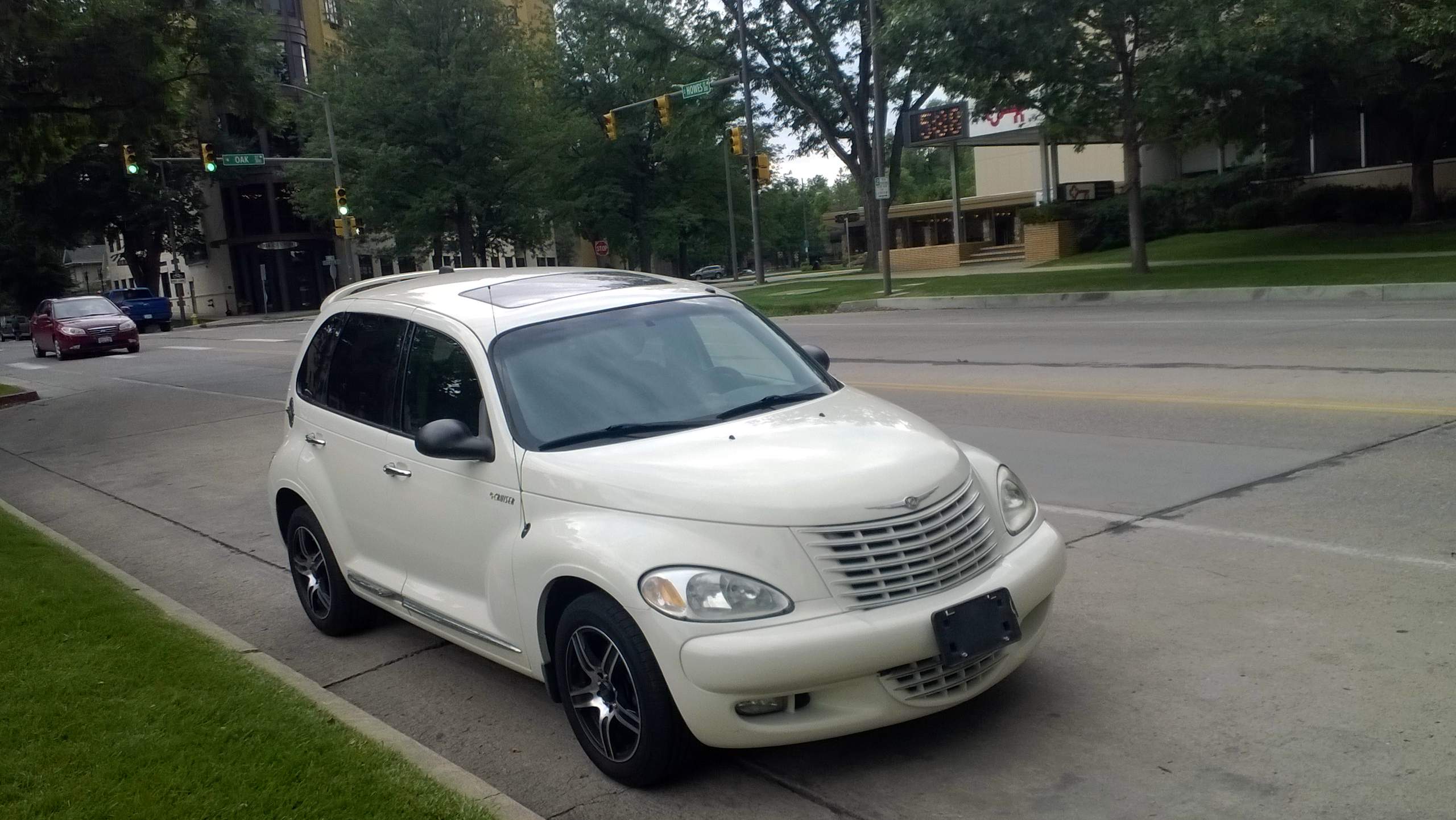 It’s been six years since I last owned two four-wheeled vehicles simultaneously. During that time when the Audi TT Roadster Quattro was insufficient, I merrily rented a car from the local Enterprise. Less maintenance, insurance, and headaches that way, I figured, plus it allowed me to drive a variety of different, new cars. For the most part, the “rental car as a second car” solution worked well.

But in anticipation of something of a life change—splitting my time between St. Louis and Fort Collins for perhaps 9 months or so—I decided having a second car was a good idea. I wanted something that was practical, reliable, and inexpensive, yet more exciting than a Maytag washing machine. The latter meant having loads of style and character.

That is how I ended up with the 2005 Chrysler PT Cruiser GT pictured here.

I actually was looking for one on Craigslist for quite a while. I knew I wanted the pre-Daimler-Chrysler version, as I much preferred its retro grill and adherence to designer Bryan Nesbitt’s original concept. My color preferences included those of the American or French flags, and the car had to have a sunroof. I could have gone either way with the transmission despite my penchant for manual gearshifts. The car also had to have less than 100,000 miles.

Finally, I saw an ad for this car that had only 68,000 miles, one owner, no accidents and basically every single option. It was the top of the line GT model. “Looks like a winner to me,” I thought.

It didn’t disappoint. The original owner of it, Phil, kept the car in meticulous condition and had regularly serviced the car with all receipts. When I inspected it I found nothing wrong with the exception of a slight vibration at idle, a common issue with PT Cruisers of this vintage. One day in the distant future it may need new motor mounts. For now, the car is just about perfect and belies its 10 years of age.

We negotiated a fair price that, thanks to the wonders of depreciation, amounted to about one-fifth of its 2005 brand new price of $25,215. Then, I took the new Bustang bus from Fort Collins to Denver to take delivery. (As my numb hands from the Trans Am Bike Race had not yet healed, I was thankful to have this option instead of biking over, which was the original plan.)

One remaining issue was what would be the PT Cruiser’s name? I quickly settled on Peter. So now there’s a Peter and Teeter (the Audi TT) in the Garage Mahal.

The color is “Cool Vanilla,” which was the color of the PT Cruiser’s concept car predecessor, the PT Pronto, as explained in this excellent video on the PT Cruiser history by Donut Media.

* indicates features none of my previous cars ever had

Bryan Nesbitt designed the PT Cruiser for Plymouth, but it became a Chrysler instead since Chrysler Corporation discontinued Plymouth. At first when the car came out I thought the front end looked a little, well, different, but have really grown to like it over the years. To me it looks both retro and distinctive.

I have always liked the fender flares and the chrome door handles, which give the car a substantial, strong appearance. The interior looks both stylish and playful with colored dash inserts and brightwork on the steering wheel and shifter. The rear three-quarter view is simply gorgeous.

The PT Cruiser can be best described as a love-it-or-hate it design. My dad, for example, falls in the latter camp. When I told him I bought a new car and he asked me what I got, I replied “you think it’s really ugly” and he knew exactly what car I was talking about.

What is indisputable is that the design is clearly reminiscent of a 1935 Plymouth sedan, as shown below.

Even though I have only owned bona fide sports cars in the past, I actually think the PT Cruiser GT is pretty fun to drive—especially with the windows down and moonroof fully open. With the transmission in Autostick mode, the spherical shifter knob is almost as delightful for shifting as a standard.

The turbocharged engine has nearly as much power (205 hp) as the Audi TT Roadster Quattro and my former Porsche 944 Turbo, and thus Peter’s reported 0-60 MPH acceleration time of 7.1 is close to those other cars’. But in contrast to the two German cars, Peter exhibits no perceptible turbo lag, so a lot of power is available at launch. It is pretty easy to make the front tires spin with this engine.

The car exhibits little body roll in corners. Turn-in, however, is slow and results in rather large turning radii. I have successfully made U-turns on some wide two-lane roads without having to back up, but the turning radius is definitely more like a truck’s than a little roadster’s.

The EPA estimated mileage on the original window sticker reads 19/26 MPG. In the real world, I have gotten over 27 MPG combined city/highway several times, but also 24 MPG running gas made of 10% ethanol on the highway. Premium unleaded is recommended.

In any case, I consider this mileage “pretty good” considering the car’s vintage and also that it can hold as much as many SUVs. For example, in a PT Cruiser I rented 9 years ago, I was able to carry a full-size futon and its frame.

My wife found us a car last year. She wanted a convertible and I wanted a PT Cruiser.

We found one in Newark, NJ 2005 Inferno Red convertible, one owner and

We only drove it 4,000 miles last year mostly on Sundays on day trips

I have gotten many offers so far I'm just not selling it!!

Good Luck with your PT!!

It's always great to hear from another PT Cruiser enthusiast. Congratulations on your PT Cruiser Convertible! As the car only had one owner and only 30,000 miles, I imagine it is like new!

I can see the convertible being something of collectible value nowadays. Happy motoring! ↩ Reply

I already found the exact

I plan to upgrade the radio, where do you get that 1 DIN "adapter"?

That's fantastic about getting a midnight blue GT with so low miles!

The previous owner installed the aftermarket radio and I'm not sure where he got the DIN adapter. Maybe try Crutchfield. Good luck! ↩ Reply