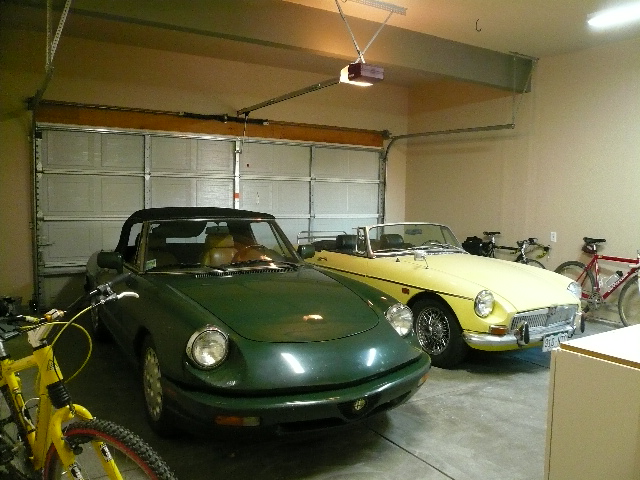 I’ve passed more time in the garage in the last couple of weeks than most people do in their bedrooms, but with good reason. The Garage Mahal has been resurrected! Well, if not in original form, than in spirit. Introducing the Garage Mahal 2.

When I moved into my new home two years ago, the garage was finished aside from a bunch of drywall seams needing to be taped, something that could be rectified in, oh, two hours. Or, at least, that is what my naive mind thought at the time. Needless to say, everything seems a whole lot easier in my mind than in actuality, and even my empirically proven formula of “take your best estimate and multiply by pi” for determining how much work would be required was way off.

This is ultimately what I did:

All in all, I’d say I spent at least 50 hours on this project—or about three times more time than the original Garage Mahal (which required no drywall work and already was covered with primer when I began work on it). I should have learned from my landscaping project and outsourced the bulk of the work to some college kids.

Anyhow, below are some photos showing the fruit of my labor. Actually, the garage is not entirely done, as I still need to hang artwork. But, that is easy (ha!) At least everything is clean and organized now.

While that should make resale of the house easier, an unfortunately result is that the Garage Mahal 2 looks a little less inspired than the original Garage Mahal, yes?

Ah, well. After I hang some artwork and automotive memorabilia, the new garage should approach the original in terms of sheer inspiration.

In the meantime, I’m looking forward to spending more time in the human quarters than the cars’, like a normal person!