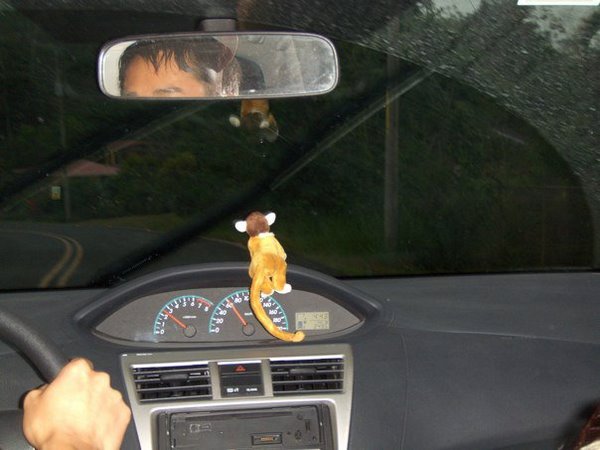 You might have guessed that after a couple of near put-me-in-the-hospital road incidents a few months ago in Guatemala—including almost being taken out by a chicken bus while riding a bicycle, and then falling off a motorbike on a washboarded country road—I would not be clamoring for a vehicular adventure in another Latin American country. But there I was behind the steering wheel of an anemic Toyota Yaris rental sedan whose high-strung motor would let out a primal scream every time the road angled towards the sky in Costa Rica, which was frequent.

“I know it seems like we are going really slow,” I said almost apologetically to Raquel and Tori at one point, “but the speed limit has been 40 or 50 kilometers per hour, and I’ve already been going 60.”

As it turned out, the Yaris’ 1.5-liter four-pot with the peak strength of a mere 106 caballos was Herculean enough for the task. So were the car’s scooter-narrow tires, five-speed manual transmission and econo-rate handling, which might be a little surprising considering we were on twisty mountain roads that yearn for a real sports car that has proper heel-toe pedal placement allowing for heel-and-toe downshifting. The speed limit on the mountain highway between Dominical on the Pacific coast and Cahuita on the Caribbean side never exceeded 80 kph (49 mph)—it usually was between 40-60 kph (25-37 mph)—and according to our friend Brad a few days ago, they are “vigorously enforced.” (Never mind that when Brad was driving a rented Hyundai minivan here, he was almost always driving double the speed limit while passing other vehicles with the regularity of Emerson Fittipaldi.) The autopista also featured only two lanes with a shoulder narrower than a cat’s, so if the speed limits didn’t slow you down, inevitably a banana-hauling truck or semi-trailer crawling along in first gear would.

This was a little unfortunate because the distance, it turned out, between Dominical and Cahuita was not trivial. It was 330 kilometers (205 miles) to be exact, and at 30 mph, this meant about seven hours of driving.

With a stop at a cafeteria and another to fill up with 608 colones/liter (US$4.66/gallon) regular fuel, the drive actually took just over eight hours.

Fortunately, we did not need extra time for finding our way. How could this be when my orienteering skills would certainly not win me any merit badges for even a toddler Boy Scouts troop? This is because with the rental car we paid extra for an external Garmin GPS unit.

This navigational device—in addition to keeping us pointed in the right direction—also featured a “virtual tour guide” who—upon passing a notable location—kept interrupting conversations and awakening sleeping passengers with a loud proclamation of how we were about to see the highest point in Costa Rica (were the fog not so dense) or some interesting tidbit about the history of the banana. The tour guide’s soliloquies were preceded by the thumping of tribal drums which continually put Tori and me in a Muppets-like head-bobbing frenzy.

“This GPS unit was well worth the extra cost,” Tori remarked at one point, although probably not because the tour guide’s drums made us want to dance.

Instead, it was because most roadways were entirely unmarked except for the occasional death-impending warnings of “ceda” (“yield”) or “despacio” (“slow,” as if 40 kph wasn’t slow enough already). In fact, for just getting out of San José (for travelers intrepid enough to rent a car from the airport and drive themselves to their intended destination), guidebooks routinely advise to “pay a taxi driver $5 or so to lead you out of the city.”

All in all, the drive to Cahuita was uneventful enough—at least until it became dark and I had to motor on Highway 36 along the Caribbean coast. This is when the roads seized to have any lines, a bridge did not have any guard rails on one side, and the highway seemed even more narrow than usual—an optical illusion amplified by the bright headlamps of semis careening towards me with little room to spare.

And despite the darkness, there was an amazing number of bicyclists with no lights or reflective gear riding on non-existent shoulders, and people walking three-abreast like they were taking a nighttime stroll in the park.

At least there were no crazy chicken bus drivers here like there were in Guatemala. So unlike in that Latin American country to the north, I would have no near call-an-ambulance incidents here.

Ha ha!! Love your descriptions of driving there... wish we had known about the "pay a taxi driver $5 or so to lead you out of the city"... We had our iPhones with us and Jim had downloaded "Gallileo" a GREAT mapping app that showed all the roads (you know the streets with no names) and showed us as a blue dot (our anemic Hyundai Tucson with street tires which in reality was pretty much just that - a blue dot). The mapping app worked GREAT! ↩ Reply