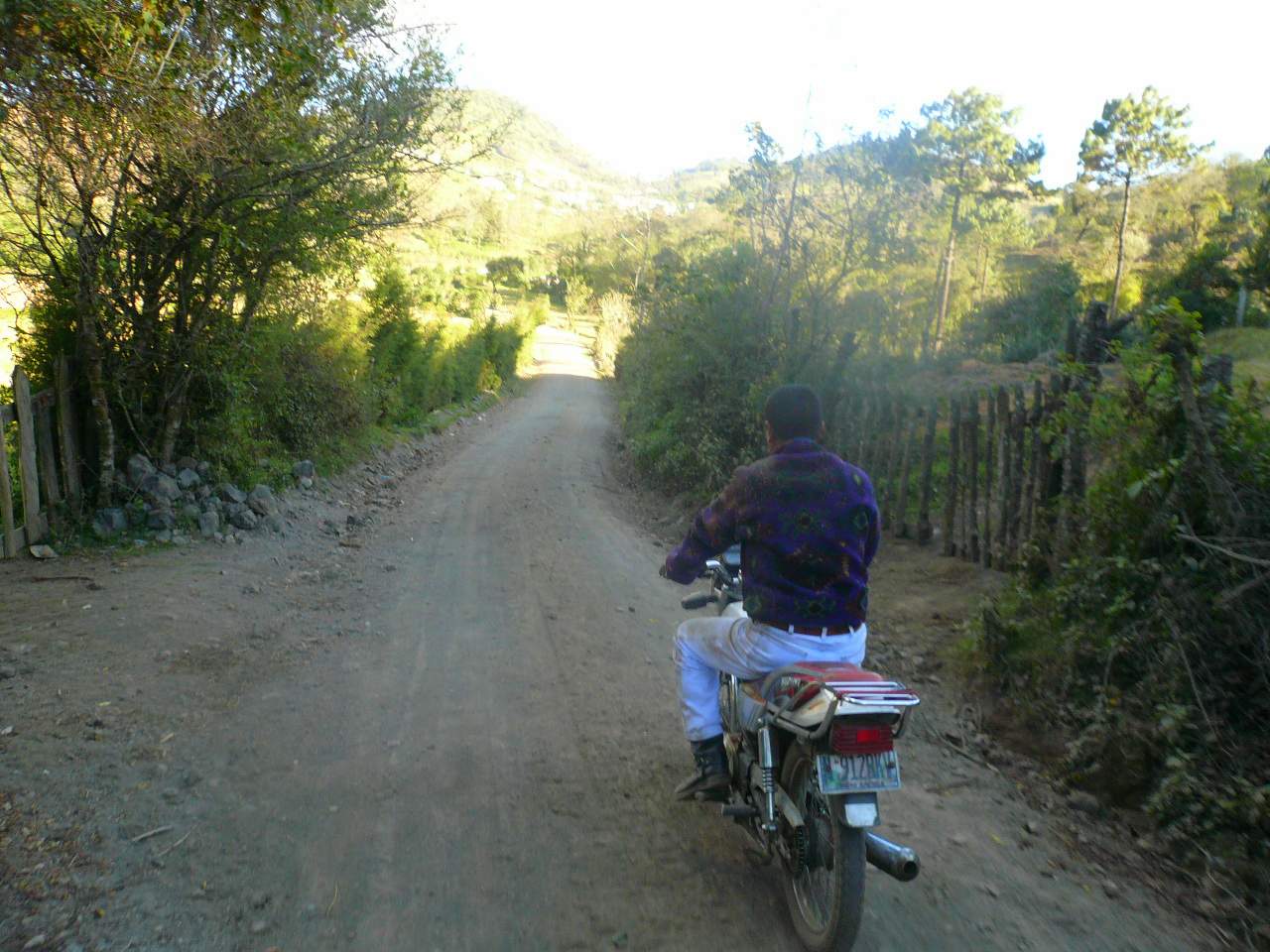 I was fixing a kid’s bike when–suddenly–one of the other volunteers yelled out that we were about to go visit one of our bicibombas (bicycle water pumps) in action. Excitedly, I bolted upstairs to grab my denim jacket and camera, but by the time I had come back downstairs no one was around except for Carlos. He laughed and said in Spanish, “They left!” and motioned me towards the back of a Suzuki motorbike that was built in the 1970s. Another two-wheeled adventure to augment my bicycle ride down to Chimaltenango the other day–cool.

A couple minutes later, Carlos and I were rolling along a rather rough country road. Over the squeal of the motorbike’s feeble two-stroke engine, Carlos yelled out that our destination was “allí” while wagging his index finger towards a mountaintop that seemed only a couple miles away.

As I clutched the chrome handrails of the Suzuki, the bike hopped along the washboarded road like a kangaroo while the decades-old suspension continually bottomed out. We passed a few people walking with animals–a horse, a cow–and mutually waved. Charming.

The ride was actually fairly drama-free until we got to a steep section of this narrow mountain road, and the two-stroke started coughing blue plumes of smoke intermittently between whining like a chainsaw motor. Go little engine, go! Our speed reduced to hiking pace and as Carlos applied more throttle, the engine kept sputtering. The bike barely crested the hill when the motor finally came back to life. Carlos and I laughed.

From there, we ambled onward along this winding dirt road, bordered by verdant farmland to our left and stunning views of an open valley in the shadow of volcanic turf to the right. I would have loved to have snapped photos of the vistas, but considering the jackhammer ride, decided it was best to continue grasping the motorbike’s chrome grab handle with both hands. Ten minutes, twenty minutes. I thought the farm we were going to was close? Yet, no complaints from me as I was actually enjoying the ride.

That was when the motorbike’s speed was reduced to a crawl again. Next thing I know Carlos had the handlebars cocked in an obtuse angle, and as I glanced down I saw that the front tire was inches deep in sand.

Uh-oh, the bike was toppling over!

I resisted the urge to put a leg (or worse, an arm and a hand out) to try to break the fall as I knew that doing so under the weight of this 250-pound machine would be futile, likely resulting in a broken wrist or ankle. Hence, the bike collapsed onto our left sides and Carlos and I were pinned underneath the machine. The motor was silent, and we lay there in the middle of the road like a deer that had just collided with an SUV.

Well, almost. After asking Carlos if he was ok, we both laughed and crawled on out from underneath the motorbike. Carlos assured me he was fine although he was limping a bit. He must have taken the brunt of the fall because I escaped with nary a scratch or bruise. The left half of my body was covered with dirt–something of a shame because I just took a shower in Antigua three days ago–but none of us were going to get any awards for cleanliness to begin with.

Add this to the list of the many ways to die in Guatemala, though.

We yanked up the bike and tried to start the engine. Amazingly, after a couple cranks the motor came to life. Kudos to Japanese engineering. At that point I said something in Spanish like, “I think I’ll walk or run instead,” but Carlos replied, “get on!” And so we motored away once again.

Thirty seconds later, we encountered the other volunteers in front of the truck that had (presumably less eventfully) taken them to the farm we were going to. Darn it, we almost had made it without taking a spill! As the others saw how our left sides were covered in tierra they wondered aloud if we had some sort of accident, to which I replied in the affirmative. Much laughter around.

From there, we got a demonstration of this bicibomba (bicycle water pump). Here’s Bruce pedaling it in the mountains outside of San Andrés Itzapa:

We then visited another one just up the road (which, thankfully, was walking distance). Its owner explained it had a mechanical problem. We disassembled the bottom bracket and saw that its bearings were shot. Carlos would bring back parts for it the following day. Afterward, we checked out a gas-powered generator that the same owners were having issues with. Its idle was a little rough. I removed its spark plug, another person cleaned its electrode, and upon reinstallation–voilá! Worked a bit better.

It was time to return to Maya Pedal, and as much as I “enjoyed” the motorbike ride, I opted to hop in the bed of the pickup truck instead. It would be a four-wheeled adventure that was a bit less eventful than the two-wheeled one.