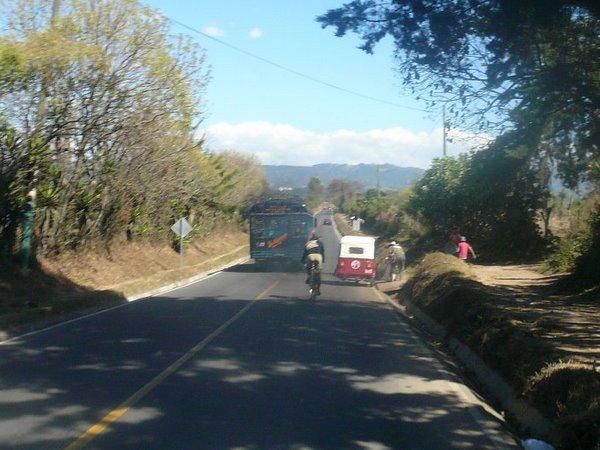 When I first heard that the other volunteers had ridden cobbled-together bicycles from Maya Pedal in San Andrés Itzapa to Antigua (about 14 miles away) together, I was quite impressed. Then I heard that Julian had biked over on an 80’s KMart special to Antigua well after dark (7:00 p.m.) to visit a new girlfriend using a headlight that had less luminating power than a candle, and I was absolutely astonished. So when Bruce said that he was going to bike over to Chimaltenango (eight miles away) on New Year’s Eve, I volunteered to join him. I decided it was a good opportunity to see how riding on two wheels in Guatemala compared to, say, China or Vietnam.

Not muy bien, it turned out.

Admittedly, part of the equation were the bikes we had to ride. We borrowed a couple of bicycles which—despite being Maya Pedal’s crema de la cosecha—were as much Frankenstein as mountain bikes. Bruce was riding a mid-1980’s John Tomac edition Mongoose which had a nice frame out of Tange Prestige tubing, but using a fork whose threaded steerer tube was about two inches too long. Bruce had gotten this fork to work by using five locknuts that essentially functioned as spacers.

The bike I was riding was a newer (like early 90’s) Fuji hybrid sporting 700c wheels. While it looked fairly nice and even had a suspension seatpost, it too was cobbled together from Parts That Don’t Exactly Match. E.g., the fork was made for 26″ wheels, not 700c. The result was an steeper effective head tube angle, which manifested in super-quick handling that wanted to dive into an invisible corner any time I tried to clear my lungs of air pollution.

Nevertheless, we fearlessly headed out of town down some cobblestoned roads that might have been suitable for the Paris-Roubaix race, were there not so many potholes. Or errant vehicles, for that matter. During the first minute we were out the door of Maya Pedal it looked like Bruce was headed straight on into a truck, but with his excellent mountain bike handling skills (he once was a semi-pro who won several races) he didn’t even flinch.

The cobblestones, however, revealed a sad fact about my bike: the suspension seatpost was basura (garbage). It bottomed out all the time and it made the rear end of the bike seem particularly squirrelly. I detected some unwanted lateral movement, too.

Still descending, we enjoyed the views of the lush farmland in front of distant volcanoes which were only partially obscured by the dense smog that blankets Guatemala. Now and then, a chicken bus would pass by and enshroud us in a cloud of thick diesel smoke, much to the dismay of my lungs.

Within a few miles of Chimaltenango, we were being passed with enough regularity on the shoulderless roads that both Bruce and I resorted to riding in the gutter. When we made it to the city limits room for pedaling seemed even more constricted, and when we found a suitable ferretería (hardware store) that could make keys, we resorted to pushing our bikes onto the narrow curbs instead.

Outside the ferretería, we discovered an unsettling fact: one of the rear spokes of my bike was broken. No wonder the rear felt so squirrelly. We surmised the spoke breakage probably occurred on the cobblestones of Itzapa, meaning that I was riding with a wobbly wheel almost the entire ride.

After getting the keys and the ice cream, we rode back. Not far out of Chimaltenango, I had my most unnerving incident of the ride. I even yelled out an expletive as a long chicken bus roared past on my left with less than a foot of space to spare. If I wanted to, I probably could have knocked the bus with my elbow. As to my right was a six-inch dropoff, all I could do was maintain my line. After that, I resorted to riding as far right as possible, even if that meant off-road sometimes.

On the uphill to Itzapa we released my rear brake which stopped the wobbly rear wheel from rubbing against the brake pads, but of course took away one of my stopping options. It was only when I got to Maya Pedal did I release a sigh of release that we had gotten back safely—all for a bunch of keys.

So how did it compare to China or Vietnam? Traffic density in the Asian countries was a lot worse. But in China and Vietnam, a person is usually riding in a sea of other cyclists, a critical mass of sorts that insulated himself somewhat from the dangers of the more massive, motorized vehicles.

One thing I’d say about Guatemala, however, is that the vehicles tend to be in even worse condition than those in the Orient. About 90% of cars and trucks I saw between Itzapa and Chimaltenango would likely register a giant FAIL on smog control test machines in the United States. Each one belched out more nasty fumes than a pack-a-day chain smoker.

Nevertheless, Bruce is planning on doing a cycling tour in Guatemala and southbound through Central America after his stint at Maya Pedal. If he can do it without a single accident, I will again be amazed. But I’ll restrain from joining him on that ride.