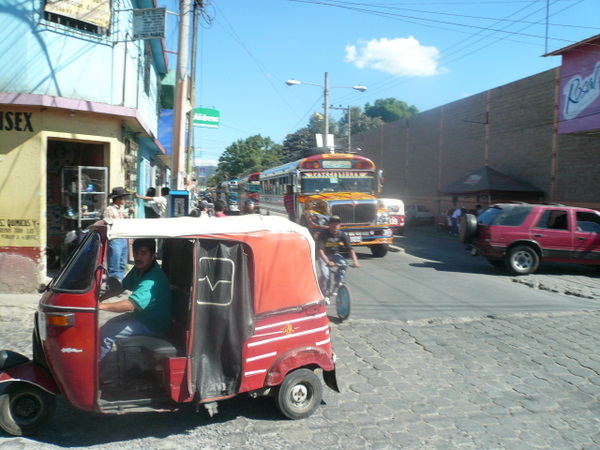 Only 19 per 1000 people in Guatemala own a car, so Guatemalans rely on other forms of transport more than U.S. citizens (for which there are 843 cars per 1000 people). This includes the following:

Of the cars that are on the roads, most of them are Japanese compact sedans from the 1980s and 1990s that are often beyond the state of disrepair. I’ve never seen so many cars with flat tires before. Some of the cars are also compact Peugeots and Chevys that are not available in the States.

Some luxury cars do exist, particularly in Antigua where you’d see a BMW or Audi now and then. I also saw a few sports cars, including an Audi TT Coupe, Mazda Miata and BMW Z3 (all first-generation ones). Surprisingly, no Mustangs.

Despite the low car-ownership rate in Guatemala, air pollution is some of the worst I’ve ever seen (probably even worse than some of the big cities in China). The problem is most cars, trucks and buses—especially those outside of Antigua and Guatemala City—are so old and on their last legs that they are belching out smoke. And these gross polluters spew out thousands more pollutants than a newer car with functioning smog control equipment.