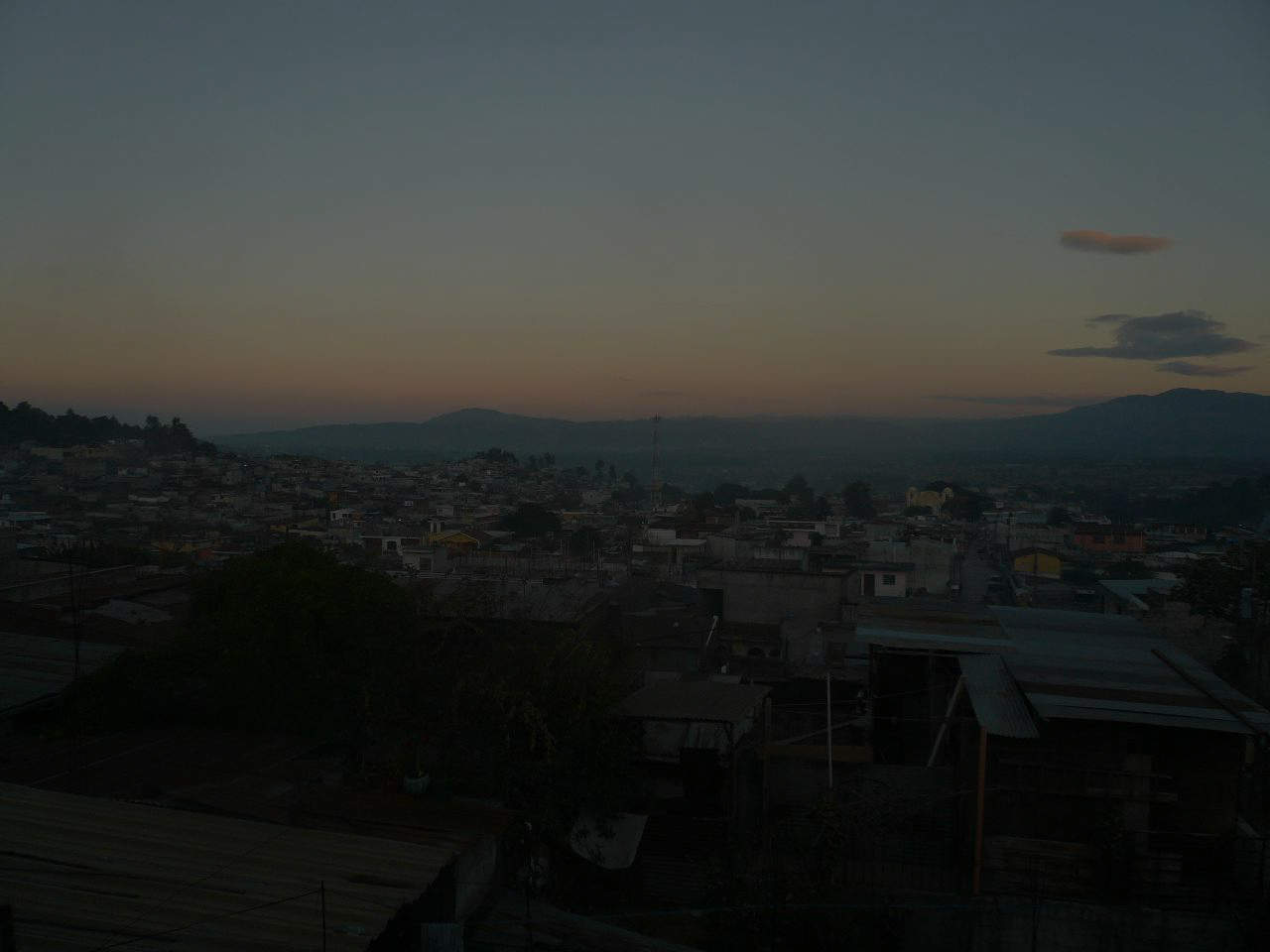 What is the sound of silence? For me it is usually no sound at all, a complete absence of noise with perhaps the exception of the fluttering of a gentle breeze, the tapping of raindrops on a window. Such tranquility can be found in abundance in the countryside, a rural area, or even a suburban area or small town. So in Itzapa I was somewhat expecting a neighborhood peace far removed from the hustle-and-bustle of, say, a Montreal or San Francisco, as this Guatemalan mountain town 18 miles west of Antigua could not possibly have more than a few tens of thousands of people, at most.

Last night was affirmation that this expectation was quite incorrecto.

It actually rained last night—which caused a mini-panic among us as some of the volunteer’s sleeping bags were on the roof, where they had been sleeping. December-April in Guatemala is “dry season,” after all. But after the sleeping bags were rescued and I realized that despite the holes in the ceilings and walls of Maya Pedal not much water was seeping in, I found the tapping of the tin roof quite charming.

The rain even put me to sleep quickly on my cot made from metal, wire and bicycle tubes and inside a sleeping bag that—in an ambient temperature of about 52 degrees—was just barely keeping me from shivering despite wearing socks and a jacket to bed. Now, granted, I am one of the soundest sleepers in the world. I once slept in a BMW Z3 roadster whose seatback could not recline back more than 100 degrees in a parking lot in Davis where trains came roaring past 25 feet away with horns ablazing every 20 minutes. This is just one example, but it’s just to say I can usually sleep anywhere and anytime.

So I hardly lifted an eyelid when a neighbor’s clock radio (?) started belching Guatemalan news and music at 2:00 a.m. to the entire neighborhood like it was a public address system. This radio (alarm?) was going off several times during the night, for perhaps 30 minutes at a time. Or at least I think so. It could have been a dream.

What was most certainly NOT a dream were all the roosters around. Now, I have yet to see one, but I know they exist because Carlos (head of Maya Pedal) bought one of these roosters on Thanksgiving and beheaded it for America’s Turkey Day. (There are still blood stains one the kitchen walls here because of that.) While the roosters are loud, they are given a run for the Mas Altovoz Competition by the hog across the street. The dogs too which—like the dogs in Panama—only seem to bark at night.

I don’t know if someone at 6:00 a.m. in the morning got tired of these roosters and wanted to announce his displeasure by honking his horn incessantly like the 10-foot-wide callejon in front of Maya Pedal was a New York highway during rush hour, but that finally fully got me out of a sleep-induced trance. That and what sounded like a helicopter hovering five feet above the roof—which of course was not a helicopter, but (I think) the water pump. (Never mind that as I type this, no water flows out of our faucets when they are turned on!)

[Edit: This helicopter noise was not the water pump. Instead, it was a neighbor running some sort of corn grinding machine each and every morning for her tortilla-making operation.]

This is all to say the nights haven’t exactly been quiet around here. Neither have been the daytimes. One reason for that are the firecrackers that every kid and their father have (I’ve seen many adults pass out these firecrackers to kids like candy), and despite having heard a bang virtually every hour, still get startled when there’s a huge explosion on the street outside and I notice the ensuing sparks underneath Maya Pedal’s front door. In a country that isnÂ´t exactly top-rate in its safety and murder rate statistics, it can be slightly unnerving.

So what exactly is sound of silence? In a week or so you may have to remind me. I certainly have not heard it around here!