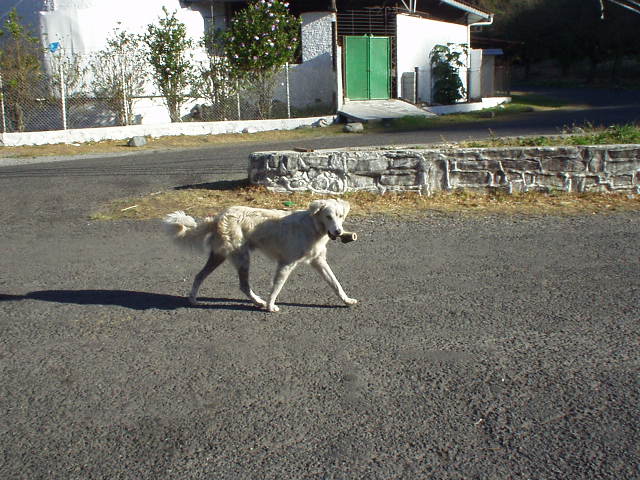 “One thing I noticed,” I remarked to my travel buddy shortly after going for a run during a glorious morning in Boquete, “is that dogs here do not bark.”

Dogs that do not bark? I could tell from the look that Tori gave me that she was a little skeptical. I might as well have told her that the birds also don’t chirp, the cows don’t moo, and Tickle Me Elmo doesn’t wiggle his belly even more than Shakira, but those would all be false statements. Whereas, I swore that I had already encountered five perros, and none of them had even let out a whimper. Nada.

Two of those dogs had even chased me—as I suppose any dog would do if all of a sudden he saw a strange man dressed in synthetic hi-tech fabrics running down the street in its direction for no apparent reason—and yet, silence. This was even after I yelled out “¡Pare! ¡Pare!” which I had believed was the word for “stop!,” though judging by the dogs’ legs that were turning over with increasing velocity, they were not quite fluent in gringo-speak. (Indeed, later I learned that the proper command is “¡Alto!“).

A few days went by and I still had yet to witness a dog actually make a sound. That is until one night Tori and I were in our hotel room, diligently doing Spanish homework, when in the distance we thought we were hearing some dogs. No, make that several dogs. Were our ears deceiving us or were they barking a mile a minute, for many minutes?

“Dogs don’t bark here, huh?” asked Tori. “Well it sounds like they are having a big party out there!”

“Um, I don’t hear anything,” I replied with a grin, although after a few more moments could not help but bust out laughing. Okay, it really did sound like a ton of dogs were having a huge fiesta! But I refused to believe it until I actually saw one bark in person… er, perro.

I promptly forgot about this until my second-to-the-last day in Boquete, when we walked back into downtown after a coffee tour. We walked by within two feet of a dog lying on the sidewalk (as most dogs seemed inclined to do in this laid-back town), and the dog barely lifted an eyelid, much less open its mouth to even yawn.

“See, it doesn’t bark,” I said to Tori, then busting out my camera and thrusting it in the dog’s face.

“WOOF!” yelped the dog, causing me to jump back.

“It speaks!” I exclaimed in excitement. “It can actually talk!”

Tori, I’m sure, was just rolling her eyes. Yet, there you have it, your intrepid blogger had indeed confirmed that dogs in Panama do bark. Well, sometimes. At least once in a blue moon when they are not having a fiesta.

Here are some more photos of a few other animals besides non-barking dogs, such as this happy pig.

WOW!! THANK YOU!!! I Googled "Amimals in Panama" and got linked here. Thank you so much for all of your pics / comments of Panama!!! My 16 yr. old son is there for a month, as a student ambassador. He's 16hrs. away from me!! AND I HAd NO Idea what kind of stuff was there! He NEVER remembers the names of places he's been to out there...isn't very detailed in his descriptions, I was clueless as to what the environment was like out there....Now I'm Not!! Thanks to you!!

Thank you so much for all the info on Panama. We are getting ready to go to panama in two weeks and are trying to decide where to go. I really enjoyed looking at all your photographs and reading your cute stories. This was one of my favorite sites on panama, you did a great job!!!!!