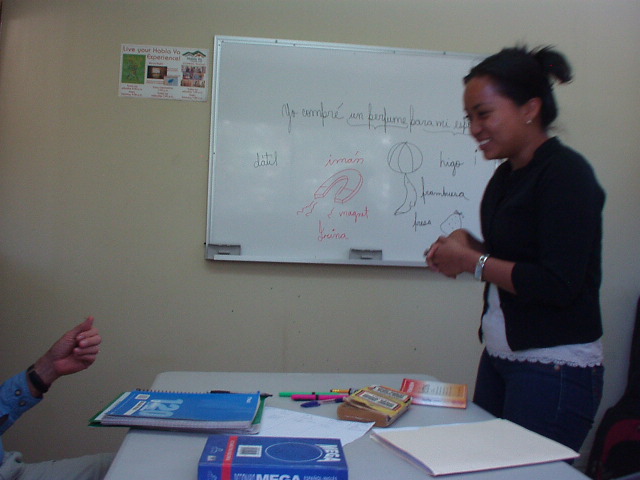 Improving our Spanish was one of the primary motivations for going to Panama in the first place. But we were only on our third or fourth day when Tori made an observation.

“My brain is FRIED,” she said during a 15-minute recess. “I think taking six hours a day of classes is too much.”

I could see what she meant. I only had three or four hours a day—mostly private tutoring—and while they were very helpful, I’m not sure if I would have wanted to do more than that especially if we were taking classes every weekday of the week. Which is exactly what we doing. I don’t think even in college I had six hours of classes a day. Okay, in elementary and high school I did, but the pace of those were decidedly more relaxed especially since they did not entail listening, responding, reading, and talking every 10 seconds or so.

Another issue was we were always doing some adventure tour after classes were over, such as going to some hot springs, horseback riding, rock climbing, and a coffee tour. After these it would already be time for a late dinner, and upon arriving back in our hotel, we might have, oh, one hour to do Spanish homework, email, and general unwinding. Oh, and blogging.

That’s not a whole lot of time for trying to absorb the new material of the day. For example, each day during classes I’d pick up 30-50 new vocabulary words. Unfortunately, I never had time to review them after class. Actually, one whole week after the lessons I’m still working my way through them.

All that said, the Habla Ya classes were fantastic.

First of all, both of the tutors I had—Bladimir and Janeth—were excellent. Aside from knowing their stuff and able to clearly articulate the nuances of Spanish grammar, I thought they did a good job catering the classes to my needs (which not only were explicitly specified by myself but also determined in part by taking a diagnostic/placement exam they had me do even before arriving in Panama) and listening to and answering my numerous questions.

It also helped that they were both happy, kind, patient, and in general, people I would have loved to hung out and interact with even if I wasn’t taking Spanish classes.

In addition to doing numerous exercises on confusing verb forms such as the imperfecto, subjuntivo, pluscuamperfecto, imperativo, etc., we also did trabalenguas (tongue twisters) to help improve my pronunciation and games such as Scrabble to keep my interest from waning.

One thing I particularly appreciated was that we spoke absolutely no English in class. Likewise, all reading material and written exercises were in Spanish. If I asked them what a word meant, they’d explain their meanings in español. In fact, I didn’t even know that Janeth knew English and Bladimir did not until Tori (who also had them) told me, as I had not attempted to communicate with them in my native language at all or vice-versa.

I was particularly pleased that despite speaking exclusively in Spanish I could understand them 95% of the time. (Even Tori, who’s somewhat less advanced in the language could generally get the gist of what they were saying in her classes.) I’m not sure whether they were talking slightly slower than they normally would, but it sure helped build a lot of confidence in my Spanish speaking and comprehension skills.

My opinion of the classes was high enough that I even wrote this testimonio for Carlos (a founder and the director of Habla Ya) for his promotional material. If there are any grammatical errors keep in mind I’m still at a intermediate-advanced level which will take far more than just seven days of classes to bring me to complete mastery, and that if it I had tried to write the following two weeks ago, it would have been much worse.

In addition to providing classes, Habla Ya also helped arrange the various eco-adventures Tori and I did. Supposedly, this resulted in some savings; at the very least, it was convenient.

One other side benefit I did not anticipate with taking the classes was meeting and seeing the same (or new) friendly faces every day, including staff and students. When traveling in a foreign country where you’d otherwise know nobody, that provides additional comfort and memories.

I’d love to do something like this again, although next time I may consider taking less classes per day and/or less days per week stretched over a longer period of time to help avoid “fried brain” syndrome.

Here are more Habla Ya testimonials, including one I wrote.