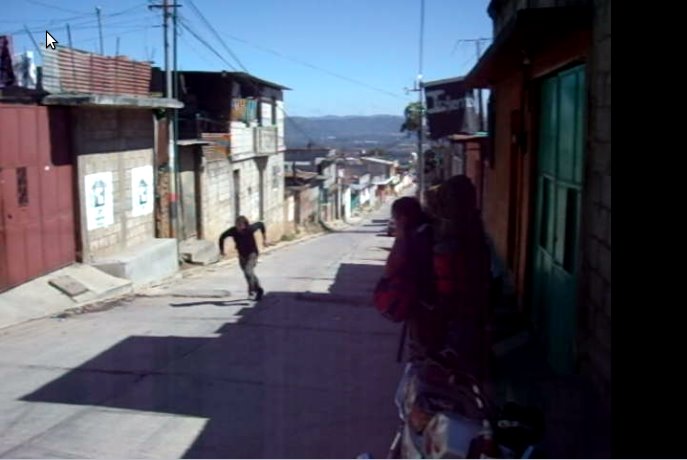 How people spend their tiempo libre is one characteristic that differentiates a culture from another. Predictably, in a relatively poor country such as Guatemala it is much more likely to see kids throwing a partially inflated ball at a lopsided hoop than crowding around a Nintendo Wii. Or—as happened to me the other day—have a drunkard come up (after yelling, “Hey, Chino”) to talk about fútbol and tell you why the U.S. will never win the World Cup.

But neither basketball or soccer can hold a candle to the pastime shown in the following video that I took while volunteering at Maya Pedal:

I say this because as soon as I stepped outside the Guatemalan International Airport, I was surrounded by kids who were tossing marble-sized firecrackers onto the ground whose supply of ear-splitters was quickly replenished by their fathers passing them out like candy. Granted, it was Christmas Day when the kids and adults were in a particularly festive mood, but I heard these types of deafening explosions every single day during my two-week stint in Guatemala. Almost every single hour, too, including some vampire-stirring times of the night.

Why a country that was torn by war just a decade-and-a-half ago—and is currently struggling with growing violence while under siege by powerful drug cartels—would be so fascinated with these little explosive devices is a little curious.

Without a doubt, firecrackers are unregulated here. Around New Year’s Day, some vendors even spread a table length’s quantity of them 100 feet from Maya Pedal. On the night of New Year’s Eve—with a loud bang reverberating off Maya Pedal’s metal door with every one of my heartbeats—it sounded like we were being shelled. A white flag would do nothing to abate the Guatemalans’ enthusiasm for the little Big Bangs.

I suppose the people here might as well continue trying to deafen their neighbors and themselves. Everyone needs some diversions to fill their free time; why not firecrackers? It’s not like Guatemala is ever going to win the World Cup in soccer, you know.