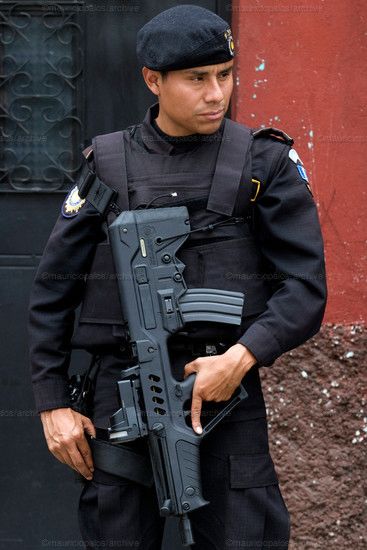 There are numerous reasons why Guatemala isn’t exactly a country you’d send your grandmother off to for a safe, care-free vacation. The country has a history of war and violence, of poverty and ineffective government, and with a lucrative drug route running through the country from Honduras to Mexico, powerful drug cartels have had a literal death grip in regions such as the province of Alta Verapaz. So while these gangs and other criminal elements have been robbing and murdering with near impunity, it is not surprising that the innocents have been taking some measures to protect themselves. For example, carrying guns long enough to whack a baseball over a fence.

For example, when an incognito delivery truck came and parked outside Maya Pedal, its driver hastily opened the cargo bin that was full of unmarked, brown packages while his sidekick stood guard sporting a rifle diagonally across his chest. Later in the week, I saw the same thing with another vehicle making a delivery to a panadería—heaven forbid that someone would dare steal bags of flour and pastries. The other volunteers also told me that it was not uncommon for extremely wealthy people to have personal body guards in this country.

Of course, it makes sense that if commoners were going to be as armed as a rural Texas cowboy, then the police were going to have to be weaponized as much as Commando. So I guess it shouldn’t have been a surprise when—on my last full day at Maya Pedal—a duo of police officers walked purposefully into our little shop, one of them with a machine gun slung over his back.

The less conspicuously armed officer went over to talk to Carlos while Shakirah—one of the other volunteers that arrived this week—joked in English, “They’re looking to see if we’re employing any child labor here.” Moments later, Machine Gun Cop was asking if we had any aluminum bicycle frames. Since I had seen a couple Al frames on the roof earlier in the day and could not resist talking about bicicletas de aluminio, I replied in the affirmative and asked if he’d like to see what we had. “Arriba (upward),” I said while leading the policeman up the stairs.

As I showed him an early 90’s Centurion TIG-welded frame and a “muy pesado” full-suspension mountain bike, we engaged in a full-on conversation alone on the roof for 15 minutes. I was particularly pleased (relieved?) that the man did not get angry after I mentioned I was from the United States. Actually, this guy with the machine gun was the friendliest cop I’ve ever met in my life, and when he and his sidekick were ready to depart, he patted me on my back, complimented my Spanish and shook my hand. I could only imagine the grin on his face if he actually had to deploy his hulking weapon on the bad guys.

And speaking of armed thugs? I was fortunate enough to have no encounters with any of those. Personally, I’d rather keep it that way. Meeting an amiable officer of the peace carrying a weapon capable of taking out a tank was exciting enough already, thank you.