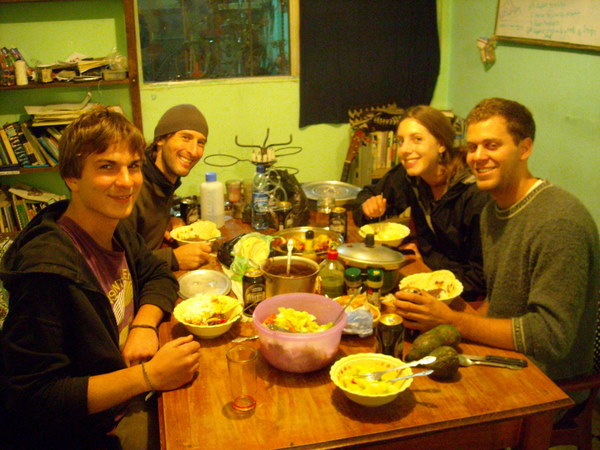 With each passing day in Guatemala, I became more and more at ease in chatting up a storm in Spanish, a language I have been practicing regularly for almost a decade. One nice thing about Guatemala is that its people tend to speak more slowly and clearer than, say, Chileans or Argentineans (and even more so when they are drunk). Thus, 70-100% of the time, I can understand what they are saying.

But it wasn’t until this afternoon that I got my first real test as to how well my español has come along. It was during a monthly meeting of the junta—the local group of empowered businessmen and leaders who comprise the board of directors of Maya Pedal—when all the volunteers were summoned into the tiny dining room next to the shop.

When we first came in, I figured the junta wanted to discuss its goals and plans for Maya Pedal and ask for suggestions for improvement (of which I had many). Or, perhaps, they merely wanted to thank the volunteers for their hard work. But instead, they wanted an explanation. One of the men of the junta—the father of our 21-year-old Guatemalan bicycle mechanic named Allen—was holding in his hand a sign that we had drawn up and taped onto the computer monitor that morning.

NO TOCAR [don’t touch]. This means you, Allen!

Bruce began the oral explanation. “Una broma,” he said, to little satisfaction of the junta. “Una broma?” replied the inquirer, incredulously. He looked at all of us as if we had just insulted or disrespected his son. “Sí, una broma,” Bruce insisted. But as Spanish words were not exactly spilling out his mouth, Bruce looked at me, essentially passing the over the baton. There was a technical explanation, after all, which I was best suited to.

All 12 pairs of eyes were now directed on me as I began to recount the facts in my American español.

“The computer,” I began, “had a virus. A very malicious virus. It was so bad that we couldn’t do anything but use the web browser.

“But during that time, we did not want anyone to touch the computer while the application was running. Hence the sign.”

The junta leader immediately replied this was an acceptable explanation and thanked us, asking just a few more questions that I was able to readily answer. His only suggestion was that when we do something, we communicate with Carlos and Allen. I agreed, although in reality we usually made them aware of what we were doing whenever they were present in the shop (which was not every day I was there at Maya Pedal). Bruce even interjected, “sí, TODOS” (all) needed to communicate better with each other.

The good thing was, at least it seemed like that my proficiency level in Spanish is no longer a major obstacle in such communication. That was demonstrated with the junta today.