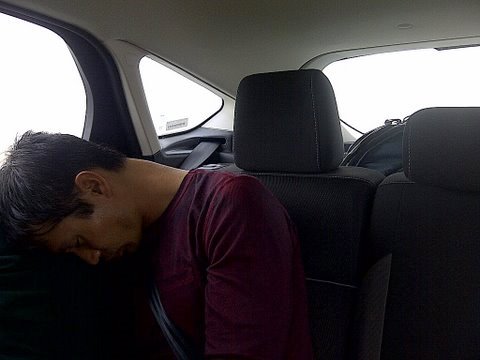 There aren’t a whole lot of things I am especially talented at, but being able to sleep in almost any place at any moment seems to be one of them. I have slept in every single car I have owned—a feat noteworthy considering that almost all of them were two-seat convertibles with non-reclining seats—and I’ve more frequently dozed off on a flight than not. If the wooly sheep that people count when they can’t fall asleep in bed relied on me to number them off, each one of them would be wearing a number in the single digits. And go quickly out of business.

Usually during those times I doze off into dreamland all alone, but in this day and age where even Dumb Phones have cameras, it seems like an alarming number of people are starting to take photos of me sleeping. I think it all started on a trip to China, when my friend John took a photo of a woman in our tour group napping on my shoulder:

Now that might look very sweet and all, but the photos get worse. For example, here is one Alyssa took after our hike with Bryan at Big Basin, while we waited for a table at an all-organic restaurant in Palo Alto. (“I think we broke Felix,” Alyssa would later claim.)

At least my mouth was closed in that one. That can’t be said about me while in a Taco Bell coma (“best food in Pahrump”) en route to Badwater with Alene and crew:

Then there is this photo taken en route to California and the Furnace Creek 508 from Colorado, in which I slept in the back seat about 80% of the time. I guess I was really tired.

I’m not exactly sure what is the fascination with me sleeping, though. Yes, I may be talented at it, but so is a dog or a cat? At least it sure makes traveling from Point A to Point B go by a lot quicker!