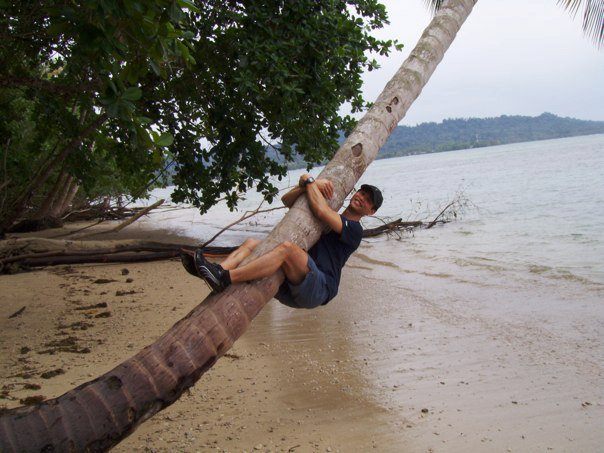 After the easterly 205-mile drive from Dominical on the Pacific Coast of Costa Rica, we made it to Cahuita. It turned out that being on the east coast was well worth the eight-hour journey—well, except for maybe the fat mosquitoes that feasted on my veins while I lay in bed listening to the splashing waves of the Caribbean.

Here’s a report from Tori:

Felix was the only one that got bitten. And it is still a mystery how they got him under the mosquito netting. Raquel and I were left unharmed.

The east side was awesome. It was much more local feeling with a Caribbean flavor. Cahuita is a tiny little town. We did a nice hike in the National Park one day which was beautiful and lush and along the coast for parts. Although we didn’t see too many animals on the hike, we saw several at breakfast at our hotel: a group of monkeys came to visit, a little lizard came to snack on our jam, and the local parrot took our 4th seat at the table and chatted with us.

The next (and last day) we went to the Sloth place and Jaguar Rescue; both were awesome. I personally liked the Jaguar place more since it had a variety of animals and we got to play with a group of baby howler monkeys.

Before we left town we had our last good meal in Costa Rica at a great on-the-beach place. As an appetizer we got a sushi/ceviche thing [carpaccio] like the one the chef at the house made us. It was super tasty! After the fact we learned it was shark.

In short, it was what I expected/wanted and more. I wish we had a couple more days there.

I concur with Tori and could have easily enjoyed spending a couple more days there too. By that time I probably would have figured out how to keep those vampire insects out of my sleeping space.