When the Pontiac Solstice was unveiled as a concept car in 2004, I was absolutely in love. Here was a back-to-basics roadster that looked modern and classic at the same time, one that harkened back to the classic British sports cars of the 1960s but unveiled by an American manufacturer that knew how to make cars with good electrical systems, torquey and oil-tight engines, and effective creature comforts like ice-cold air conditioning. General Motors even promised the car would be accessible, in the same price range as the dynamically excellent but meh-styled Miata. This was the car I had always hoped a company would bring to market, and it was a surprise to me that that company would be GM!

For 3-4 years, at least. Then the car—actually, all cars from the Pontiac division—ceased to be made, a victim of the Great Recession. Not that the Solstice didn’t do its part. In its first 10 days of availability, 7000 (or the entire allotment of first-year planned production) were already ordered, and the car even outsold the Mazda Miata—the world’s best-selling sports car—in the U.S.

It was a car that I always admired, but largely forgot about due to not seeing any around Colorado. But then I looked on Turo—the AirBnB of cars—for a sports car with a manual transmission to rent and drive along the Oregon Coast, and a silver Solstice GXP with white racing stripes popped up. Perfect.

So one day in late July 2019, I hopped on flight to Portland, then used that city’s excellent mass transit system to arrive at the Solstice owner’s house in Vancouver, Washington… and there it was sitting on the driveway. Mine for the next six days. This was an ideal test driving opportunity, one I’d be able to assess the car’s merits, its faults, and whether it deserved to be on the short list for my Audi TT Roadster Quattro‘s eventual replacement.

The owner showed me some of the unique things about the car, including how to operate the top. This revealed the car’s first yellow flag: there was virtually no trunk space after putting the top down. Good thing I travel light and brought nothing more than a laptop bag. If I had brought a suitcase, I’d have to have stowed it unsecured in the passenger area. If I had brought a companion, the top would have needed to be permanently up the whole time—and some of the luggage still might need to be on her lap! 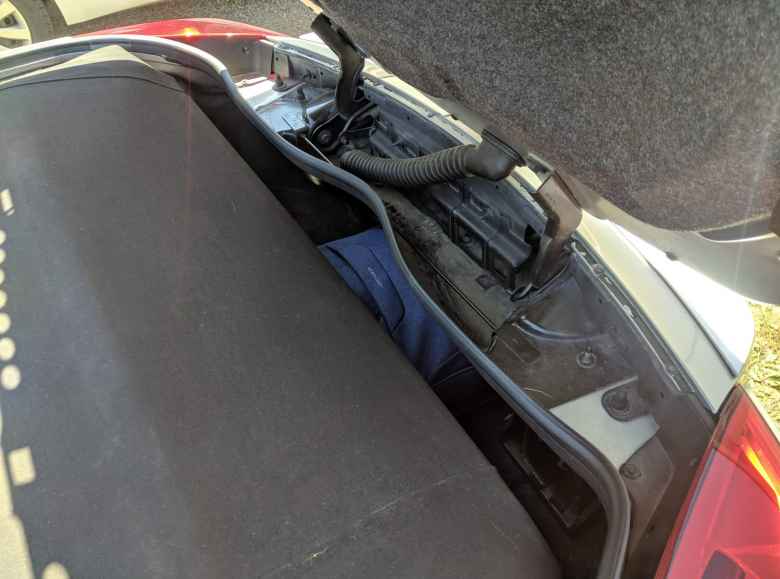 It brought to light just how practical my sports cars really had been. Heck, even Goldie, the 1969 MGB, had more trunk space at all times despite having a spare tire, and there was always the parcel shelf behind seats that could carry a couple small suitcases if needed. Ditto goes for my current Audi TT.

In contrast, there is no space behind the front seats in a Solstice. Well, virtually—I was able to stash an empty reusable cloth bag (like for grocery shopping) back there. And storage compartments inside the car are essentially nonexistent too.

There are no door pockets, for instance. There are these little ledges on the door, but they are literally only deep enough for a toothbrush. 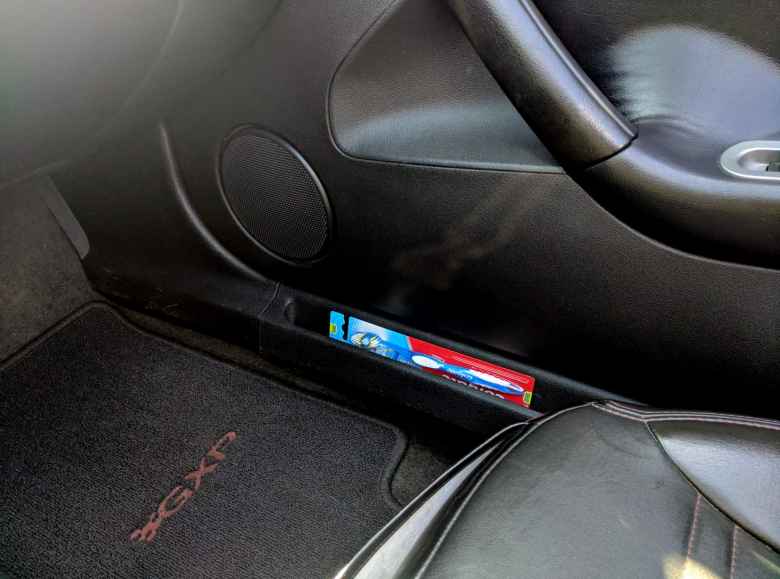 There’s also a bin between the seats, but it is only large enough for a few small items: 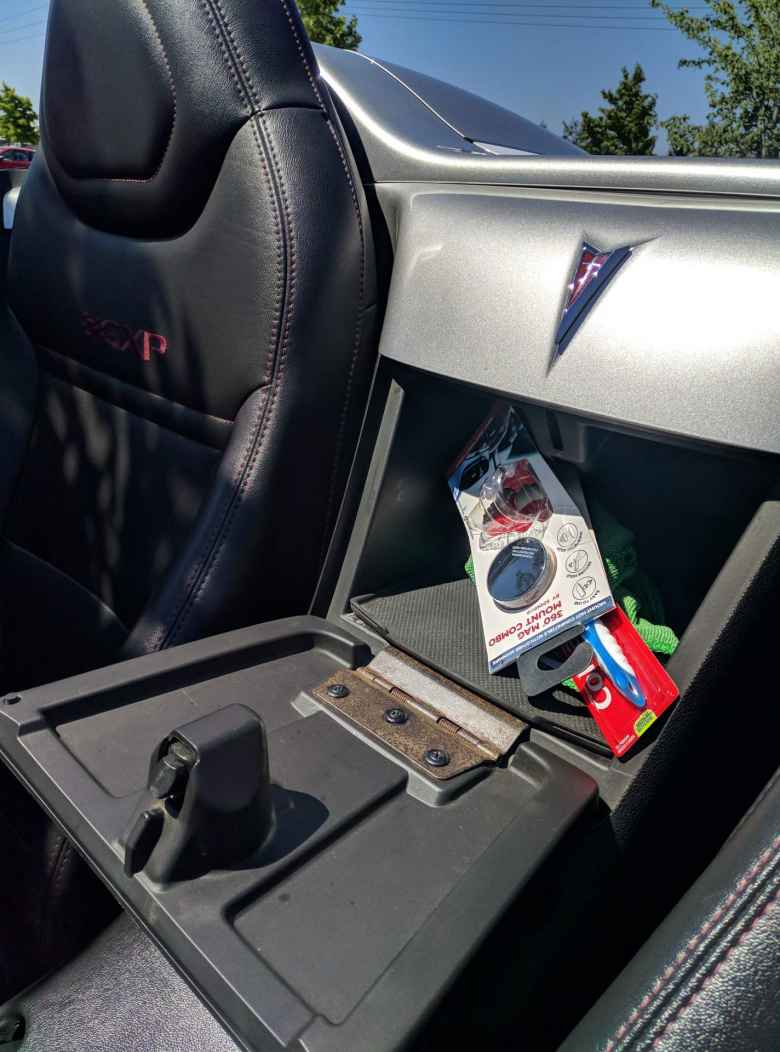 At least there were cupholders. That’s more than could be said about the MGs, Porsche 944 Turbo, BMW Z3, and Alfa Romeo Spider Veloce that occupied a spot in my garage at some point in the past. But this being a modern American car, of course it had something to carry vessels of liquids. Just don’t expect it to be able to hold a Big Gulp.

In fact, the retractable cupholders were so shallow that this 16-ounce water bottle kept flying out of them. 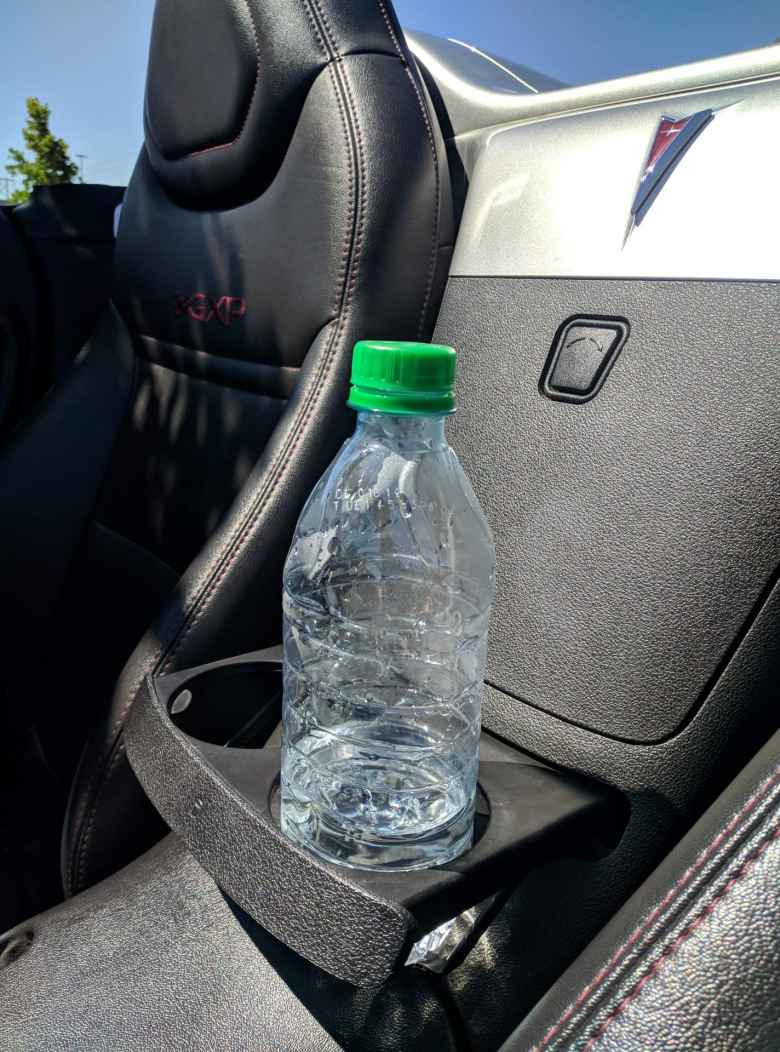 The Solstice does have seat pockets, however. On the front of the seats! At first I laughed when I spotted them. Like what good are those tiny things?

As it turned out, they were useful for holding sunglasses. Or a sunscreen stick. Or a USB cable. 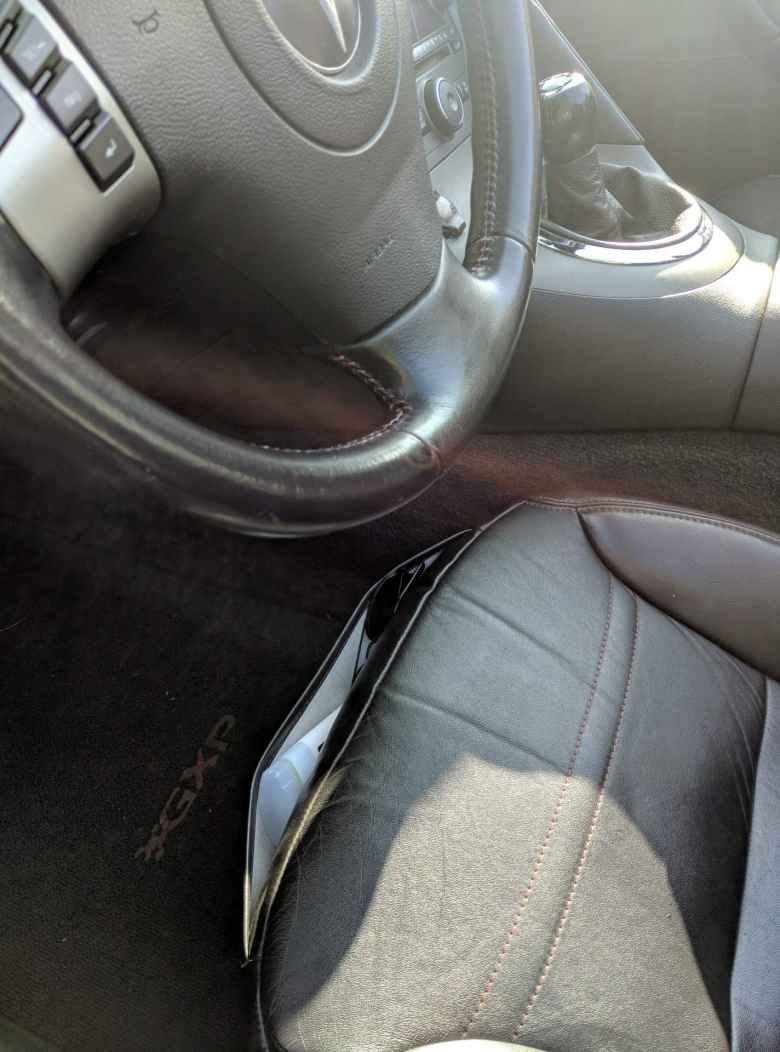 Then there was the matter of the top. I guess I have been spoiled by modern-day convertibles. To lower the top in the Z3, for instance, you undo two latches, push a button, and voilà! Ditto for the TT, except that you only have to undo one latch. Even in the Alfa Romeo Spider—which traces its design back to the the late 1960s—had a top where you undo two latches and can throw back the top with one arm while sitting in the driver’s seat.

Hence, I was bemused to find out that the Solstice requires you to get out of the car to put down the roof. It’s manually actuated aside from an electric mechanism that allows the trunk lid (i.e., tonneau cover) to pop open. The whole procedure is as follows:

As you can tell from all the above, the Solstice may be the most impractical car sold in the 21st century. It’s just a few rungs above a motorcycle in that department. I couldn’t help but think that this was a classic embodiment of form before function.

But oh, that form!

There are elements that are reminiscent of classic roadsters. The twin kidney grills at the front, for example, remind me of an MGA. The round headlights flanking the kidneys are like those on numerous sports cars from the 1960s. The wheel arches are very round like an Austin Healey 3000’s. The curvaceous fenders recall some of the world’s most beautiful designs like the AC Ace, in contrast to the bar-of-soap profile of the third-gen MX-5 Miata, the Solstice’s primary rival at the time.

The round theme continues into the cockpit. All the gauges and controls are round, and the circular vents are almost exactly like those of my former Alfa Romeo Spider. The dash is cleanly laid out, driver-centric, and has a simplistic charm much like, say, a Shelby Cobra’s.

Whether or not the classic design cues were deliberately cherry picked by GM’s design crew headed by Franz von Holzhausen (now Tesla’s Chief of Design) is of little importance; what matters is that everything comes together into one cohesive, distinct design. Holzhausen’s team absolutely batted the ball out of the ballpark: what a gorgeous piece of art the Solstice is.

Every time I’d park the car and walk away from it, I couldn’t help but swivel my head all the way around to admire its beauty. Is there a more aesthetically pleasing car out there that was designed in the last 25 years? I prefer its shape over any exoticar out there (e.g., Ferrari, Lamborghini, and McLaren) and, well, everything else. The Audi TT—what I drive today—comes close. But I remember seeing a BMW Z3 parking near the Solstice, and thinking that the Solstice looks way fresher—and that’s despite owning a Z3 before and thinking at the time it was one of the best-looking new cars out there.

Happily, the Solstice is not merely a beauty queen. It’s also an über-athlete that dances well and can sprint. Especially the GXP model I was driving with the stick.

The steering was very direct with gobs of feel and no loosey goosey play. Cornering is super flat with virtually no perceptible body roll. Nevertheless, ride quality is still very good, absorbing bumps with aplomb. If only my PT Cruiser GT had such good suspension!

The manual transmission, while having merely five speeds, also was a delight to shift. The TT has shorter, quicker throws, but the placement of the Solstice’s shifter is perfectly at hand. The gear spacing and also the shift feel reminded me of the Alfa Romeo Spider, despite the throws being not nearly as long and the gear lever not sprouted out from the center dash.

The engine in the GXP: fantastic. It has a 2.0-liter engine, the same size as my former Alfa’s. But due to direct injection, turbocharging, and other modern tricks, the motor generates literally double the peak power, or 260 hp. That’s as much as a Porsche Boxster S of the same vintage. 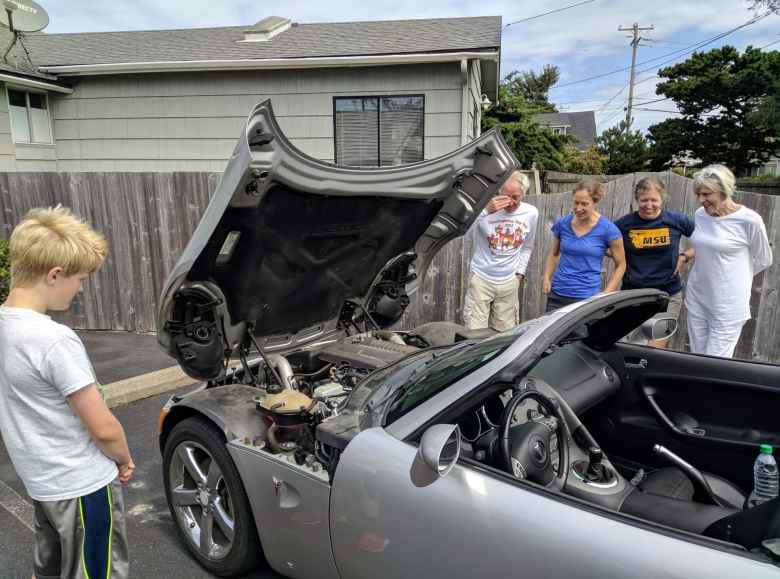 The engine pulls too. Unlike the first-gen TT’s, there is no turbo lag. But like the TT, its exhaust note is melodic, sonorous. At least it sounds that way with the top or windows down. With the top up, the cockpit is quiet, with the engine sounding exactly like… the Alfa Romeo Spider’s. It was eerie considering the Spider’s motor sounded more like a sewing machine than any other four-cylinder I’ve experienced.

Oh, and despite the power, I should mention the car averaged 31 miles per gallon over the course of my trip. The GXP requires premium unleaded, but the gas mileage gets half a practicality point nevertheless.

The excellent engine, transmission, pedal placement (perfect for heel-toe downshifting), chassis, suspension, and steering made for some of the best driving I’ve ever experienced.

And after a couple days, I didn’t even mind the seven-step procedure for putting the top up or down. I got so good at it that I could do it in about 30 seconds, and it just added to the character, the theater. And in reality, it was still way easier and quicker than, say, putting up the leak-prone convertible top of an MGB, or even a modern Jeep Wrangler.

The car’s lack of space also was hardly a fatal flaw. I travel light and am not a hoarder. The car actually jives with my minimalist tendencies.

Indeed, when I returned to the Denver International Airport and “had” to drive my Audi TT back home on a summer night with the top down, the TT felt like a letdown—the very first time I’ve felt that way after renting a car. A large part of that was how much more intimate the Solstice feels with its driver-oriented cockpit, lower seating position, and less elbow space (e.g., the Solstice’s tall and wide transmission tunnel, which contributes a lot to the car’s excellent structural rigidity, doubles as a nice armrest). In the TT, you feel like you are sitting on the car, like a canoe. In the Solstice, you feel like you are sitting in the vehicle, like a white-water kayak.

The long drive home in the TT in early morning summer darkness gave me time to reflect just what made me adore the Solstice so much during my whole time with it, despite its obvious lack of practicality.

Yes, its looks were stunning. It made the right moves and sounded so good.

But it was also un-watered down, uncompromising, unapologetic and polarizing. I decided that it was like a yoga-instructing track athlete who danced and sang but always took her time to get ready; primarily wore tight, sexy dresses; was reluctant to do chores and absolutely refused to help move furniture; but otherwise was a sweet, fun, dependable, confident, and drop-dead gorgeous partner that was easy to love and a delight to live with.

For me, it was love at first sight and also love at last sight. The Solstice GXP is definitely on my short list as a potential future roadster to grace the garage. If not, I suppose there’s always Turo for the occasional fling… 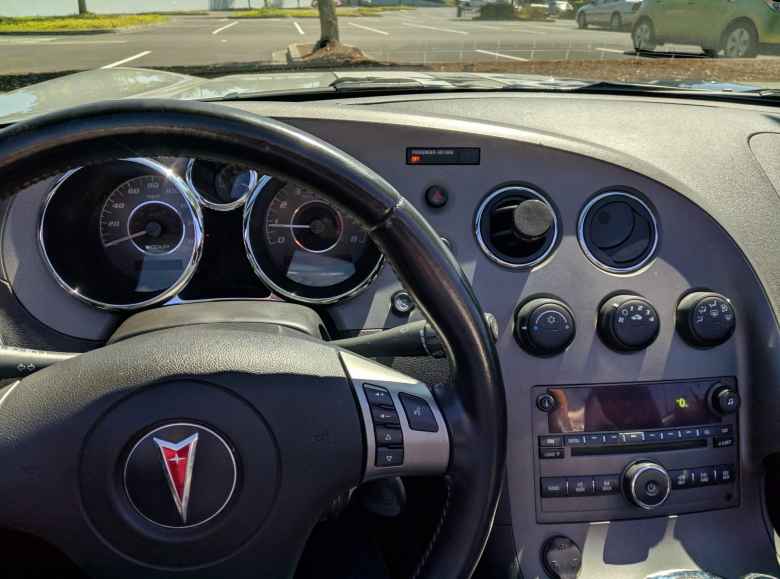 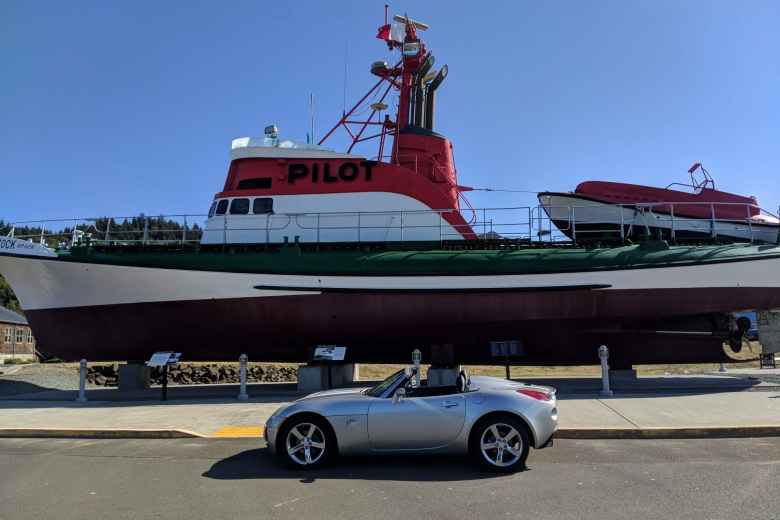 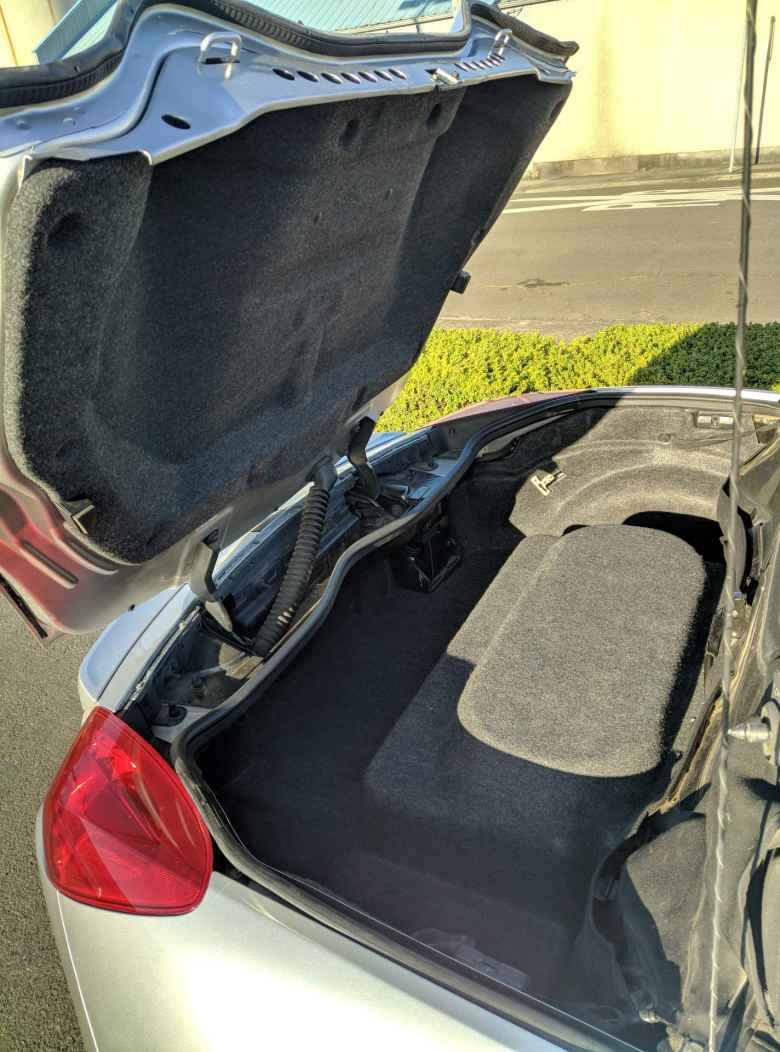 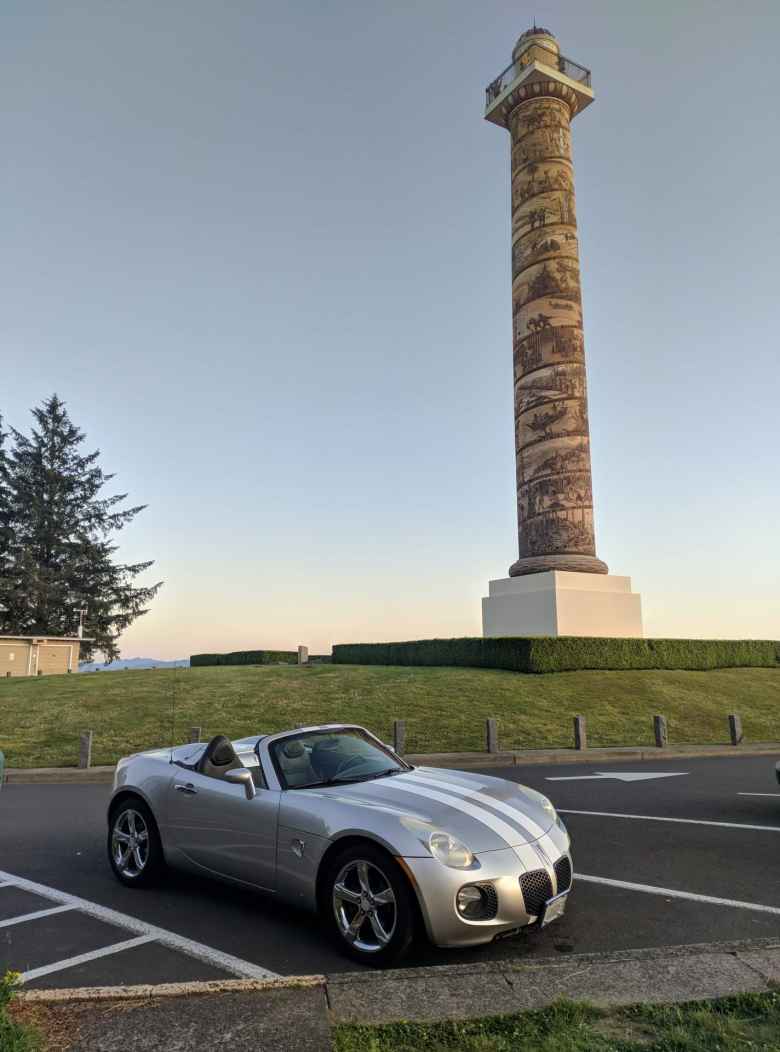 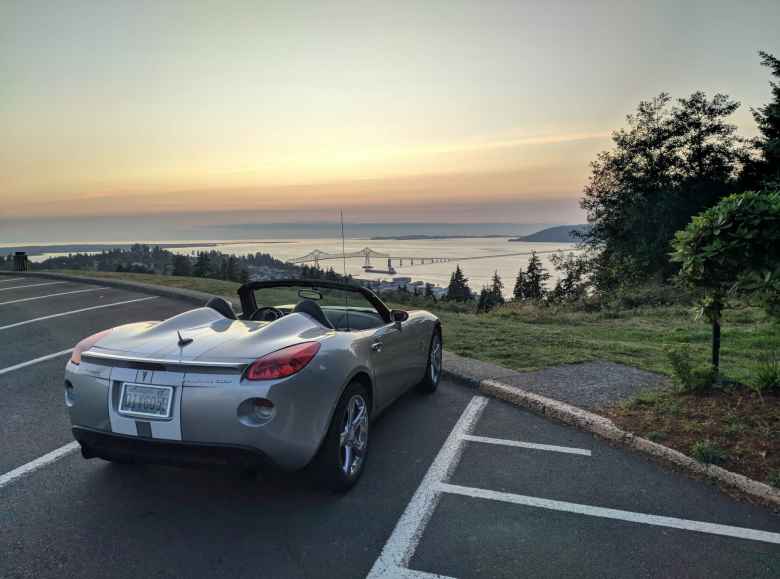 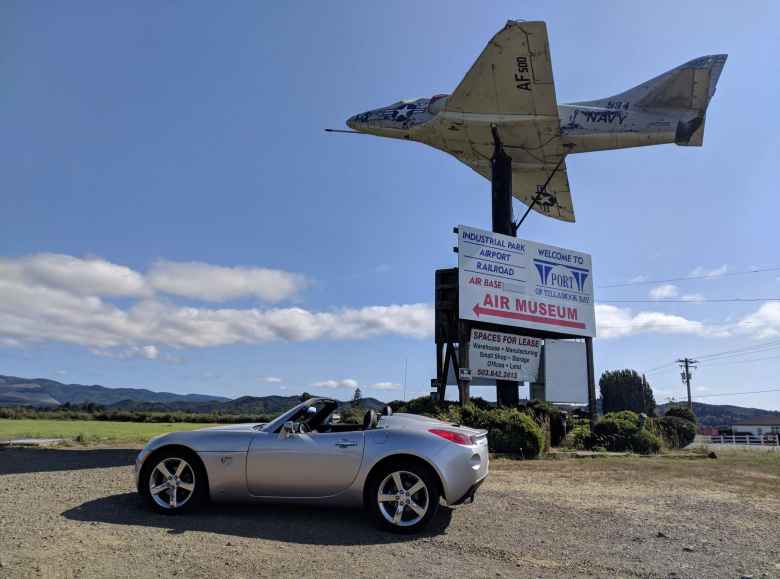 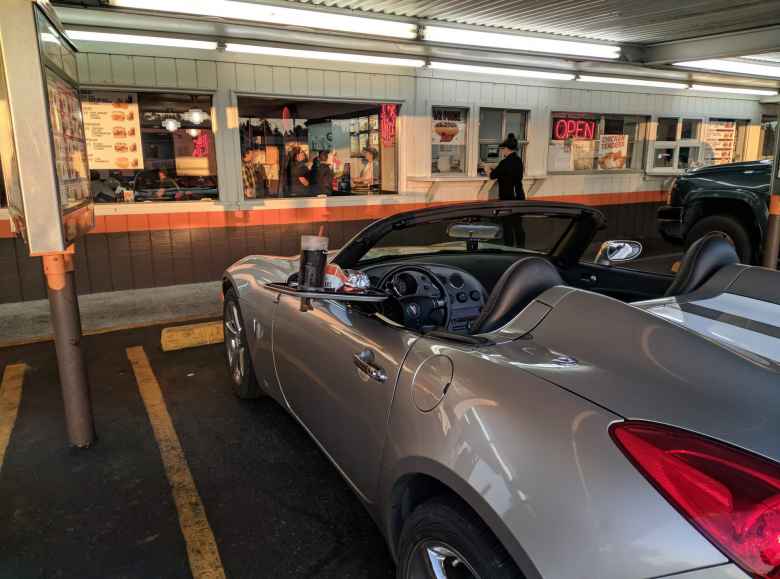 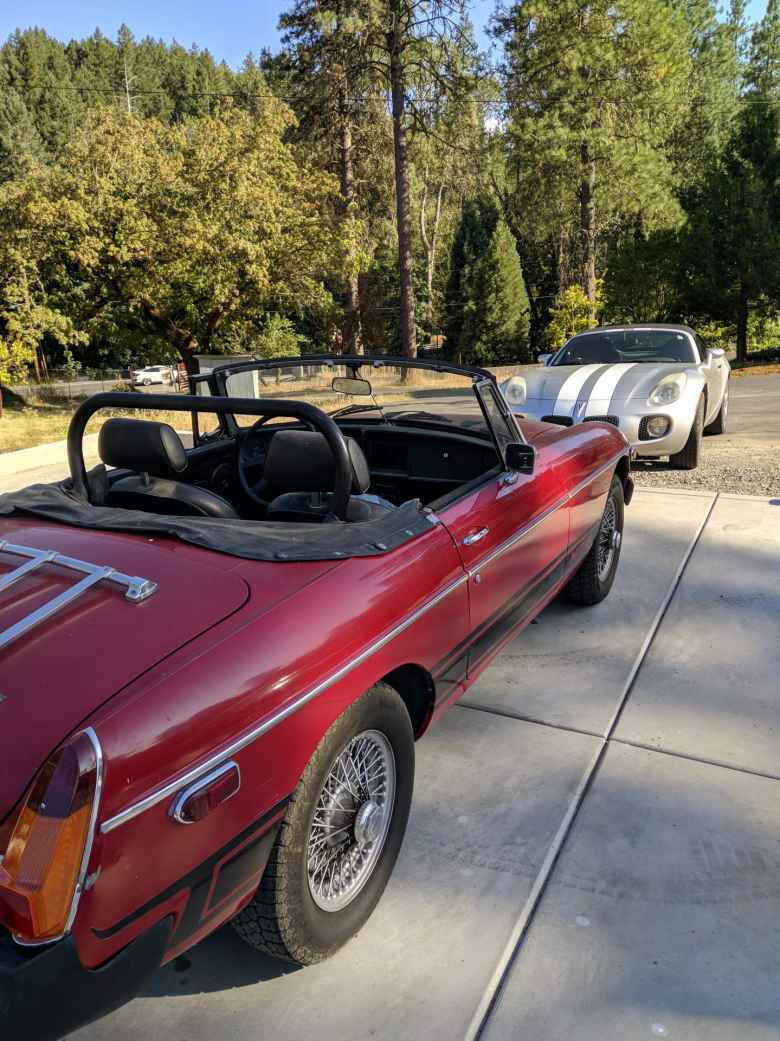 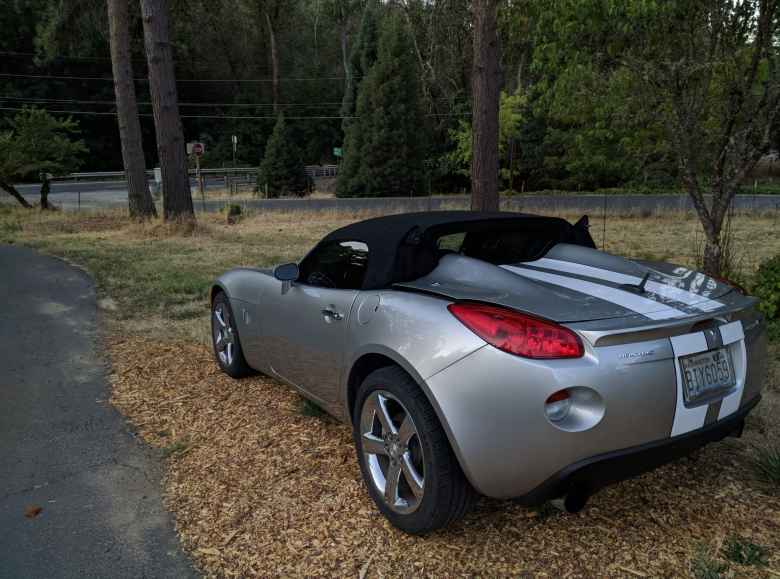 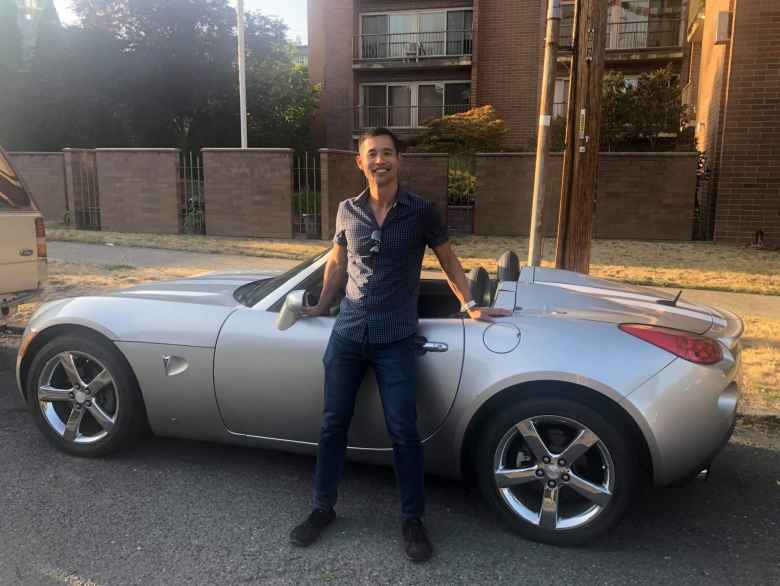