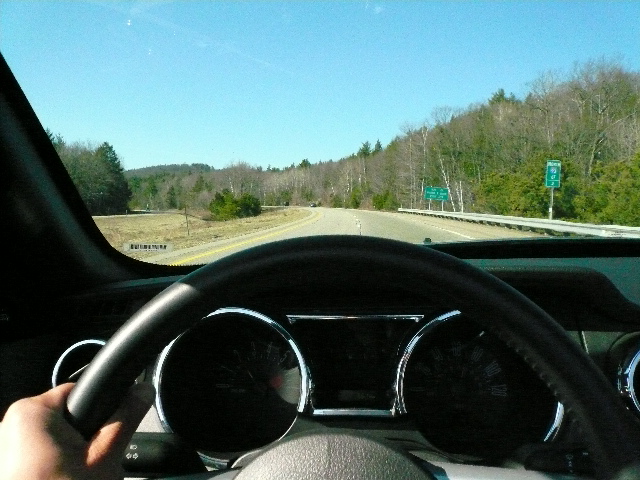 One could probably say that my northeastern U.S. trip started sub-optimally. After sleeping only one hour, I was blasted out of bed by my 100-decibel alarm clock at 3:30 a.m. and due to my grogginess, driving down towards the Denver International Airport was quite a chore. (Should’ve taken the Shamrock shuttle instead.) Then, on my Southwest flight to Manchester, NH, I was completely enveloped by the Texan Congregation of Fatsos which made sitting (much less sleeping) quite uncomfortable.

The woes of the morning were suddenly erased when I arrived at the Manchester airport, with just one sentence from the girl at the rental car agency (Budget) that I had a reservation with.

“For the same price [of the economy car], how would you like to rent a Mustang convertible instead?”

What’s that? For $15/day I could rent a new ‘Stang—and a topless one at that—for my New England driving tour? I’m not sure why I was offered this but it did not take me very long to jump on that opportunity!

Maybe I was offered this because no one in New Hampshire wants to rent a convertible in April. I’m not sure why, as the weather today was gorgeous—as in “too hot” for me to have the top up. I corrected that by undoing two latches and pushing a button inside the ‘Stang that instigated a well-choreographed electrically motorized sequence of events: all windows rolled down and the convertible top gradually flapped open until it was at the same level as the rear boot.

A twist of the key caused the four-liter engine to positively roar to life. It was a V-6 and not the famed 4.6L V-8 of the GT version, but it still put out 210 horsepower (or more than the Mustang GT of the 1980s) and sounded absolutely befitting for a pony car.

Anyhow, so with the top down I went up towards Littleton (recommended in a book I have with me called Great American Motorcycle Tours) and then Conway to do a little exploring. While virtually every road I drove on today—even the Interstate!—could be rightfully called “scenic,” the gem of the drive was certainly the Kancamagus Highway through the White Mountains between Lincoln and Conway.

This highway—which refused to go straight for more than a quarter-mile—was flanked by four-foot-high snowbanks (the result of exuberant snowplows of weeks past) and dense forests of 100-foot trees.

As I drove through this region, the rays of a lowering sun bounced off the tree tops causing to them to looked like their tops had been bleached. I even shut off the Mustang’s excellent 500-watt sound system (replete with 10-inch woofers in the doors), opting to listen to the throaty exhaust note reverberate off the snowbanks instead.

The entire highway was remarkably devoid of traffic aside from a motorcyclist brave enough to withstand the elements (in contrast to Manchester, it was quite cold up here) riding a Suzuki GSX-R750. I waved him by as the ‘Stang—while fairly nimble for such a big, heavy, car—was nowhere as agile as the race-bred Gixxer.

I stopped quite a bit to shoot photos, but unfortunately, cannot upload them right now since I absent-mindedly forgot to pack the camera’s USB cable. Ah, well—when I return to Colorado on Tuesday night, I will begin posting them.

In the meantime, I will just enjoy exploring more of New Hampshire (and tomorrow, Maine)—and driving this American icon with the top down through some of New England’s finest roads.

The Texan Congregation of Fatsos... hey, I've been on flights with them, too! 5 of the 10 fattest cities listed by Men's Fitness magazine are in Texas... and if you've ever been to TX, you'd understand why. ;-)

Sounds like you had a fun drive through New England. I can't wait to hear about the rest of your exploits there and about the Boston Marathon. :) ↩ Reply

What an inspiration your travels are...Ojala, we plan to do a similar New England trip for the fall color.

Keep living large, Felix - you provide context for those of us who might otherwise stay bogged down. ↩ Reply