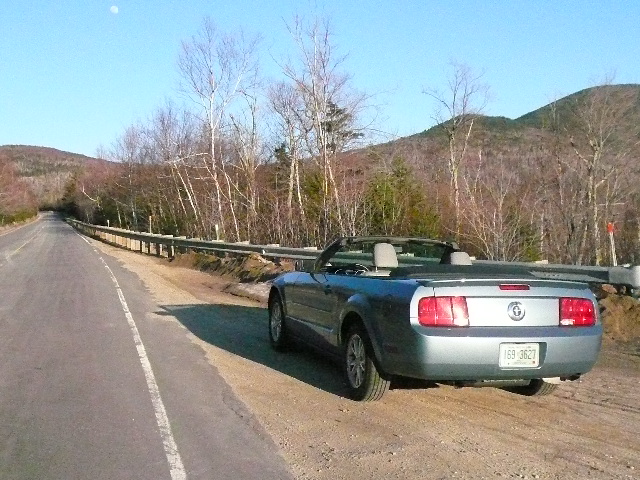 “Since ‘The Kank’ has no gas stations, stores, or hamburger clowns on its 34-mile stretch to Conway,” wrote Gary McKechnie in his book, Great American Motorcycle Tours, “the town of Lincoln has thoughtfully added a flood of ugly stores and smelly things. Race past these and into some of the most mind-boggling alpine scenery and rideable roads you’ll encounter. Goose it to 60 and get into the rhythm of the road, but be prepared to brake when you reach some 20 mph hairpin turns that deliver you to scenic viewing areas such as the Hancock Overlook.”

These words came to mind as I followed a Suzuki GSX-R rider, not nearly able to match his speed or corner-carving prowess and bemoaning the fact that my rental car had an automatic slushbox instead of a proper stick. But that was the only complaint I had, and it was a minor one. After all, here I was in the White Mountains in a Ford Mustang convertible—much better than, say, a Ford Focus I thought I was going to get from the rental car agency—and the weather was gorgeous enough to have to top down all day. And the alpine scenery was, well, mind-boggling all right.

So was this highway. In some sections, there were three-foot-tall piles of snow pushed off to the side by snowplows in weeks past that provided a nice contrast to the dense forests everywhere else. The ‘Stang’s rumbling exhaust note from its 210-hp 4.0-liter V6 reverberated off of these snowbanks and back into the cockpit whenever I’d open up the throttle. I did this often, since as McKechnie wrote, “the road switches more frequently than Little Richard.”

And like the hits by Little Richard, this drive was classic.

[April 17, 2009 (Fri): I would only realize this one year later, but I was doing this drive on the 44th birthday of the Ford Mustang. How appropriate.]