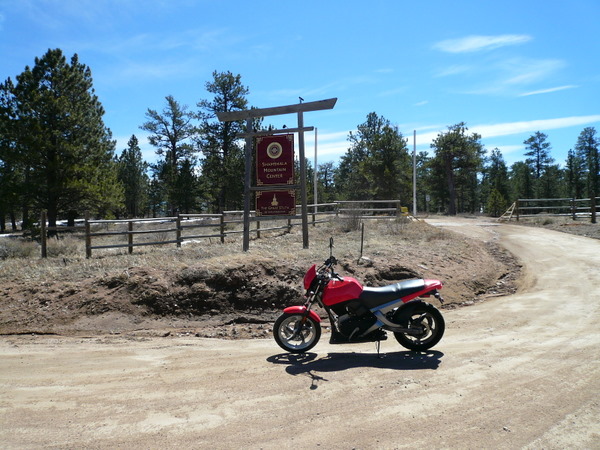 Today being Tax Day, I celebrated being done with my taxes months ago by doing a little exploring of the Red Feather Lakes and Poudre Canyon regions just to the west of Fort Collins. Since it was a glorious 75 degrees out, I donned my motorcycle pants and took the Buell for a spin.

Let me tell you the Poudre Canyon (Highway 14) is FANTASTIC for motorcycle riding. Riding down this snaking, scenic road alongside the Poudre River was one of the best drives I’ve done anywhere—especially since there was virtually no other traffic. In fact, there seemed to be more motorcyclists than cars—and just a handful at that. On the sides of the road were tall rock walls that were bolted for sport climbing, which I will have to check out soon.

All in all, Boo and I went about 120 miles—including maybe 10-15 miles off-road. Actually, for the day, we went about 130 miles because later that night, I went back home to fetch Boo to sprint over to Spanish Conversation (initially I was pedaling the commuter bicycle, but she broke a spoke after two miles). That would seem like a lot of miles and waste of gas in this age of expensive crude oil, but thankfully Boo gets over 70 mpg so she didn’t even consume two gallons during that time.