At last, Canny has a little sister! She is a 1998 Cannondale CAAD3, introduced when Cannondale started working with the Italian cycling team, Team Saeco, which was led by super-sprinter Mario Cipollini. Her name will be Carrie, since in addition to being a rapid in-town commuter bike and test mule (when I start prototyping some parts), she will be “carrying” groceries and such.

I got her for a song through Craigslist from a former-Texan named Scott of Highlands Ranch, CO. Scott is a cycling enthusiast who used to race Ducatis. He was selling the ‘dale in order to put a down-payment on a brand-new carbon fiber bicycle that wouldn’t beat him up so much. Carrie is the same frame size (53 cm) as Canny and her CAAD3 frame supposedly weighs just a tad less (maybe a quarter-pound at most). Despite being younger than Canny, she is more weathered with a lot more paint chips and a small, insignificant dent in the thin-walled top tube. She does have some rather high-end components, some of which she will donate to her older sister.

The frame features Cannondale’s “Power Pyramid”—a downtube whose diameter gets larger as it approaches the bottom bracket—and ultra-thin-walled 6061-T6 aluminum tubing. Component highlights include a CODA (Cannondale in-house brand) Slice carbon-fiber fork, Dura Ace drivetrain (including 9-speed STI shifters) and a rear carbon Spinergy Rev-X wheel. Some of these components are obviously way too high-end for a commuter bike so I will most likely be re-selling them.

So far (as I write this) I have only ridden her once for a few minutes, and was surprised that despite being newer than Canny and having a shock-absorbing carbon fork and compliant rear Spinergy wheel, the ride seemed to be MUCH harsher! This is with the tires seriously underinflated at 60 psi, too! I suspect the harshness was due to the Selle Italia Gel Flite wedgie-of-a-saddle and tires (treaded Michelin Axial Pro in front and an extremely worn Continental Super Sport Ultra in the rear). In contrast, I just took Canny out for a 20-mile spin yesterday and even with 120 psi in her wonderfully supple Michelin Pro Race2 tires, she seemed to ride comfortably and surprisingly smooth. Odd considering that the Cannondale 3.0 frame was supposed to be one of the harshest-riding frames ever (especially with an aluminum fork) and initially I would have thought the CAAD3 frame was, if anything, slightly more compliant.

[Amendment, days later: I am now convinced the “harshness” (discomfort) was actually caused by the saddle being angled up. I adjusted the saddle so that it is level and now it feels much better.]

Then again, Mario the Magnificent wanted the frame to be as stiff as possible for sprinting, and it was only until the next-generation frame (the CAAD4) that Cannondale introduced S-bend seatstays for a theoretically smoother ride. Cipollini rode what I believe was the CAAD3 to a record-setting 4 consecutive stage victories in the 1999 Tour de France, famously saying after each win, “Cannondale makes the best bikes!” What a racing pedigree Carrie has.

More impressions coming soon after I spend more time with her… stay tuned.

May 13, 2006 Sat: Did a quickie night ride with Carrie after some stem and saddle height adjustments. With 120 psi in the tires, she didn’t ride nearly as harshly as I expected. Seems to have more road feel than Canny which was a surprise, though. I’ll have to ride on rougher roads to see if the carbon fork indeed dampens better. The seat is a bit uncomfortable, but Scott had also tilted it up at an upward angle. Will have to try again with the saddle in a neutral (perfectly horizontal) position.

May 16, 2006 Tue: Did a 20-mile bike ride over Bingham hill with the saddle now in a horizontal position. Tire pressure crept down to 110 psi in the last 3 days (must be ultralight tubes) and I rode the bike like that. Bike did not feel harsh at all and has excellent road feel. It seems like the faster I go, the better the bike feels. She really sings at speed. The Dura Ace STI levers shift absolutely flawlessly with a very light action. However, the slimmer hoods don’t feel nearly as good as Campagnolo Ergopowers in my hand, and I don’t like how I cannot upshift from the bar tops without moving my hands like I can with the Ergos. Minor gripe though. Anyhow, Carrie seems to fly uphills, currently being 2.6 lbs. lighter than Canny (19.4 lbs. vs. 22.0 lbs.), who is wearing 1.1-lb. aerobars at the moment. This weight differential will change as Canny goes on a diet in the upcoming year and Carrie puts on some more pounds as a commuter.

These were the initial components when I first purchased the bike. See “Evolution” section below for changes.

The overall bike weight with the components above is 19.4 lbs, or 2.6 lbs. lighter than Canny when Canny is shod with aerobars!

Evolution of the “Ultimate Commuter Bike 2.0” 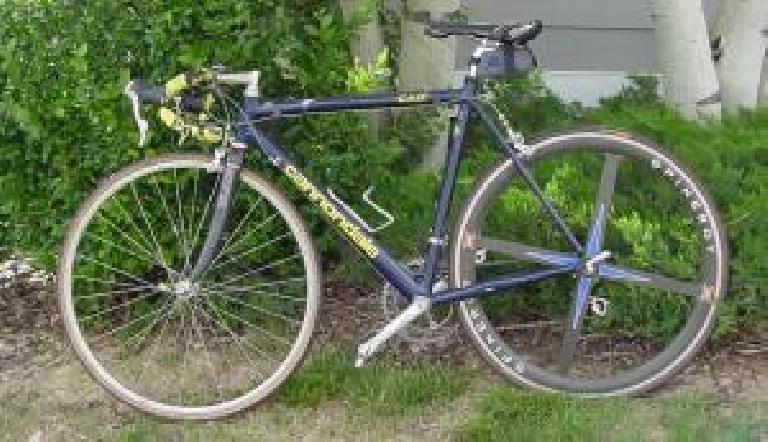