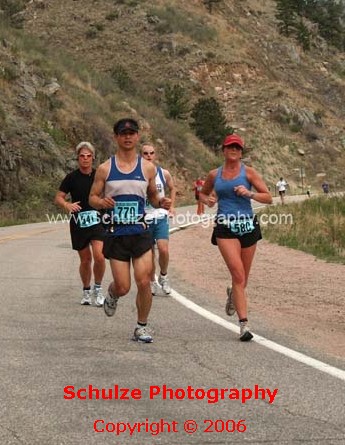 My preparation for this race will probably not be garnering any praise from Hal Higdon, Jeff Galloway or any of the marathon gurus. According to my training log, in the four weeks prior to the Colorado Marathon of Fort Collins, I had run just five times for a total of 28.4 miles. While a mental break and physical recovery were called for after Ironman Arizona, I couldn’t help feeling a bit like a rock star showing up to a big concert, having only sung in the shower a few times since the release of his last album. No matter though—to make up for this deficit of training, I was going to race smart. Real smart.

At least that was the plan. My race savvy was questioned by more than a few friends at 10:00 p.m. on Saturday night, or exactly five hours before I was supposed to be waking up. As it was, here we were in a bar, shooting pool. Prior to that we were strolling—from another bar—through Old Town Fort Collins where frat boys and made-up girls were whooping it up through the streets on their prom night. A little bit earlier we were guttering bowling balls at Chipper Lane. Now we were at Old Chicago’s having a late-night snack. Well, at least I was going to be well-fueled and hydrated…

“Are you really going to wake up at 3:00 am to do a marathon?” someone asked.

Finally, I did say goodbye to my friends and headed for home. Then—after crawling into bed at 12:15 am or so—one of the three alarms I set shook the house at the appointed hour, and I lifted my listless body into the car and drove back to Old Town which thankfully was only 10 minutes away. This was the closest race to home I have ever done, and I was grateful that for once I didn’t need to travel dozens, hundreds, or thousands of miles away to run a marathon on my calendar. Ironic, then, I still had to wake up at such an ungodly hour.

Why so early? The race, for whatever reason, was to commence at the crack of dawn: 6:15 am. However, this being a point-to-point course, all participants had to board a bus to be shuttled to the start. The buses started running shortly after 4:00 am.

At least I was in good company. An attractive, young, blond gal from Colorado Springs sat down next to me, which had the same effect on my energy levels as a couple shots of espresso. We talked for a good part of the ride. The buses were nice too, being charter buses. They had a bathroom which was much appreciated by the well-hydrated runners (virtually all of us), especially since we were allowed to remain in the bus 10 minutes until the start time. This kept our limbs warm and our sanity in check.

Not that it was too frigid outside. The starting temperature was about 45 degrees with no wind, making for just about perfect running conditions.

As I crossed the starting mat with 629 other runners, I reminded myself of my race strategy.

In every previous marathon I have run I had slowed dramatically within the last 6-8 miles, like a rower who had just lost an oar, or a motorcycle with a fuel filter that had just clogged. The second halves have always taken me 10-60 minutes longer than the first. This time, I resolved, I was going to cruise slowly through the first 13.1 miles, and shift up a gear in the second. The goal was an even—or a negative—split.

Making an even split somewhat more difficult to achieve was a first half that was entirely downhill, whereas the last 9 miles of the race was flat. Just a minor complication, I thought.

On the other hand, it was easy to relax as the scenery was, in a word, spectacular. Descending down Highway 14 from the Steven’s Gulch Campground, the course juxtaposed the Poudre River and carved its way through the Poudre Canyon. The air was still with a slight fragrance of pine, no doubt from the numerous evergreen trees here, and the only sounds you could here were the rushing waters of the river which even drowned out the spatter-spatter of the runners’ footsteps. Half of the two-lane road was coned off just for athletes, and the sparse vehicular traffic consisted almost solely of race vehicles. I ran a good portion of the time on the shoulder of the road which was covered with sand or dirt to help minimize the impact of downhill running.

Civilization seemed so far away, and yet I knew that it wasn’t that far. It couldn’t have been. After all, we were going there on foot.

I crossed a timing mat at the midway point of the race with 1:46:11 elapsed. A tad slower than I had hoped, but I was feeling great, the best I have ever felt at this point. Now it was time to start reeling people in.

The first runners in my sights were all women. There seemed to be a lot of them in this race, and a good number of them were ahead of me. This reminded me of an entertaining article in Colorado Runner magazine written by Tom Edwards, entitled “Getting Chicked” that I had read the day before. ‘Getting chicked,’ apparently, was a colloquialism for getting beaten by girls. Now, I have gotten chicked plenty of times—in fact in every single race except for one—and my male ego was actually quite okay with that. This time, however, I tried to motivate myself by seeing just how many of the fairer sex I could pick off.

I decided to make my move at Mile 16, which was traditionally when I used to slow down. This time, I was intent on running sub-8 minutes miles as long as I could. Finally in my sights was a pony-tailed brunette who had passed me twice—once at Mile 3 and again a few miles later, after she had gone to the bathroom—and as I came up to her side, she looked at me, somewhat in surprise, and said hello.

“I feel like a water balloon right now,” she muttered.

“You’re doing good; keep it up!” I replied, not sticking around for any more chit chat.

The next few miles were fun. I passed at least 70 more people, not so much because I had sped up, but rather because everybody else was slowing down. I felt like a late-riser who was just starting to get in his groove after the sun had settled and the streetlights had been turned on.

The next few miles would get harder.

First of all, the temperatures had crept up to the high 60s. More importantly, my legs were tiring, my right foot blistered. My left calf was tight and experiencing the prelude to a cramp, so I started sucking salt tablets every 15 minutes.

There were just a few miles to go and my body had reached what I call “gutter time.” As in, time to gut it out through the pain and finish this thing.

Despite these travails I was still making decent (8:40ish) time and passing people. Mile 24 transitioned to a dirt path off the paved Poudre Creek Trail, which slowed me down a bit more due to now having to watch my step. Apparently, I’m still not much of a trailrunner. Mile 25 passed with my only mile split exceeding 9 minutes.

Finally, I could hear the cheer of spectators down in Old Town, and as I rounded a corner a quarter-mile out from the end, I could see the finish line. I appreciated this straightaway where I could see the finishing banner so far out, as I could time my sprint well in advance, about 200 meters out. As I strode through, the race announcer identified me and then I heard some spectators (who turned out to be a few of my friends) yelling out my name.

3:35:02 had elapsed. This was more than five minutes longer than my personal record (PR) and just my third fastest time thus far. However, this marathon was perhaps the most fun and the most enjoyable one I had done to date.

I also smiled as I realized that my original objective—to run an even split—was almost achieved, with the second half taking just 2.5 minutes longer than the first.

I was hunched over with my hands on my legs when I heard my name called out. It was Ryan… she made it to the race to come watch after all.

As we embraced she noted that I was all wet. Wet, perhaps, but not looking like a salt mine like I usually do. The weather had been near-perfect.

The winner of the race was Michael Wunsch of Ithaca, NY, who crossed the finish line in 2 hours, 49 minutes and 5 seconds. Kara Roy, a native of Fort Collins, made her hometown proud by being the first woman in a time of 2:51:32, shattering the previous race record (2:54) and earning $1300 for that effort.

Finishers were rewarded with medals, souvenir glasses, and Bud Light, one of the title sponsors. Beer as the breakfast of champions? Perhaps not, but it made for a nice post-race treat in this town which is home to several world-class microbreweries.

It was just one of many treats in this race, which included the scenery, weather, camaraderie, and crowd support. I’ll be back next year.

While sandbagging the first half and running a near-even split was a fun way to run the race, I am unsure whether it’s the fastest way to run a marathon. The problem is that by running conservatively in the first half, one is gambling he can make up that time in the second half. In fact, my best time (at the time of this writing, the Mardi Gras Marathon) was achieved by running just over 10k pace for the first 17-18 miles, and then gutting it out the last 8-9 miles. I think I will be reverting back to that strategy and just rely more on training to ensure that I am not fading too soon in the race.

felix, you did very well!! congratulations!! maybe i should run my next marathon after only 3 hours of sleep, too. ;) ↩ Reply