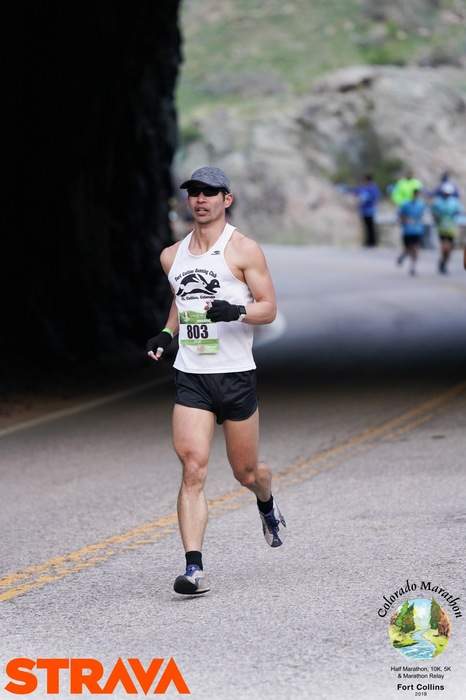 “I’m happy with how it went especially for the amount of training I did,” I observed immediately after this year’s Colorado Marathon. “If I trained twice as much I probably could have cut off 10 minutes, but at this point in time, it’s not worth it.” Other priorities, you know.

Indeed, this race—which I had signed up for largely because my friend Antxon was flying all the way from San Sebastián, Spain to run it—went as well as I both hoped and expected. Well, almost.

Hit all the tangents and take the shortest line between the cones and shoulder: check. Run the first half comfortably while achieving a half-marathon split under 1:40: check. (1:37) Maintain a steady pace and keep the heart rate down while going over the Colorado Marathon’s very own version of “Heartbreak Hill” at Mile 19: check.

Have 40 minutes to run the last 4 miles to hit my sub-3:30 goal? Nearly so! (~39 minutes) This is when I started to have to dig deep as my right hamstring completely cramped up, prompting a walk for about 8-10 seconds to wait for it to un-seize and mile splits had begun to exceed 9 minutes for the first time all day.

My friend Alene—who was spectating and cheering—had seen me a quarter-mile earlier. Based on her remarks, I must have looked like a sports car with a couple clogged fuel injectors. “This is about the only time I’d be able to keep up with you,” she joked, running along the side of the trail for about 10 seconds.

Fortunately the hamstrings stayed unlocked, including for an unwelcome surprise with three-quarters of a mile to go: a hill by Lee Martinez Park. Years ago I had noticed that someone created a Strava segment for this undulation, and I laughed because it was only 0.07 miles long. It’s not even 200 meters, for crying out loud—why bother creating such a segment for a time-trial? Well, today at that hill, I wasn’t chuckling; I was grimacing. It took 48 seconds to go up it. That’s not sufficient time to heat up a mug of water to make tea, but long enough to induce many moans and groans between breaths.

With 400 meters to go and the finish line in sight, I then had a second surprise. A petite 57-years-young lady named Mercedes was suddenly at my side. I hadn’t seen her all morning and must have been ahead of her the whole race. Not anymore.

“Hi Felix,” she said while passing on the right.

Mercedes is something of a local running legend. Before 2017, she always beat me in races, usually blazing by at some point in the event. (E.g., this 5k race in 2008 where Mercedes and I finished 1st and 4th overall, respectively.) But then it seemed like age had finally—finally!—caught up to her. Or maybe she was just taking it easier.

Whatever the case, here she was once more. Back for another late-race battle. One that she’d again win, as I didn’t have enough left in the tank to summon a strong-enough sprint. By the time I had fully accelerated with 100 meters to go, she had jacked up her speed as well, stepping across the finish line 4 seconds ahead of me and 12th woman overall. Amazing.

I could do nothing but smile and shake my head in the finishing chute. Chicked by a 57-year-old. At least I didn’t get beat by any 12-year-old punks this time. Or anyone too young to vote for that matter.

Friends I found afterwards had pretty epic stories about their races too. Antxon, for example, had a sub-3-hour goal and ran the first half in a blazing 1:26, but then the thin air he was unaccustomed to made him stop and walk about 30 times in the second for a 3:21 final result. Still a good time.

Jen F. reported running the first half in her fastest half-marathon time ever, but that her legs “were done” at Mile 20… and that before then she had to take an extended “dump” break at a port-a-potty. Nevertheless, she finished in 3:19 to both pass Antxon and finish as third woman overall! [Jen’s race report]

Also really impressive was Carl, who was running his second marathon ever. He said his knees were in pain and he resorted to Advil, yet he beat his 3:45 goal by 3 minutes. “When did your knees start hurting?” I asked. “Pretty much from the very beginning,” he replied before adding that he’d probably run a marathon “never again.”

I enjoyed talking with Carl’s dad, a doctor specializing in internal medicine, while we drank beer. I mentioned how I frequently experience loss of sensation in the shoulders, arms, hands, and even face during the last few miles of a marathon, and he said it was because of respiratory alkalosis. It’s a condition that occurs when you are breathing so hard that the level of carbon dioxide in the blood decreases, thereby increasing the pH level of the blood. He said it’s not permanently harmful; indeed, it reminds me of the alkaline diet fad that entailed eating primarily alkaline foods and regularly measuring the acidity of your urine with pH strips. However, it causes nerves to undergo temporary partial paralysis, explaining the numbness I was getting.

“How can a person mitigate it,” I asked.

“You can try to slow down the rate of breathing and purse your lips,” Carl’s dad suggested. Carl added, “Or you can breathe into a paper bag.”

It may be something to try next time. Well, maybe not running with a paper bag over my head.

This is the first year I hit my goal time in this race. It is a difficult race for predicting your time and can be described as deceptively hard. The course is more difficult than the 1200-ft. net elevation loss suggests, particularly because it starts at 6200 feet in elevation. Also, the second half is 1) not as downhill as the first half, 2) much more exposed to sun and is warmer due to the lower altitude and time of day, and 3) has a couple of ascents that come at inopportune times. This is truly a race of two distinct halves.

The course profile actually reminds me a lot of the fabled marathon in Boston, albeit with entirely different scenery and much smaller crowds. In fact, my split times for the first and second halves were virtually identical for this year’s Colorado Marathon and the 2008 Boston Marathon.

Wooo! Thanks for the shout out! :) And my awkward-duck picture. Awesome article! Definitely agree that the course is deceptively hard. I think the pacing is difficult because just booking it down the hill is super tempting but it doesn't do your quads any favors on the back half when things flatten out substantially. It's like a balance between money in the bank for that and overdoing it....I know a few people who hardcore crashed at mile 20. ↩ Reply