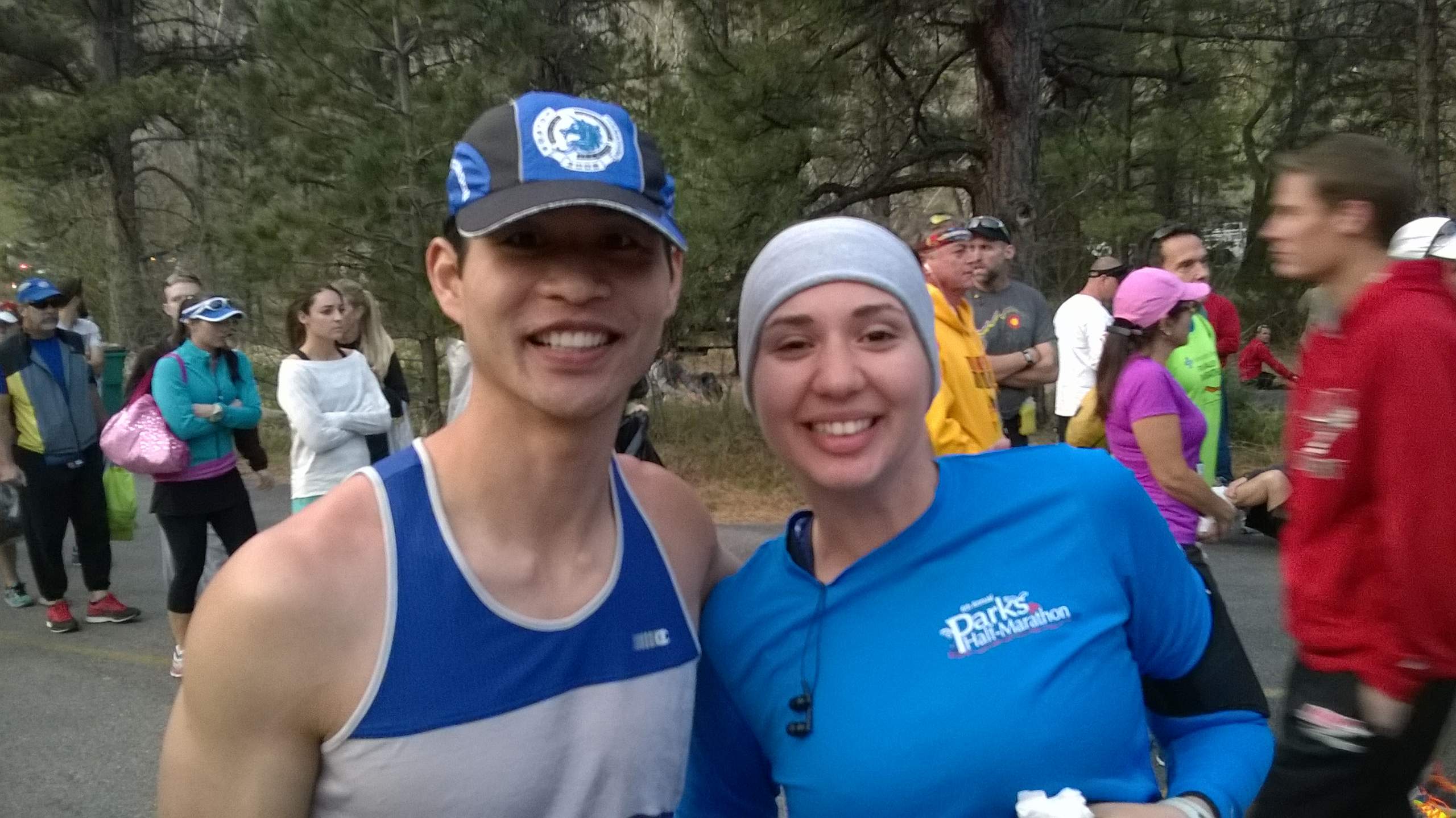 Well, this was supposed to be the marathon where I returned back to form. Not long after moving to Fort Collins, I have taken running sub-3:30 marathons almost for granted, but that hasn’t happened for one reason or another since 2011. In fact, it was at this very race three years ago where I completely faded in the second half, but still managed a 3:18. The course is so quick that I even managed to convince Bandy, a buddy back from high school, to sign up for the race after we ran Las Vegas last November. Neither of us were fully satisfied with our performances in that marathon (his first), so this would be something of a race of redemption.

Furthermore, a bunch of my doctoral psychology friends signed up for the 26.2-mile race. So this was going to be our running highlight of the year, right? Wrong.

The race turned out to go very wrong for me, in fact. Probably the biggest marathon disaster I’ve had to date, particularly because this time I had actually trained. My speedwork and long training runs went brilliantly, and aside from a February setback where I mysteriously strained the right calf after running just 1 mile the day after a domestic flight, I actually felt I had done decent preparation. My expectations thus started out pretty high and they only went higher after I saw the forecast for the race which included a tailwind of 12 miles per hour. It’s kind of funny to think about it after the race, but I was actually thinking “back to Boston,” for which I’d have to run 3:10 or better.

Anyhow, the bad news started when every single one of my psych friends decided to drop down to the half-marathon distance due to injuries, lack of training, pregnancy, etc. The lone exception was Diana, which was a bit ironic considering she was the last (and most hesitant) to sign up and yet she ended up being the last one standing.

Then Bandy decided to drop down to the half-marathon distance due to a shin splint that’s bothered him for the last few months. His wife Sara also stayed home in California instead of racing the 5k, also due to pregnancy.

Then, in utter stupidity, the day before the race I played sand volleyball at CSU in the hot sun, not only getting slightly sunburned, but very dehydrated. I tried to compensate for all that by having pho for lunch and drinking tons of water, but that kind of backfired as when I woke up at 3:40 a.m. the morning of the race, I had “the runs.” Not good.

A chain of disappointments ensued:

And there were still 13.1 miles to go! If the race had made it easier to drop out—SAG vehicles or a looping course, for example—I may have seriously considered doing so, but as it is, I really hate to quit. So I kept going, trying to remind myself that this really wasn’t much different than, say, running the second half of an ultra-marathon or the run leg of an Ironman triathlon.

In other words, in the state I was in the second half was a virtual death march. I was still running—only walking five or so times at aid stations where I usually had to drink three cups of water or “Gatorade” (Gatorade would have tasted much better than whatever sports mix they were using)—but I must have been overcompensating for the gimpy calf with my arms or something as my shoulders and back were soon killing me. The pain in those places was actually greater than in my legs.

Meanwhile, the promised tailwind never materialized and instead there was a slight breeze in our faces. Spectators were offering encouraging words, but it was embarrassing to have people watch how slowly I was going. I couldn’t even go a 12-minute/mile pace at Mile 22 and 23! But at Mile 25, I was able to muster the resolve to do a 9:07 mile, and the last 200 meters at 6:47/mile pace. That was the best part of the run since it was how I envisioned I would run the last little bit.

I crossed the finish line after 4h19m27s, which was a whole hour after I expected to finish. Disappointing for sure. But if I thought my misery would end with crossing the line, I was wrong there too.

Bandy (who successfully completed his half and waited almost two hours for me to finish) and I went back to my place, where I promptly collapsed onto the floor of my bedroom and fell asleep right there and then, next to (but not on) the bed. After an hour, I decided I was being utterly ridiculous and had to get up and take a shower as Bandy and I had Victoria’s post-race party to go to. My napping made us miss most of it already.

Fortunately I got up when I did because when we arrived at the party, Diana was already on her way out and I was able to catch her just in time to congratulate her. She had finished her first marathon ever in a time much quicker than she had imagined (5:10 or so). I was very proud of her.

But I must have continued to have dehydration or some sort of electrolyte imbalance because I felt woozy, nauseous, and seriously feeling like death the rest of the day. I even needed another two-hour nap before I could drive Bandy back to his cousin’s place 50 minutes south of me. During that time on the couch, I was breathing hard just resting and could not muster the energy to get a blanket even though I was shivering. It was probably the worst I have ever felt after a race.

It would take me a couple more days (and a massage appointment) to recover, but at this point it doesn’t seem like I had done any long-lasting damage. Except for maybe the sunburn from volleyball. Even though it was minor, I am cognizant that even one or two sunburns can double one’s risk of skin cancer. I’ve got to avoid sunburns at all costs.

Other good news: Bandy’s cousins/relatives Chakriya, Lee and Leanne all came up to run the 5k, their first. They all finished, running the whole way. I’m proud of them too. Good job, you three!