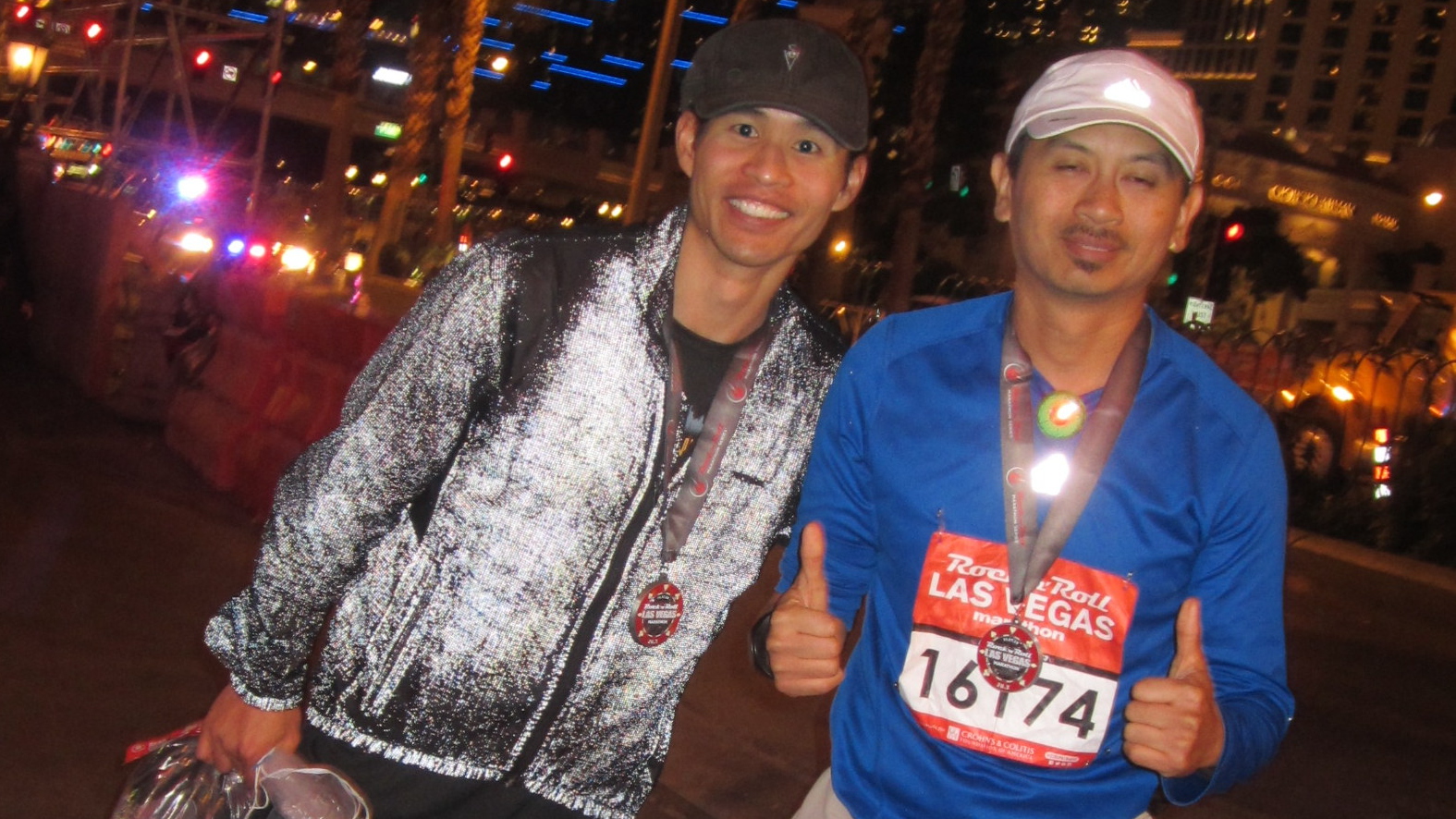 Call it an experiment. As inspired by the Running Faster and Farther chapters of Timothy Ferriss’ book The 4-Hour Body, I decided to try a new training approach. It amounted to not running much or far, but try to run like Usain Bolt during every single workout.

I had the first part covered. While I ran a little bit during August’s Europe trip, I regressed in September again and didn’t actually start training until the beginning of October. This gave me five weeks to train before the Rock ‘n’ Roll Las Vegas Marathon, in which I ran 50.5 miles. No, not 50.5 miles/week, but total! But every workout included multiple sprint intervals ranging from a minute to 1m45s or a time-trial, usually on the weekends.

My longest run, in fact, was 8.7 miles with my friend Hector. This included a bunch of intervals on the Spring Creek Trail in which we yo-yo’d back and forth like the tortoise and the hare.

Tim Ferriss’ rationale for this sort of training (designed to save a person a huge amount of time) was to simply “move the aerobic line”—the point where a person would have to go anaerobic in order to maintain his speed. Despite the low volume, I actually felt by race day that, as a result of the speedwork, my legs were at least as well-tuned as a hot-rodded 1970s Chevy Vega. I looked forward to seeing whether I could beat my last three marathon times, in which my total training amounts were hardly any more.

My dream goal was beating the 3hr34min result of September 2012’s Bismarck Marathon. Funny how I was disappointed in my finishing time back then, but would have loved to do that on this day.

Bandy—a good friend from high school running Las Vegas as his very first marathon—and I hit three buffets in the two days preceding this race, so you can be assured that our energy reserves were topped off and then some. “I think I’m all buffet’d out,” was something my buddy and I said out loud on more than one occasion.

I started in the very back of my designated Wave 5 (of 30 or so)—somewhat as a result of getting there at the last minute as I didn’t realize the distance from the porta-potties in the staging area was a good half-mile—and consequently ran the first few miles much slower than planned as there was just too much human foot traffic. I was hoping, though, that this would help me later in the race by conserving energy early.

One curious thing was how the official pace-setters were running. After a couple miles a 3:40 runner from Mexico passed me, but a couple miles later, I passed another guy holding a flag-on-a-stick reading 3:45. A few miles after that, another one. The pace-setters, then, were a bit scattered and picking the “best” one to follow was much like playing Russian Roulette, it seemed. Ah, well, this was Vegas after all.

A better indication of my pace: the halfway mark, which I passed in just under 1:44. It seemed like my days of running the first half of marathons in the low 1:30s were long gone, at least for now. By this point, nighttime had already fallen, setting up the stage for the nickname of this race: “Strip at Night.”

I did feel amazingly good at Mile 14 and 15, however, and judging by how I was passing a lot of people, felt like I was speeding up. In fact, I was merely being delusional. This would be hammered home when, at Mile 16 or 17, a 3:45 group I had passed miles earlier trotted right by me.

“This is going to be a slow mile,” I heard one of them say. It would go even more laggardly for me.

My legs were getting noticeably tight from that point on, but I kept on chugging. I was able to keep on pushing until a few miles ago, when I had to dig deep just to keep my legs running. I chanted a 180 step-per-minute six-count in my head to do so.

Soon enough, I could see the finish line outside the Mirage in the distance, but I couldn’t pick up the pace. At least I was running a little faster than the half-marathoner stragglers who were now to the lane to the left.

With 200 meters to go, I attempted to commence a sprint. This resulted in a massive left hamstring cramp with about 20 meters to go, and I basically had to hop to the finish line on my right foot like this was a hopscotch competition. Done.

Sort of. I still had to mosey out of the finishing chute, which was the longest one ever (about a mile). I could only shuffle my feet forward inches at a time for the first five minutes and even had to answer questions such as “Are you all right?” from concerned volunteers. After replying affirmatively to all of them, I chugged a bottle of water, a bottle of Gatorade and a small carton of chocolate milk before eating two PowerBars and a bagel. Amazingly, I was still hungry for dinner a couple hours later, which I’d have with Bandy and his wife Sara.

Speaking of which, Bandy successfully finished his first marathon despite having cramps from Mile 17 onward. Congrats to my bud!

My final time of 3:48, while 45 minutes off my personal best, was in fact quite a bit quicker than my last three marathons. Since my training volume for all these marathons were about the same, I declare the training “experiment” a success… sort of.

The severe slow-down at the end still occurred at about the same points—first, Mile 17 and then another big drop-off at Mile 23—so I can only conclude that my endurance wasn’t improved at all. Intervals and time trials are no substitute for long runs, it appears.

But they are an efficient use of training time, and time trials can actually be fun, especially Strava segments.

Perhaps the best balance between reducing training time still maintaining good marathon performance (i.e., not too far off by personal best) is doing intervals/time trials 2X a week, and long run (which I’ll define as 10-26 miles) once a week. I’ll be trying this for my next marathon, in addition to starting training a lot more than five weeks out. You can call that another experiment.